The next major roadtrip brings the Didimobile back to the British Island. On our last visit to England a great fan friendship arose between the Nottingham Panthers‘ and Hamburg Freezers‘ fans, and therefore seven Hamburg icehockey fans decided to travel to the British EIHL hockey playoffs in Nottingham on the first weekend in April, 2015. The youngsters are going to travel there in proper style by Didimobile and since it is the time of Germany’s easter holidays they will go on a roadtrip through Wales with “Daddy Didi” afterwards. “Mum” prefers to fly by airplane. It is amazing how fast you become a real family when it is only about getting a cheaper family ticket for the playoffs instead of having to pay for four single admission fees… 😉

Today is the last day of school before the holidays start. Didi has already prepared the campervan for the journey yesterday and filled up the food supplies, the box of Fritz Kola is bought on the way to the foster son. The weather forecast could not be worse: 15 days of constant rain on the island, gale at home. Just the normal April’s weather. 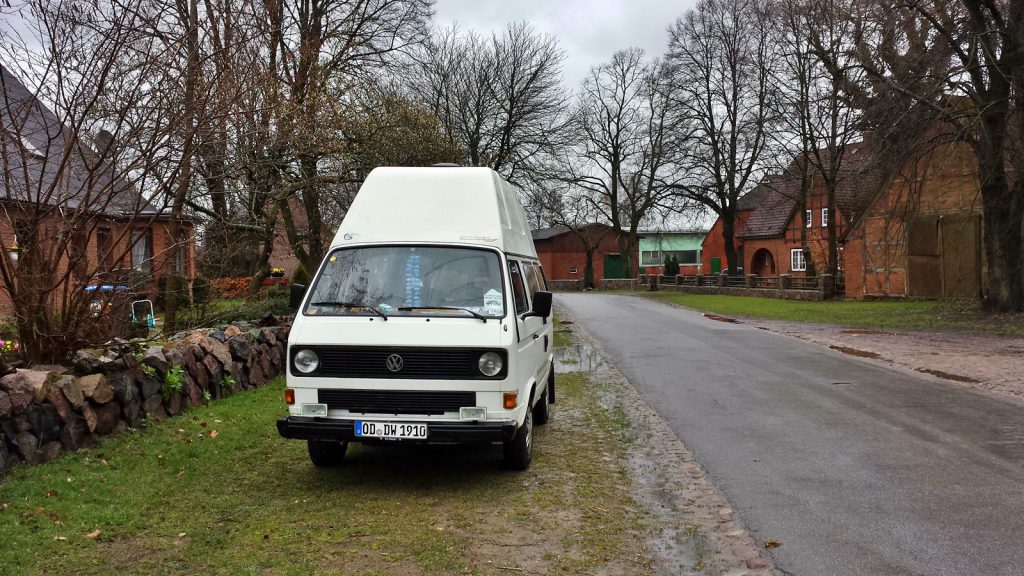 Typical Hamburg weather, ready to set off for the Wales adventure

At 4pm both boys have been picked up. Driving the Didimobile is a pure disaster today, the weather forecast shall prove true with its gale warning. We cannot do more than 60kph, several lorries have already been blown off the Autobahn and the news report of flooded underground lines in Hamburg and accidents with fallen trees. Nonetheless we want to drive as far as possible today since we have booked the 17.00-ferry the next day with check-in closing at 16.30.

So we are driving all the way against the wind until Zwolle in the Netherlands, where we find a nice camper site at a marina. Getting to the power outlet is quite difficult here because nearly all outlets are either under water or only accessible by means of rubber boots or dinghy. It is still stormy and rainy and not really warm at all, and to make matters worse our auxiliary heating just packed up. Since we are standing alone on the site we keep the engine running, need is the mother of invention.

That was a close call!

At nine o’clock the alarm goes off. Concerning the need to sleep, teenagers seem to be even worse than I and thus I am sent forward to test the shower block. When I come back to the Didimobile at about 9.30 our future is still lying in bed though we have to start at ten to reach the ferry in time. 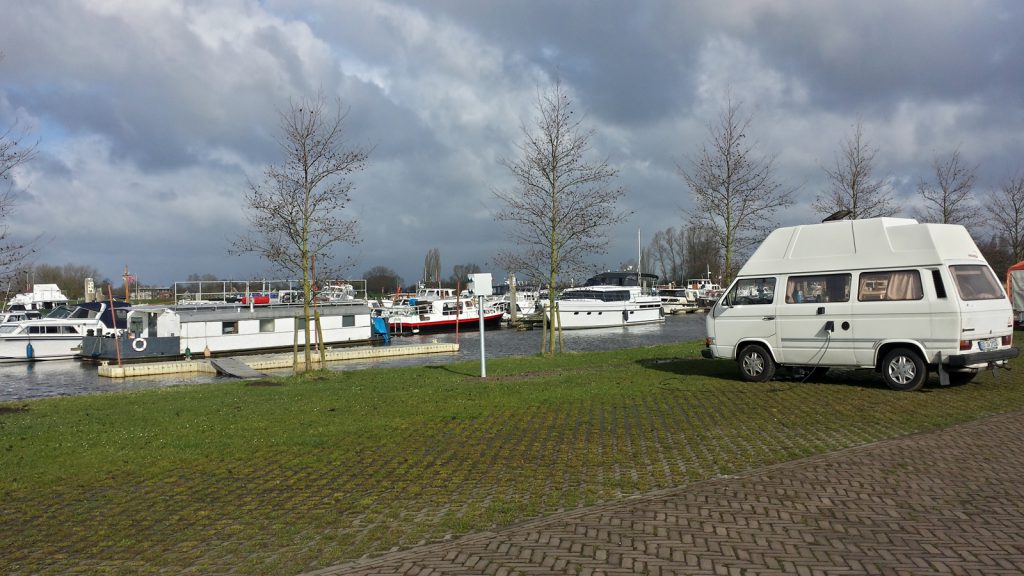 A good 15 minutes after our projected departure time both of them finally come back from the showers so that we can leave nearly on time. Breakfast has to wait.

The wind lessened a bit, for us Northeners the “smacking breeze” became “a bit windy”. All others would probably call it “storm”. Traffic is quite dense on the road, especially near larger cities like Utrecht or Antwerp we get stuck in traffic and lose about an hour of precious time. Gent, says Didi, could easily be mistaken for being Bruges instead, and so he moronically follows the signs to France. As this area of France does not look as dull as it actually should (the Didimobile has been there half a year ago) Didi slowly realizes that he might have lost the way which unfortunately proves true. Still 135 kilometers to Calais and only a good hour until the ferry leaves. If we miss it we will have to wait for three hours and have to pay another 75,-€ for a new ticket.

Poor Didimobile. It does barely 110kph at completely floored gas and beaufort 8 from front and has to keep it up for a whole hour. In Bruges the monotonous motorway to Calais is found easily and on the way insults are hurlt at each other: the kids think it was all Didi’s fault because of his lack of orientation, Didi says it was the the boys’ fault because they didn’t get up in time. In the end both, the 15 minutes delay in the morning or the 15 minute detour, could be significant.

With sweaty hands (you have to hold tight of the steering wheel in this wind) we reach the ferry terminus at 16.28, two minutes before the check-in closes. And what awaits us here? Traffic jam at border control! 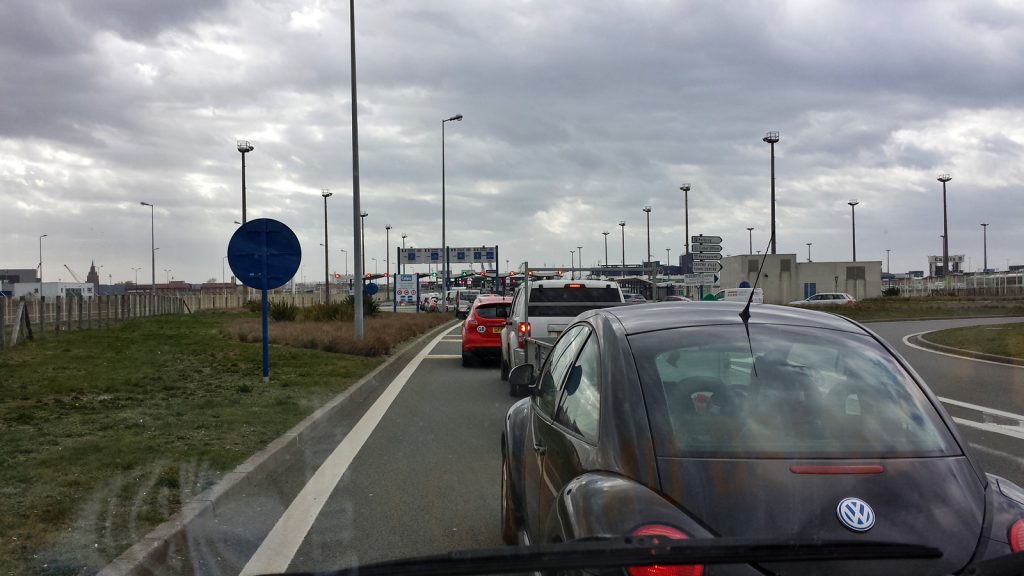 The border official has a brief look at our passports and opens the sliding door to make sure that the youth firefighter really looks like his photo in the passport before we are allowed to continue to the check-in. Ticket shown, row allocated and shooed towards the ferry with a harsh “vite, vite!”. It is 16.57, loading is in full progress. A single delivery van arrives behind us. Directly afterwards the bulkheads are shut and the ferry pulls away on time at 17.00.

Despite the still persistent “bit of wind” the waves are not really high, and during the next 1.5 hours the vessel is swaying gently towards Dover.

On the internet we had spotted a small campsite called Sunnyside Farm near Chillham. At our arrival we find a small note hanging on a fence with our registration number and the remark: Pitch #1. 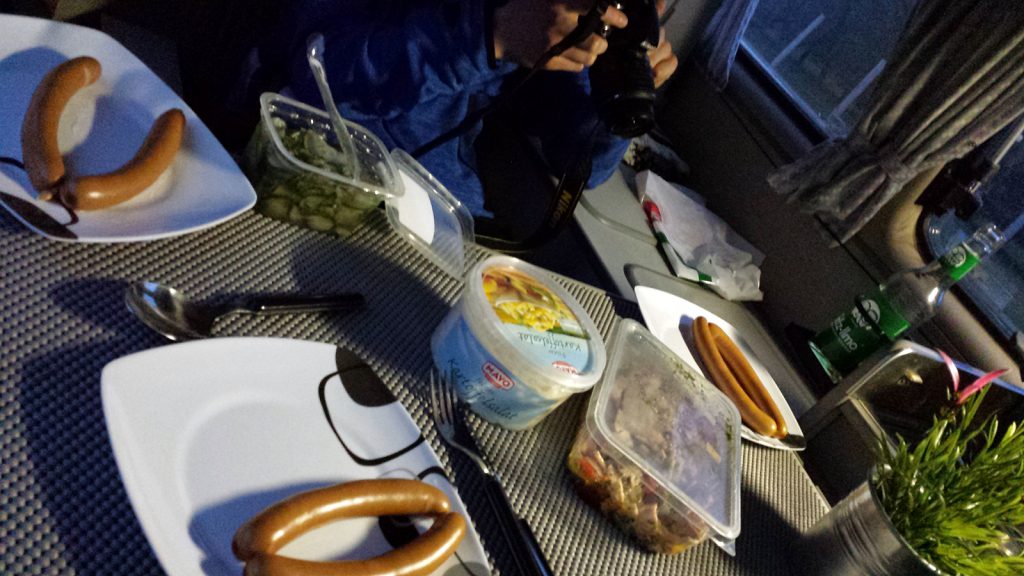 For dinner we have sausages with cucumber-, noodle- and potato-salads before heading to a nearby old, rustic pub for a beer or coke. “The George” is decorated with all kinds of medieval stuff, sending the visitor back some centuries, especially due to a knight’s armour standing in a corner. 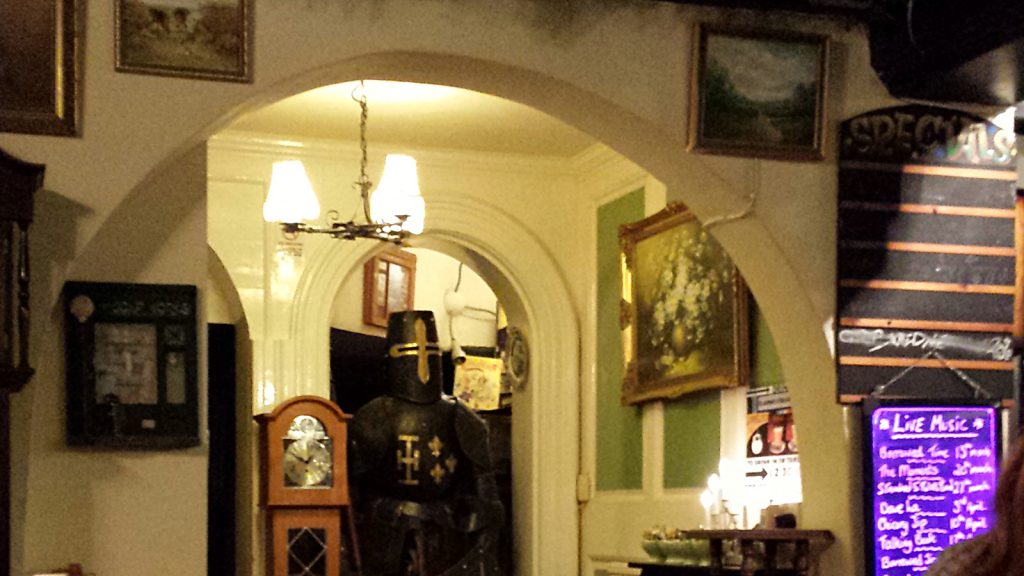