A good week has passed after we returned from our Scandinavian roadtrip, and again five Hamburg Freezers fans have gathered to follow “their” icehockey team to its last Champions Hockey League away game in Nottingham, England. Of course the Didimobile has to come along, too, but this time we will be travelling in two cars since the Didimobile only accomodates a maximum of four people.

The game is scheduled for Tuesday evening, September 23rd, 2014 at CapitalFM arena in Nottingham. On Sunday, September 21st, and on Friday, September 26th, 2014 respectively home games take place at O²-World arena in Hamburg. Thus the time frame for the tour is already set.

On Sunday evening – it is one of the late games commencing only at 17.30 – we gather after the end of the game at 20.30 at the parking lot. We take some souvenir photos and receive the best wishes for the game from some fans who will stay in Hamburg, and after a brief agreement about our route we set off into the night. The ferry from Calais to Dover is scheduled for 7pm tomorrow evening, so we should have lots of time for the 800 kilometers to the ferry port.

The A1 Autobahn is enjoyably empty and we proceed smoothly through the night, doing a first break in Osnabrück. Actually we had planned on spending the night around here, but at the time of planning we thought to having been able to start at 18.00 already. To my delight all of my fellow travellers are night owls and noone is really tired yet, so we decide to keep on driving until around 1am and look for a spot to stay overnight then. We find a small caravan site at Raesfeld near Dorsten with a (cold) shower and a toilet.

Normally night owls are morning grouches which proves to be true for our small group. So we get up nearly well rested at nine o’clock. We don’t have any time pressure since we have driven about two hours further yesterday than originally planned, which saves us about two hours of driving today. 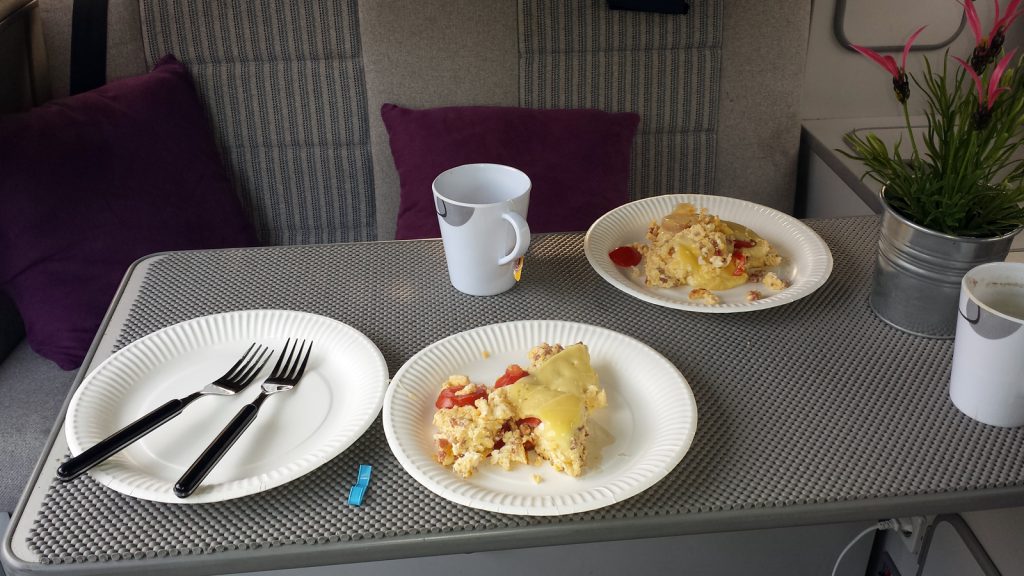 For breakfast we have selfmade omlettes with cheese and tomatoes, which are more than delicious. To take a top chef along was a brilliant idea.

At ten o’clock we set off for Dover and cross the Dutch border an hour later.

Where are all the caravans?

Under normal conditions the Didimobile does about 95 kph, nontheless we still cruise at pace despite high traffic density. But something is strange on Dutch motorways. No, it is not the yellow number plates, it is the total absence of caravans! During the almost 100 kilometers through the Netherlands we do not see a single caravan, and the only motorhome we come across has got a German registration. We think we know where they all might be… 😉 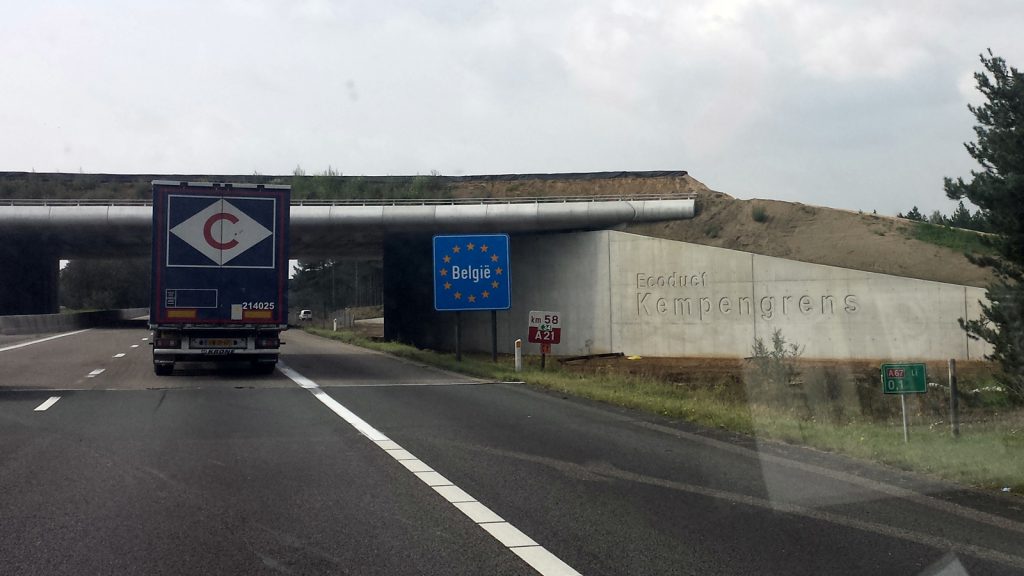 A good hour after crossing the Dutch border we are already leaving the Netherlands and enter Belgian territory. The scenery is not much different from the Dutch one, we see flat lands and monotonous landscapes. At least petrol prices are pleasingly low and so we stop for a short refill in a village named Malle. Malle is the German abbreviation for the Germans’ favorite holiday destination, Mallorca, so we turn up the volume of our CD full of German hits from Mallorca.

The shortest route to Calais leads us over a bumpy country road “made in GDR” and we are thoroughly shaken when we arrive in Gent. Once in Belgium we want to eat an original Belgian waffle here in Gent, but unfortunately it is a national holiday here, or Belgians just don’t work on Mondays as a matter of principle, but we cannot find a single open shop or café. Strange country. 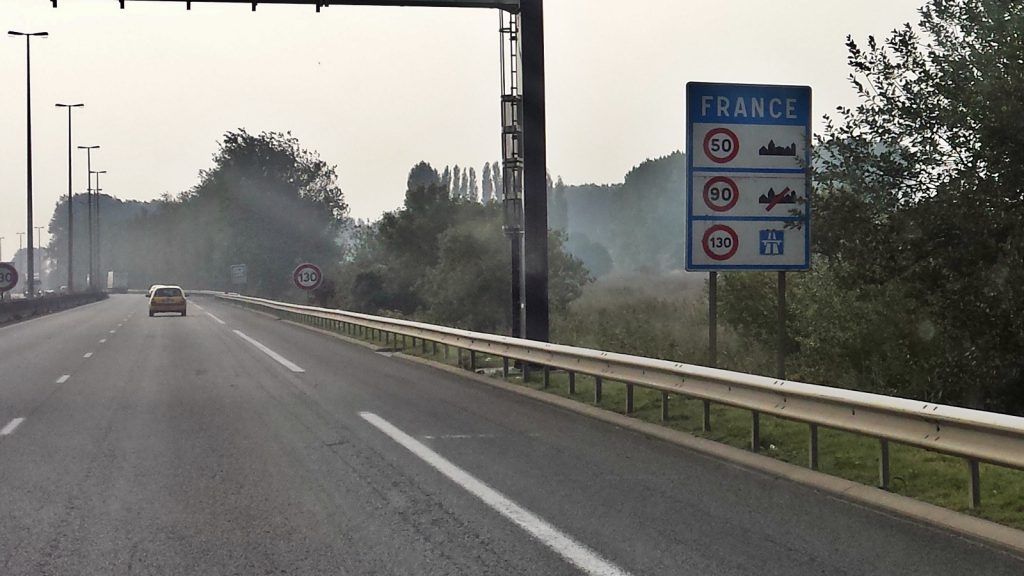 It is half past five when we cross the border to France, the fifth country within only a few hours. It’s scenery is even more depressing than the other two Benelux countries, and only the frequent “Rappel” signs cheer us up from time to time (the German word “Rappel” means “tantrum”… 😉 ). After about an hour we arrive at the ferry port of Calais way too early, because we incorrectly thought the ferry would leave an hour earlier. Now we have to wait for two hours, but luckily the Didimobile has two bunk beds inside so we can just relax for a while. 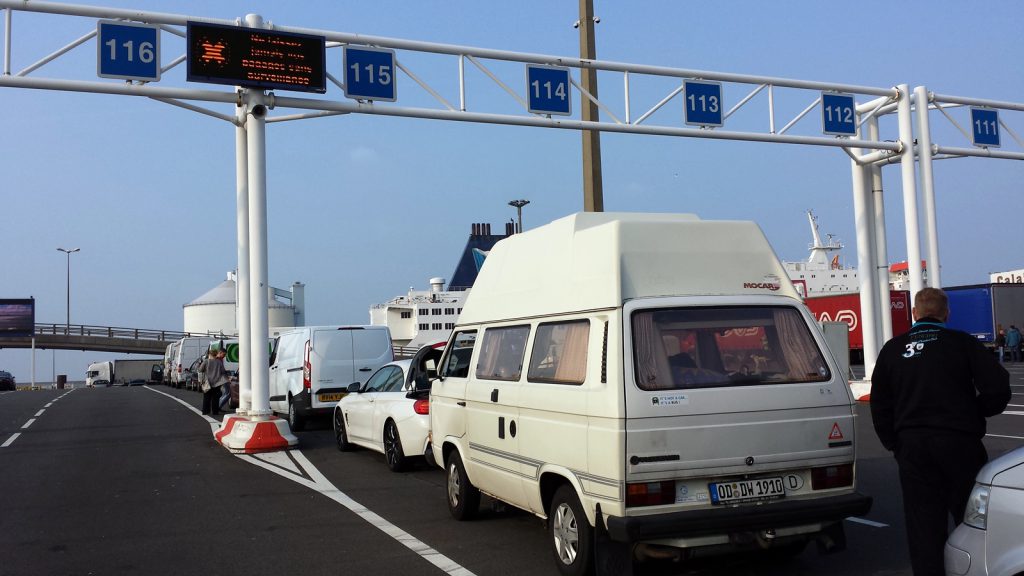 Waiting for the ferry at Calais

The ferry is on time, boarding is trouble-free (the Didimobile is used to travelling on a ferry since Scandinavia) and the 1.5-hour journey proceeds smoothly and relaxed. Once we spy the White Cliffs of Dover we have to change the time once again, because on the island they are within Greenwich Main Time zone being an hour late compared to mainland Europe. Thus the ferry passage only takes half an hour. 😉 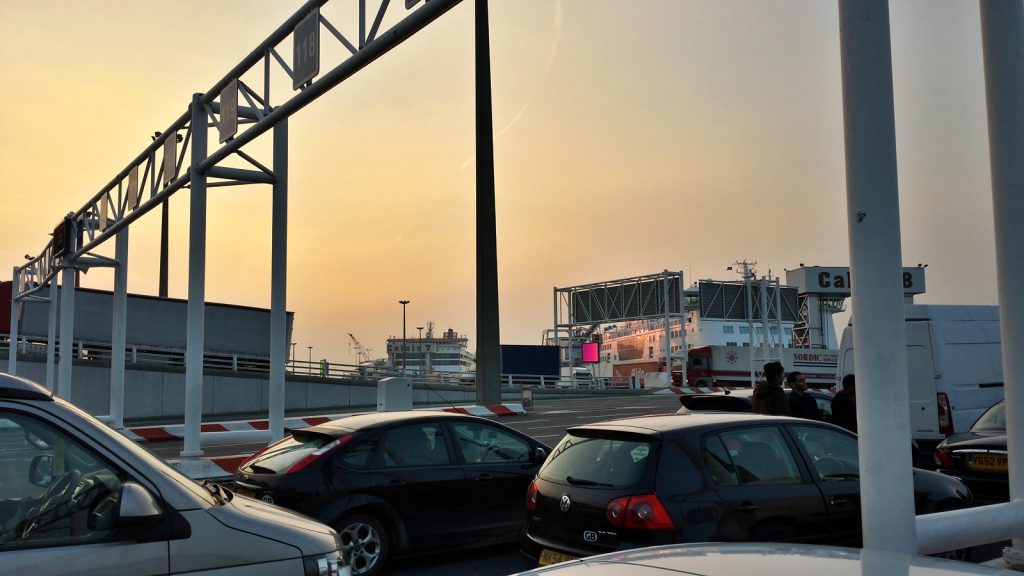 Once the docking manoeuvre begins in Dover, Didi starts to become slightly nervous. Normally I would say I am a quite good driver and I love challenges, but when it actually comes to driving on the “wrong” side of the road for the first time ever I would preferably hide inside the trunk. The trunk of another car. Far away from England. 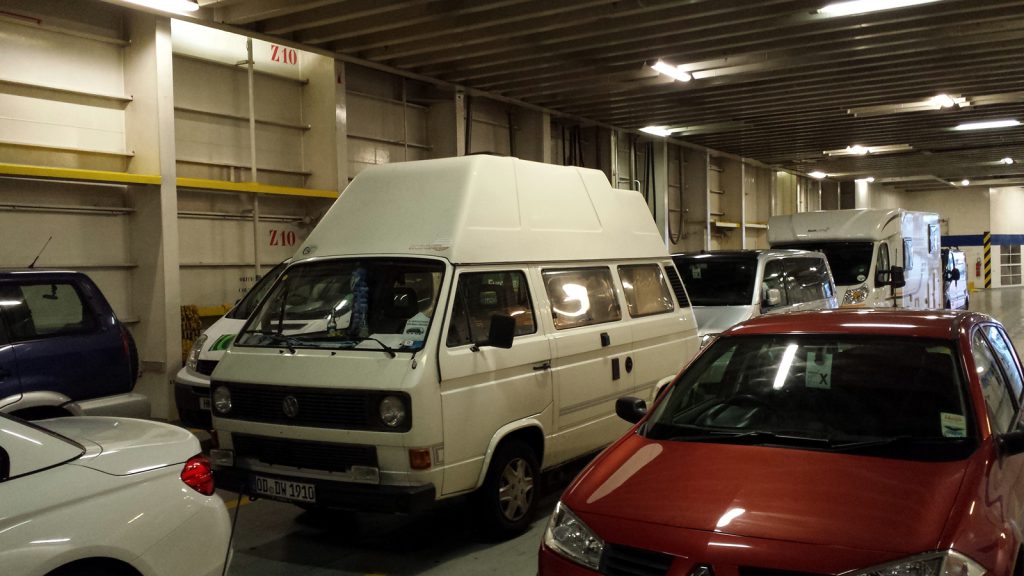 Fortunately, getting on the wrong side of the road is nearly impossible due to intelligent traffic routing within the harbour properties. Along one-way roads traffic is guided towards the main roundabout which you can only leave onto the correct side of the road. Only for the co-driver could this be worse since oncoming traffic suddenly appears on his side. ^^

Directly behind Dover we look for a nice campsite for the night, so we can avoid having to drive on the wrong side at nighttime on the very first day.