What a great thing it is to be able to sleep long in one’s holidays. Around 10am all three of us are awake by ourselves so we are giving the showers with their abominable many bathroom fittings a try. The upper knob controls the temperature, the one in the middle does the same but at the same time it also regulates the intensity of the water jet and the third knob somehow does nothing at all. Nevertheless, it is comfortably hot. 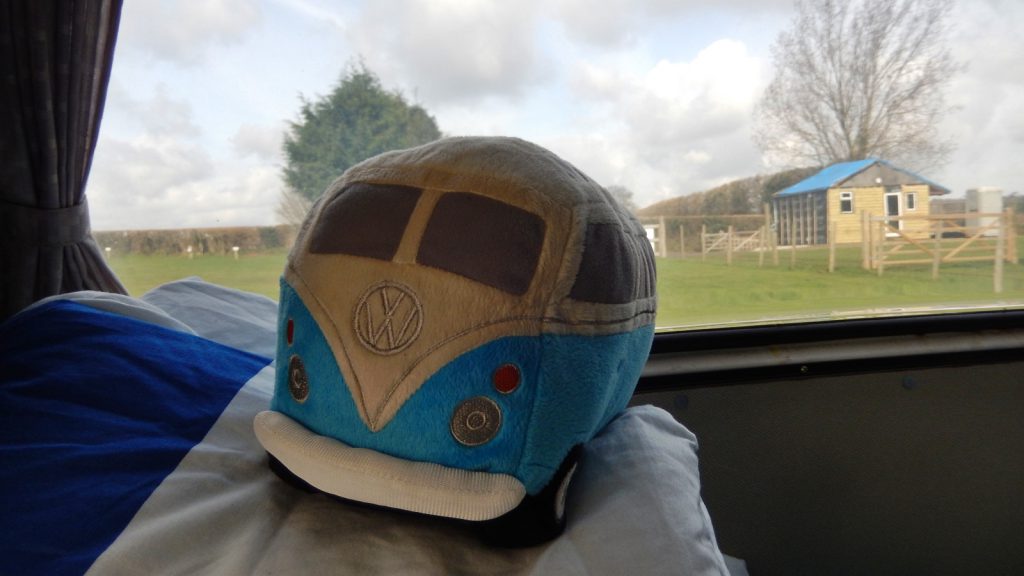 Good morning from inside the Didimobile. The shower block is in the background.

Looking for some breakfast means exploring our neighbourhood. We have intentionally started a day early to be able to see more from England than only the motorway.

The first village we are passing through is Chilham. A very tiny village with very tiny, old houses. A place where time seems to have stood still for a long time.

We park the Didimobile in the village square in front of the local manor to explore the hamlet on foot. Immediately we spot a small pub called Shelly’s Tea Rooms where we have a delicious breakfast.

The architectural style of the 15th century church is typical for many English villages, and at the cemetery, gravestones dating back to the early 18th century are still standing.

On we go down the main road, which is simply named The Street here, passing along 300 year old cottages. Without all the parking automobiles, a typical British phone box would be the only evidence that time travel has not been invented yet. 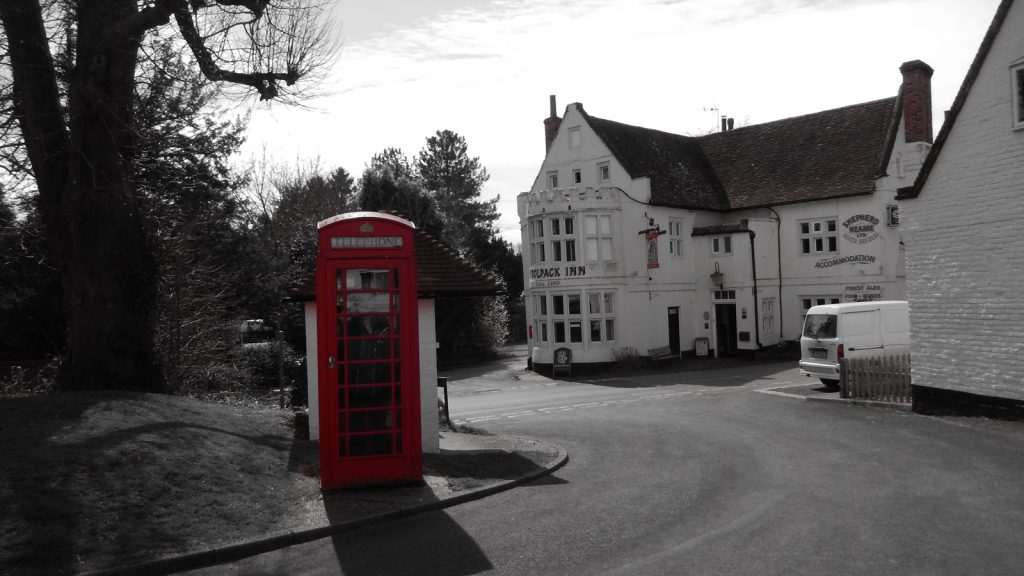 The weather has started to show its best side and so we decide to do an excursion to the famous White Cliffs of Dover. 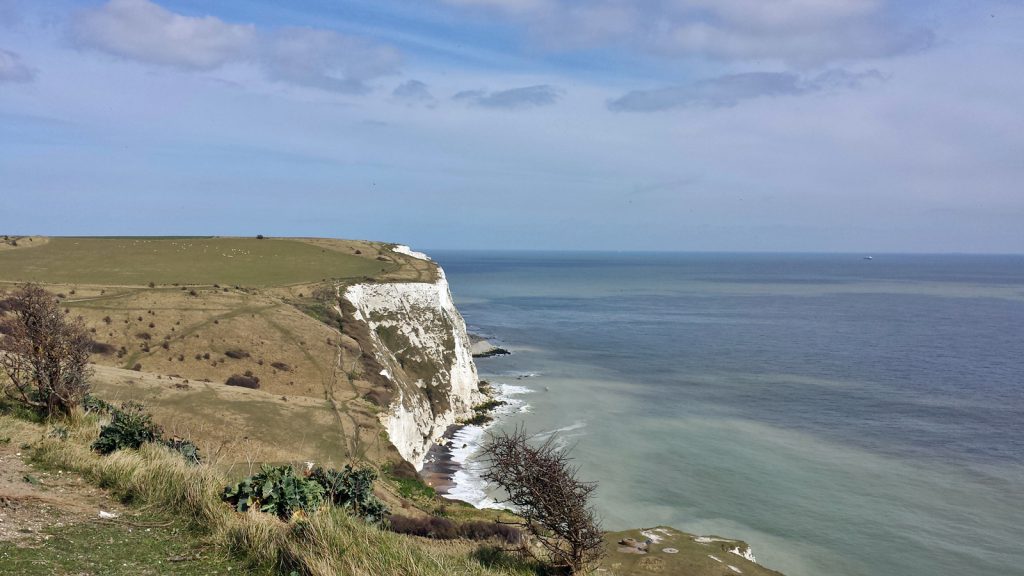 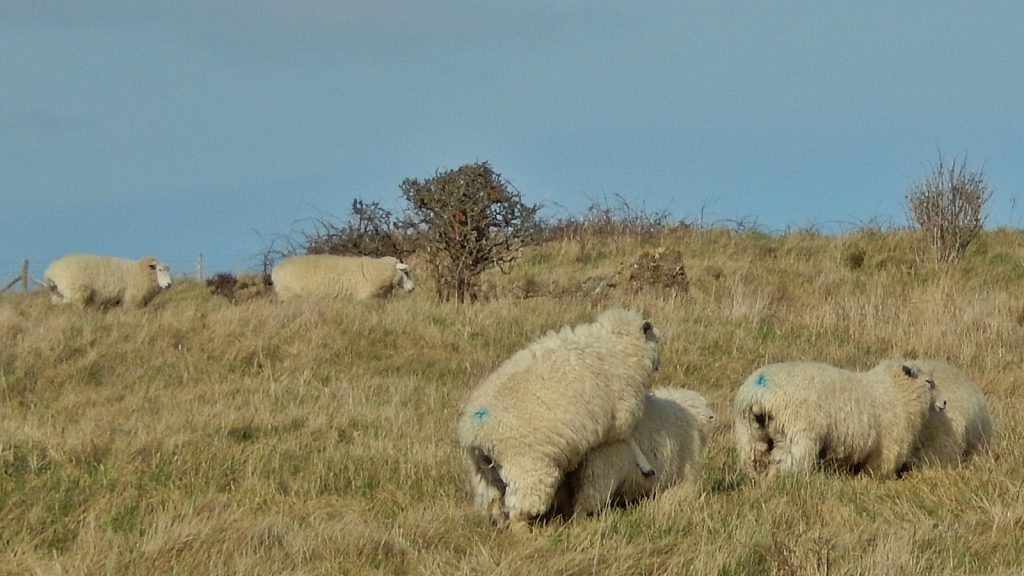 Actually we wanted to have a short peek into Dover Castle afterwards, but entrance fees of 18,-£ (24,-€) per person really scared us away. We just wanted to visit that old masonry, not to buy it. 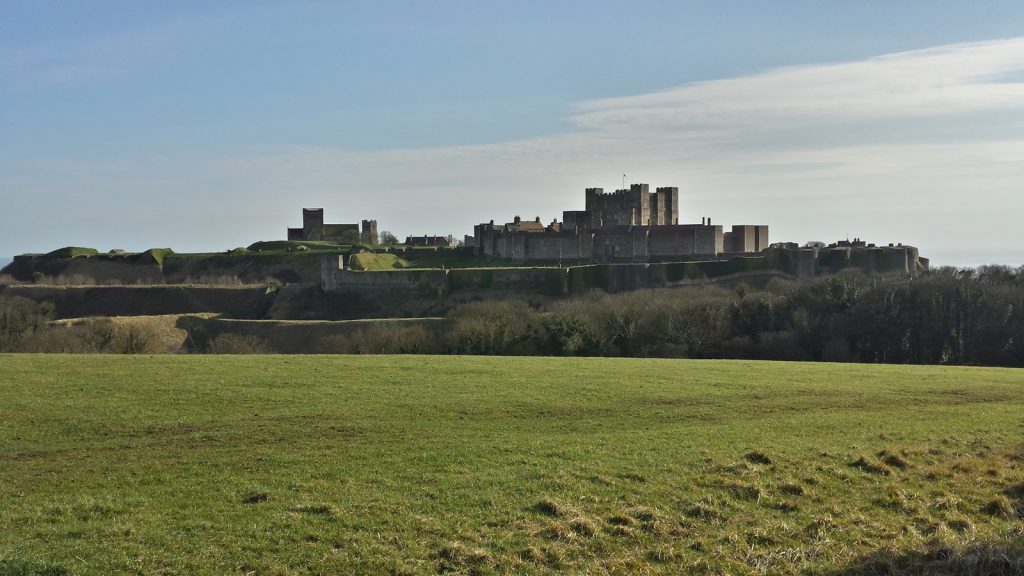 Instead we’re going to Samphire Hoe, an artifically built concrete wall made of excavation material from the channel tunnel. Somehow it reminds us of socialistic structures of eastern Europe. 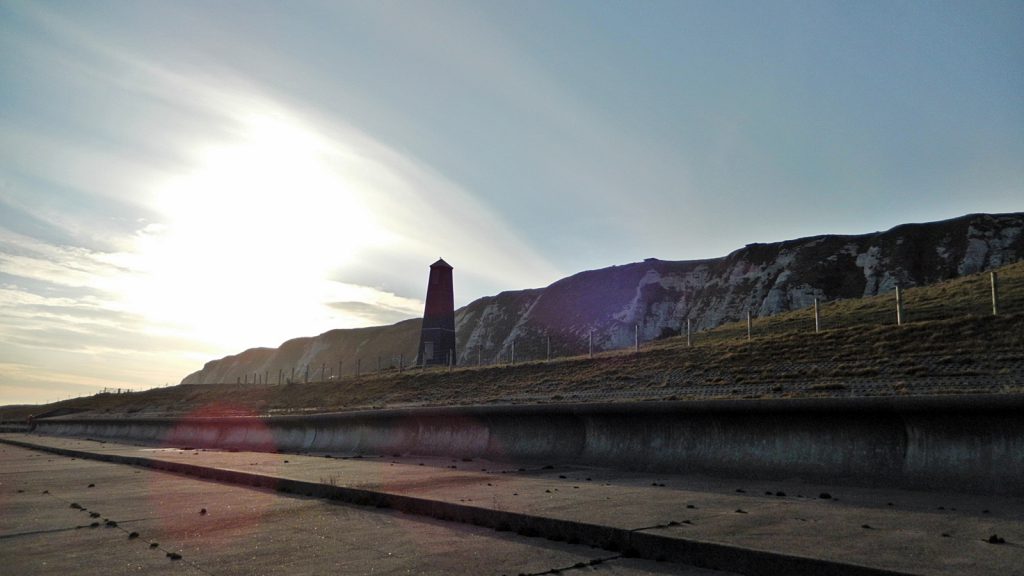 The weather still feels like summer so we decide to have a barbeque for dinner. In a superstore we find a lonesome butchers’ counter where we buy some meat freshly from Scottish highland cattle, with a do-it-yourself marinade. Looks delicious, tastes absolutely great (rarely ever had better meat before), and in the end it turns out to be as expensive as the entrance fee to Dover Castle. Luckily we still have enough water and bread for the rest of our journey. 😉

Well fed we head for a beer to “our” yesterday’s pub again. A very family friendly pub it is, they feature lots of board games for all ages. We become interested in a game called Crazy Camper, where you have to fit tiles with funny camping scenes onto a board just like Tetris. The manual says there were 32 different ways to solve that puzzle, with three persons we do not find a single one within a good hour… 🙁 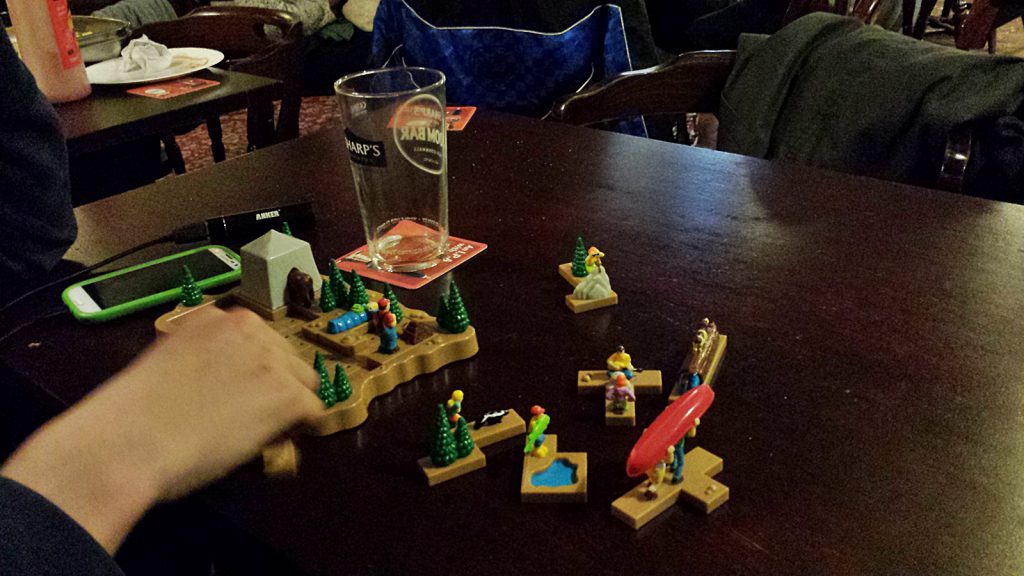 Hamburg Weather on the Way to Nottingham

Today we have to get up early, because our English friend Brandyman has got us tickets for the British second devision football game between Nottingham Forest and Wolverhampton Wanderers, which will start at 16.00. From our campsite to Thorntons’s Holt Camping Park in Nottingham it is about 300 kilometers or nearly five hours by Didimobile.

Hamburg weather in the morning

Dartford crossing again greets us without any traffic jam and until a hundred kilometers short of Nottingham everything goes smoothly. The rest of the M11 motorway near the junction with M1(M) is closed due to road constructions today, so we just leave the motorway shortly before. That was not the best idea as we will soon find out, because we have reached an area where even the google maps satnav does not have a clue where she is, so she directly leads us into a dead end road. When she realizes her mistake, she tries to send us either left or right within the next 50 to 100 meters on and on without any roads or even the slightest hints of any paths existing besides the road.

At 15.00 we check in at the campsite. The Didimobile is only parked on the allocated pitch and connected to electricity and off we go to the busstop where we do not have to wait long for the next bus to the city. Just in time for the football match we meet up with Brandyman and get our ticktes. We have got seats in one of the rebellious supporter blocks so we are able to stand for most of the game although standing in British football stadiums is normally not allowed at all. 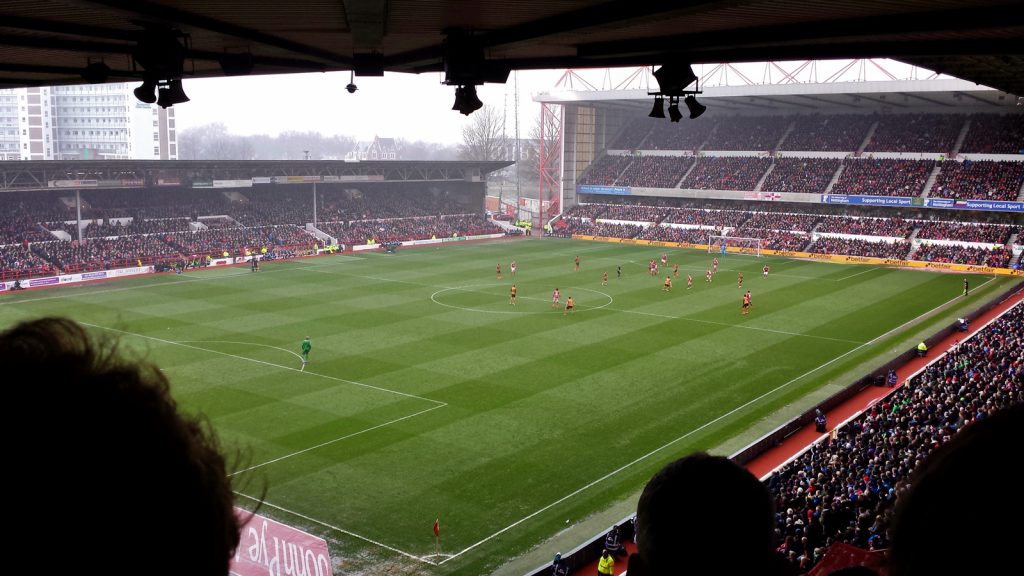 Sold out stadium at Nottingham Forest

After the game we immediately go back to the campsite to freshen up and change our clothes from football to icehockey. At 7pm our English friend from Clifton comes round and helps us to prepare nearly 10 liters of Spicy Tomato, better known to Hamburg people as “Mexikaner”. Actually British people do not like Spicy Tomato at all, but they seem to find it that disgusting, that they nevertheless drink it in masses and find it absolutely great. Strange people. 😉

Spicy Tomato is an alcoholic shot drink originating from Hamburg, Germany, where it is called Mexikaner (Mexican). The main ingredients are korn (the German equivalent to Vodka), tomato juice, Sangrita (a spiced mexican vegetable juice), Tabasco and some salt and pepper, but there are many variations of this receipe. While originally there was no ready made Spicy Tomato, today some companies try to sell them in bottles in some supermarkets, but those ready made Mexikaner do not taste nearly as good as a self-made one. 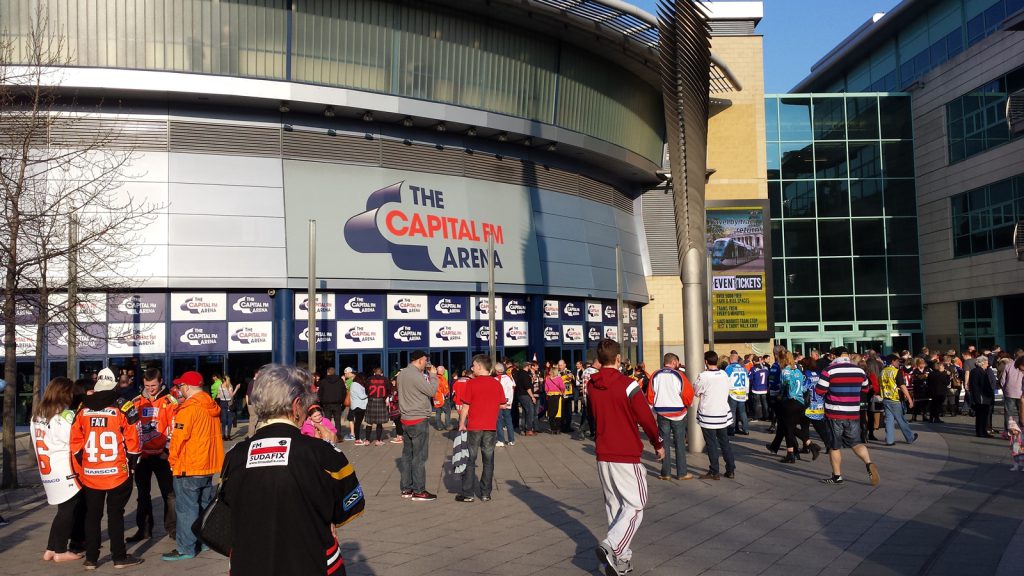 Once in town we are heading from pub to pub to give several people their ordered German Schnaps until we finally reach “our” pub directly next to the arena, the Castle Inn (today The Nottingham Legend) which the Spicy Tomato is assigned for. Here we also meet the other four fans from Hamburg and an illustrious party people full of icehockey fans from all over Great Britain.

Preparing for the games 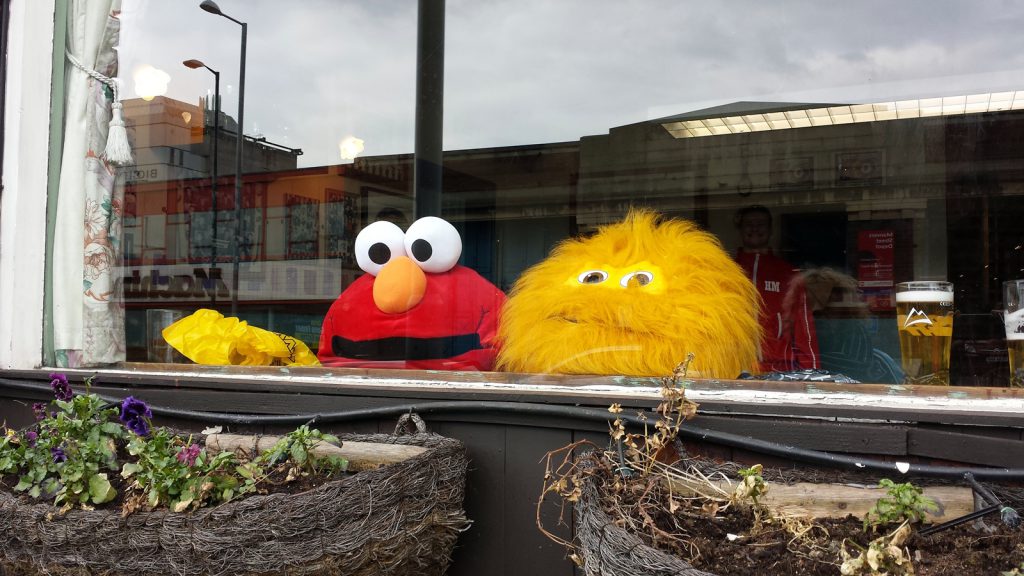 This Saturday is completely dedicated to hockey. Unfortunately, our friends’ team, the Nottingham Panthers, have not made it to the playoffs, so during the two semi final games many things inside the arena are somehow more interesting than the games themselves. But fans from six of ten teams have the same problem, since their teams have not qualified either but tickets for the playoffs had to be bought long time before. 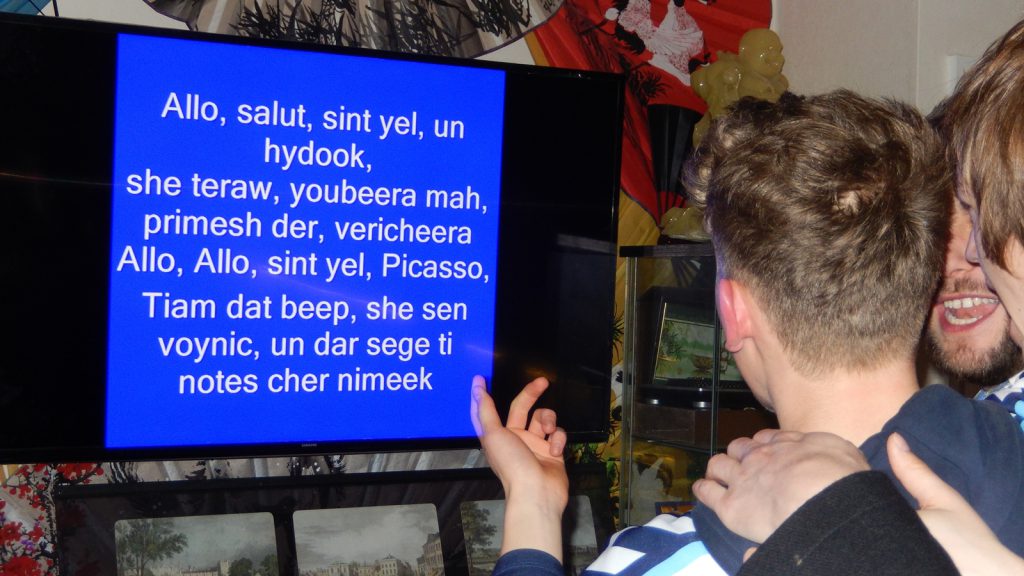 Karaoke. Only singable and readable after several pints. 😉

The evening is just a big great party and ends up in a karaoke bar in the middle of the night. English people are not ashamed of nothing. 😉

Today the game for the third place and the final game in the British hockey playoffs take place. During the first game the arena is not even half full, most of the British hockey fans seem still to have some kind of hangover. For the finals in the afternoon the arena is full again, but since both teams playing do not belong to the most popular ones on the island, Mexican waves and inflatable airplanes become the real highlight during large parts of the game. 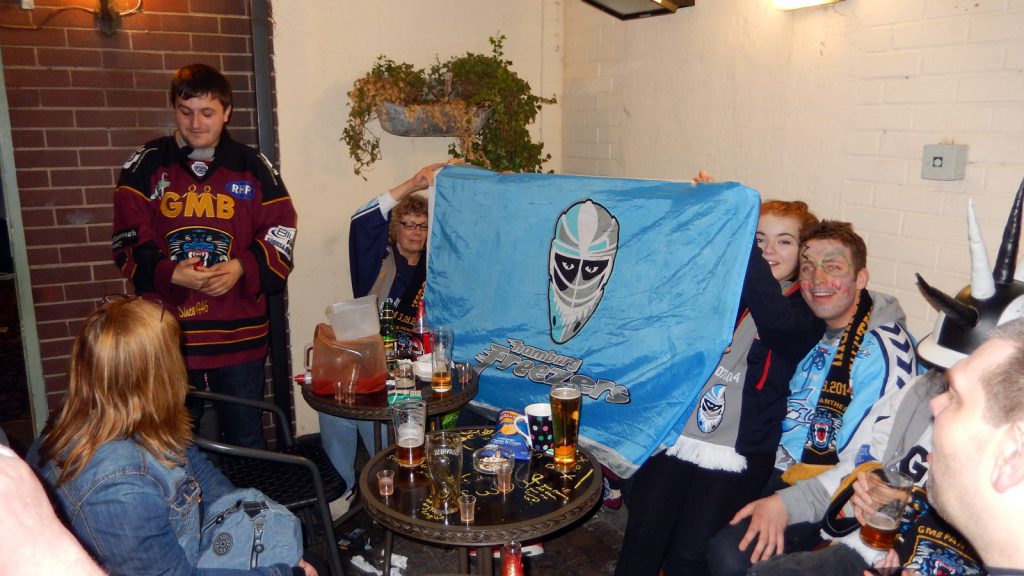 In the evening everyone gathers at the pub and afterwards at Chinese karaoke again. Thank god the weekend will be over soon. 😉