To be on the road in a T25 Volkswagen bus means freedom, but also very limited space for everyday stuff like foods. The Didimobile has got a big box which once hosted a camping toilet. Didi was not really amused about having it on board since it would have been possible to sit on the loo and cook a meal at the same time. And anyway, a bit of luxury is needed even on a Didimobile roadtrip, and that is why we normally pull up at camper sites and/or campsites with electric hookup and sanitary facilities. This makes the need of having a portable toilet on board secondary and creates significant extra storage space.

Since the Didimobile’s first tour, the “loo box” has been filled with beverage supplies, mainly boxes of Fritz Kola, a local brand of Coke. But can there even be anything better after a long and exciting day on the road than to finish it off with a nice beer in the evening? Mostly, however, there is only a rather small supply of beer on board the Didimobile, so the local barley brew is frequently tested for its thirst quencher characteristics.

Following here is a small choice of beers which are somehow linked to the Didimobile since its takeover by Didi in 2014, being completely subjective and without any claim of completeness. 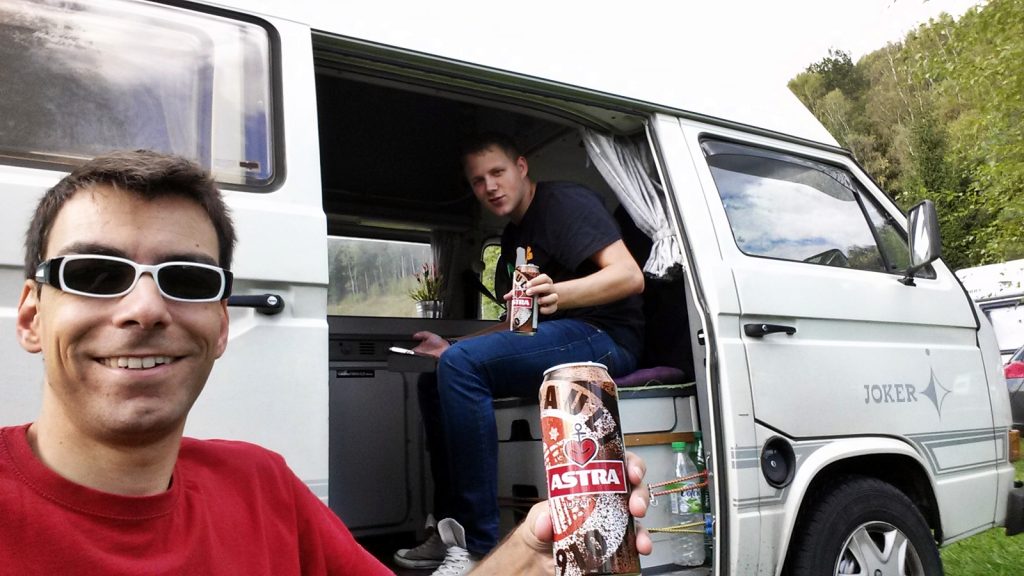 The one and only local Hamburg Pils.
Hamburg, the harbour, Sankt Pauli: The beer with the anchor-heart is strongly linked to our home town. It looks fantastic in its bulbous bottle and must not be missing at the beginning of any journey. In Albania it served as a gift and as a means of payment for an exhaust fume repair. When going to England there has always been at least one order for a box of Astra beer. Actually there is hardly anything that it can not do. An ASTRA tap shield has been hanging over the Didimobile’s inside mirror for some time now.

Located in Frankonian Switzerland, situated between Bamberg, Bayreuth and Nuremberg, is the region with the world’s highest density of breweries. One of these breweries is Brauerei Reichold in Hochstahl near Aufseß. Apart from the brewery itself, where they not only brew classical Lager but also Zwick’l (cellar beer) and Hefe-Weizen (wheat beer), the Reichold family also runs a small inn with guest rooms, a pub and a brilliant camper site. Since our first Didimobile tour in 2014 to Therme Erding Spa where we stayed there for a night, Brauereigasthof Reichold has become a frequent port of call for travels towards the south. My favorite beer: The Zwick’l, an amber-coloured, unfiltered cellar beer.

Erdinger Weißbier (Erding wheat beer) has also got a very special meaning for the Didimobile: The first tour brought the Didimobile to Therme Erding Spa in 2014, and what could have been more fitting than to finish the evening off with traditional Bavarian cuisine and a local wheat beer?

Interestingly the weather had never been the best: Once it was pouring cats and dogs, once it was bitterly cold and windy. The following day we have always spent inside the spa so far.  On the morning of departure we traditionally went again for a Weißwurstfrühstück (traditional Bavarian white sausage breakfast) to Erdinger Weißbräu, including a tasty wheat beer (of course non-alcoholic for Didi, the driver). And every time it was possible to sit outside in the Biergarten with summer temperatures and bright sunshine. 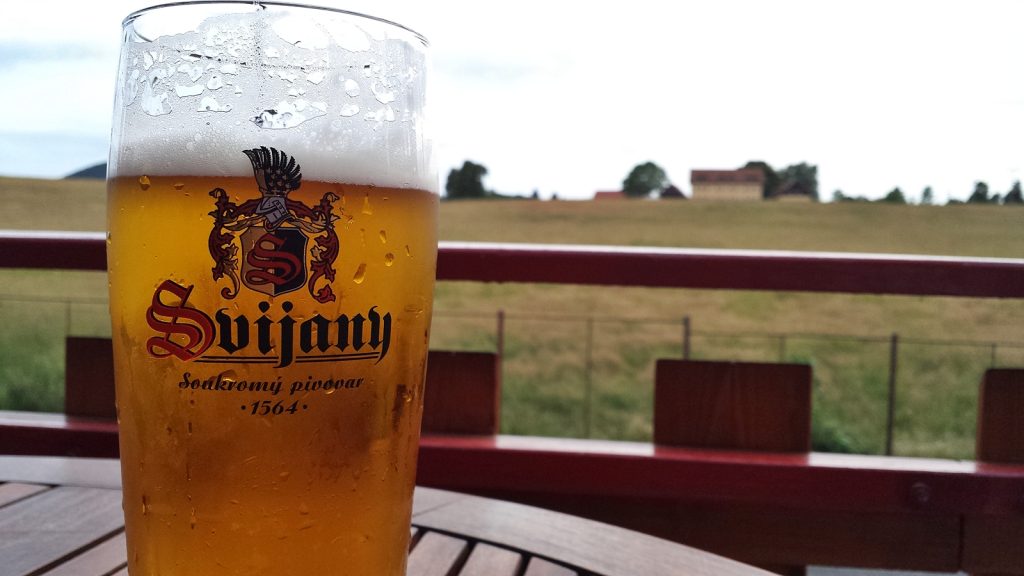 On the Grand Tour Around Germany in 2015, the Didimobile was in Czech Republic, the land of beer, for the first time. Finally having arrived at the campsite in Vysoká Lípa in Bohemian Switzerland, Didi and the “son” had their first ever shared beer together, a pint of Svijany for 70 cents. A very tasty Pils, which – for me – will stay something special forever, keeping the memory of the “volcano” (a cone-shaped mountain on the horizon) alive. 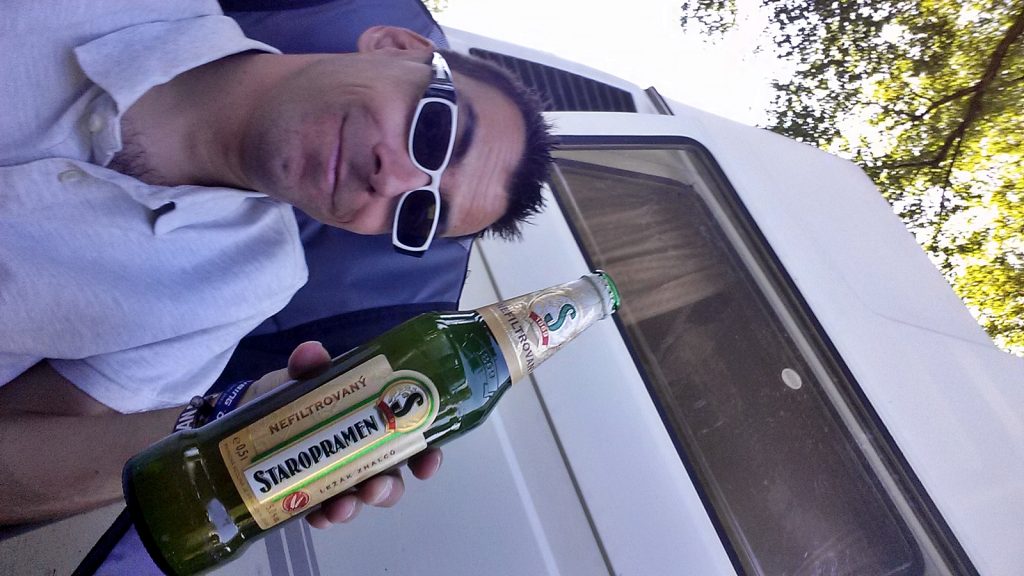 Staropramen, the one and only Czech beer apart from Pilsner Urquell, is a common sight in Germany as well. After Junior had developed a taste for fine beers 2015 in Czech Republic, we stocked up our beer supplies in a supermarket south of Prague. Apart from the normal Staropramen they had a nearly unknown, unfiltered beer on display, Staropramen Nefiltrovaný. 20 cent for a pint. We were suspicious and only bought four bottles, two for each. Three days later we dared to test the splendidly refreshing beer for the first time and were immediately impressed by its slightly fruity taste. One of the best beers we have ever tasted. ♥
During the Short Trip to Czech Republic in summer 2017 two boxes of this beer were immediately bought and brought along home. One for myself and one for the “Offspring Gourmet”. 😉 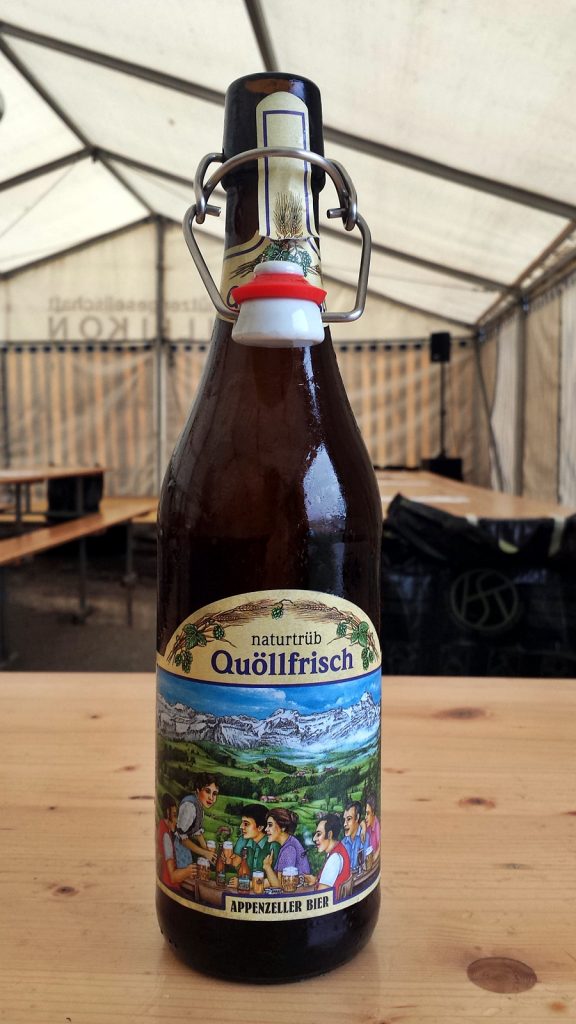 Does Switzerland go along with beer? When thinking of Switzerland it used to be things like delicious chocolate, holes with some cheese around it or completely overpriced watches which came to our minds, but we would not have thought of beer at all. Well, they have Feldschlösschen, which is quite drinkable. But at the  VW bus convention in Zwilikon near Zurich in 2015, Junior and I experienced a beer with the somewhat strange name of Quöllfrisch, which people said to be a local Zurich speciality. The proof of the pudding is in the eating, and we immediately were convinced by the unfiltered Appenzeller (a Swiss region’s name) beer. Unfortunately it is quite unlikely to find it anywhere outside Switzerland since the brewery is still a traditional Swiss family run business not being bought yet by any global player, and this can definitely be tasted. ♥ 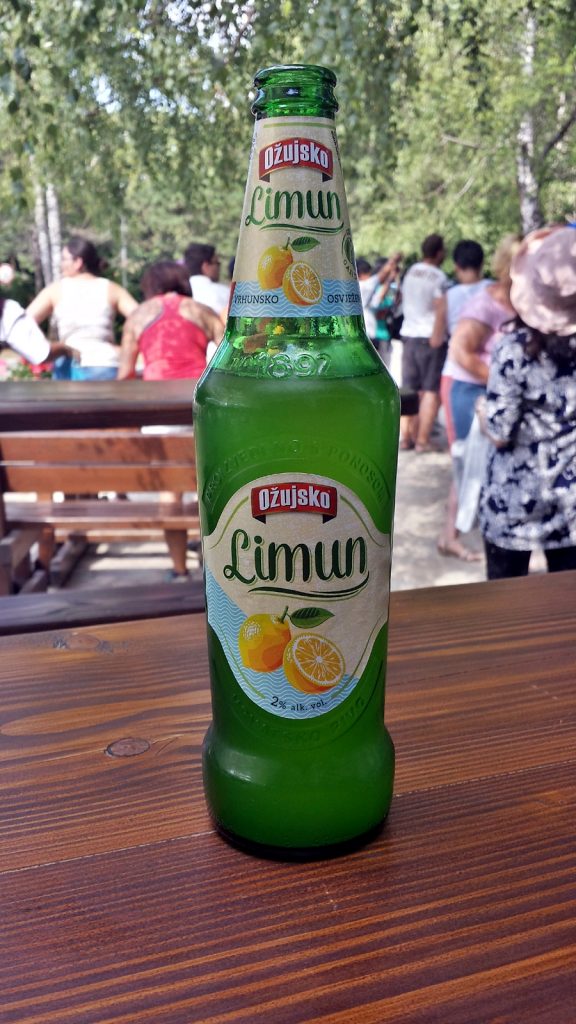 In Croatia people drink wine or Sliwowitz, but are they also able to brew beer? An initial attempt with a brew named Karlovačko confirmed the prejudice. It was watery, tastless and boring. Just the right thing for people who don’t like beer at all. Therefore I was positively surprised when I indulged myself in an unfiltered lemon beer at a kiosk while waiting for the bus shuttle after an exhausting day at Plitvice Lakes National Park with temperatures in the high twenties. I was expecting some kind of ready mixed shandy. Ožujsko Limun only has got 2% alcohol but nevertheless tastes quite fruity-fresh and all but artificial. Especially in summer it is recommendable as a refreshment once you don’t have to drive a car afterwards, and I even would prefer it over an also unfiltred Gösser Radler.

For many years Croatia had been part of former Yugoslavia as had been Bosnia and Herzegovina, thus I had already lowered my ambitions when I ordered a local beer at Jajce campsite on my Roadtrip to The Balkans in 2016. The noble drop is named Sarajevsko and tastes unexpectedly good, quite as if the Bosnians had learned how to brew beer in Czech Republic. A surprisingly delicious beer. 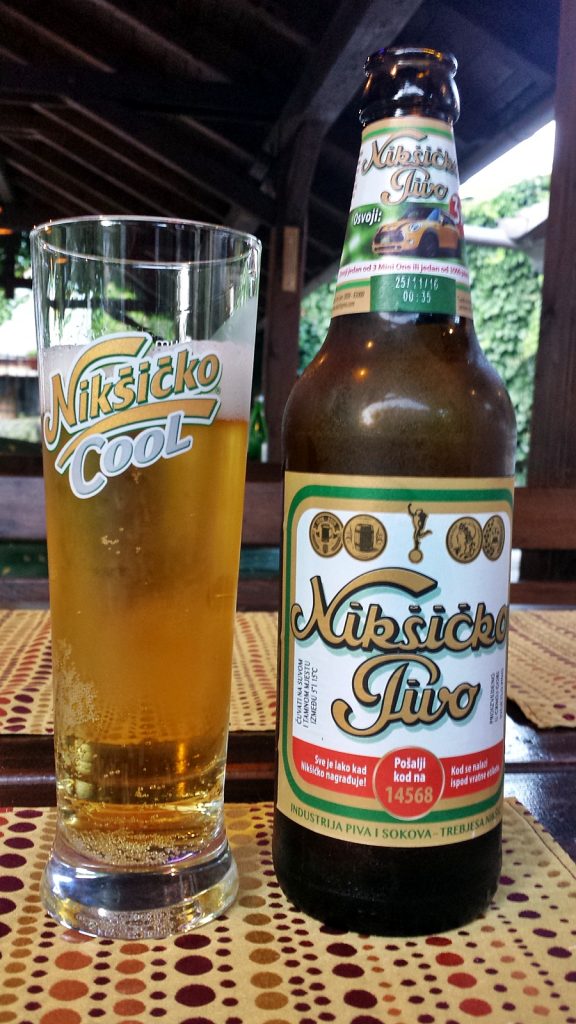 Another quite enjoyable beer is the Montenegrin Nikšićko pivo. It is nothing special, but a standard beer which can keep up with the common taste of our local beers. That certain something is still missing which would distinguish it from other beers, but that might be due to its parent company belonging to the world’s seventh largest brewing company, Molson Cors, since 2012. 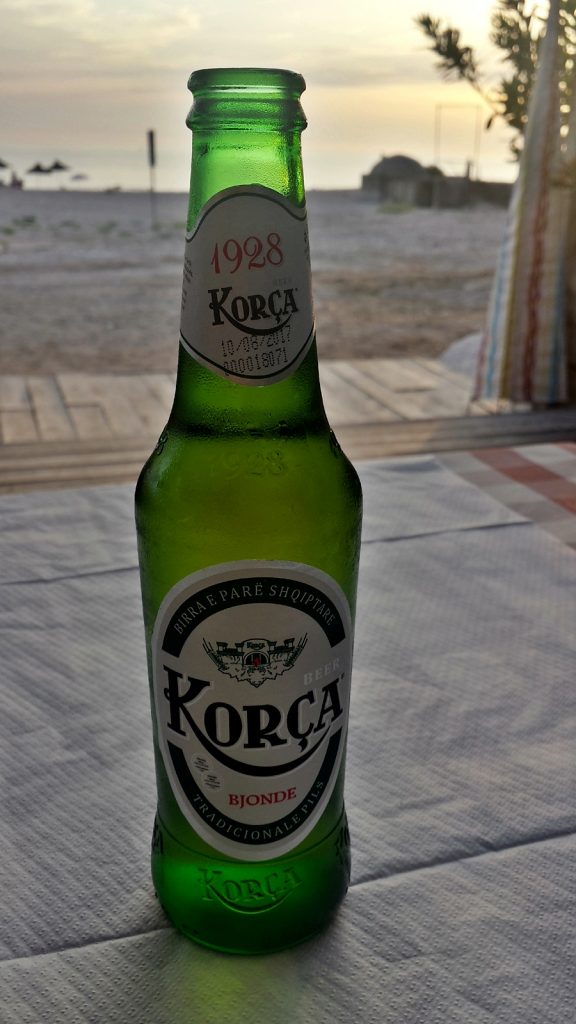 Yes, they even had beer during Communism. The still independent Albanian brewery Birra Korça was founded in 1928 by Italians and has survived the rise and fall of communism. Today they brew a refreshing and delicious beer with the help of Czech and Italian technology. Roughly 1.30€ are due for a pint in a restaurant in Albania for the country’s most favourite beer, hence prices being similar to Czech Republic. 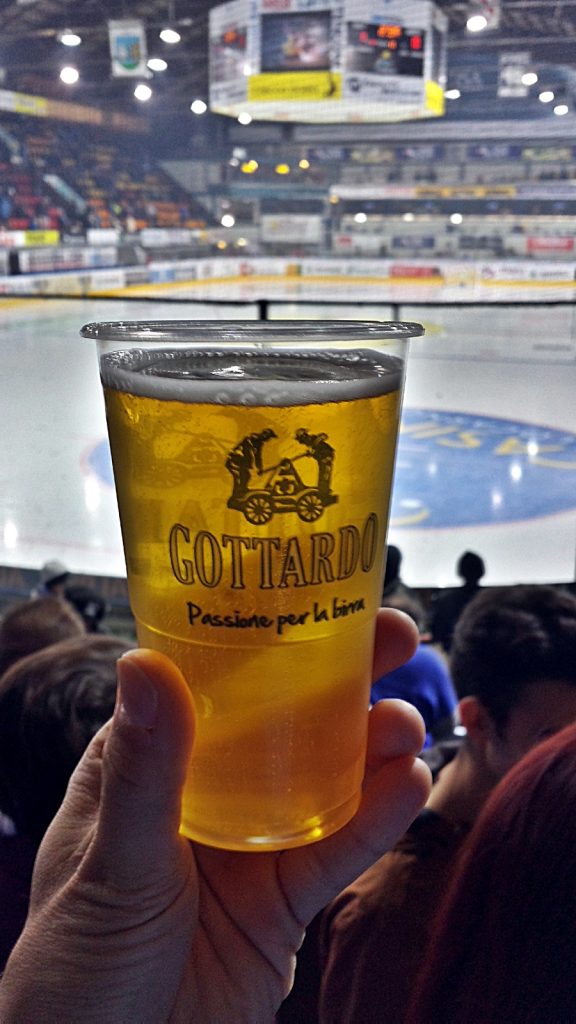 No way can the Swiss not brew beer! Ok, Birra Gottardo is indeed a quite tasty beer, but not implicitly a really special one if it weren’t for quite many other issues actually making it special. First of all it is the home beer of the Swiss hockey club HC Ambri-Piotta which leads to an absolutely positive connotation. Secondly it is still a small local brewery which has not been associated with any large corporation. And last but not least this beer has got the most adorable corporate logo of all beers around the world (apart from the Astra heart-anchor, of course ^^): A draisine handcar. ♥
Junior and I would love to call one of the hockey club staff’s sweatshirts featuring the handcar ours… 😉 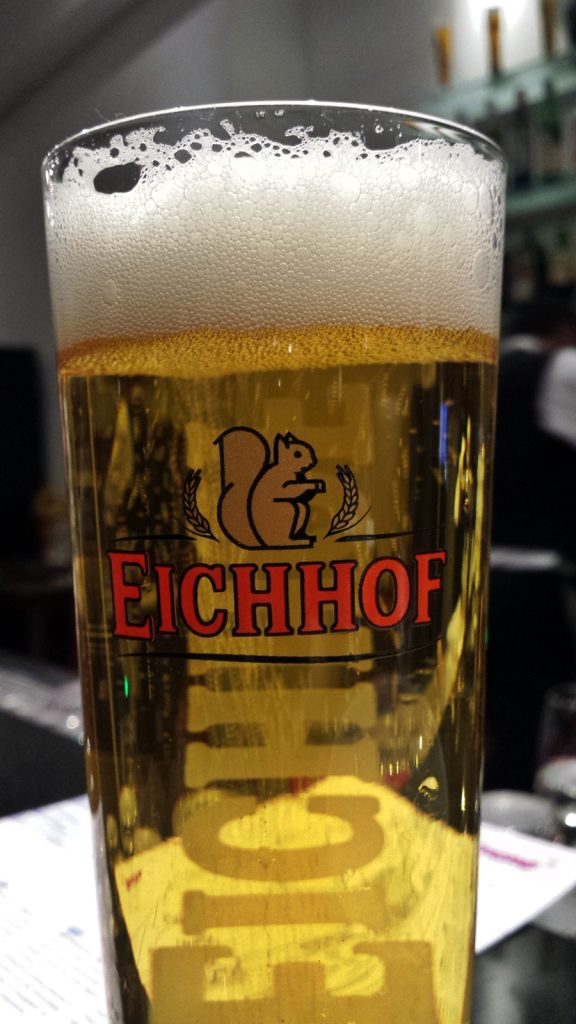 Another Swiss beer. The small Confederation seems to be busier in brewing beer contrary to popular opinion. And they are kind of creative. Have we just had a handcar as a logo, this beer brewery’s logo features a squirrel. Really, Eichhof beer is nothing special: Definitely drinkable, tastes like beer, but IT FEATURES A SQUIRREL. And that is so cuuute… 😉 ♥ 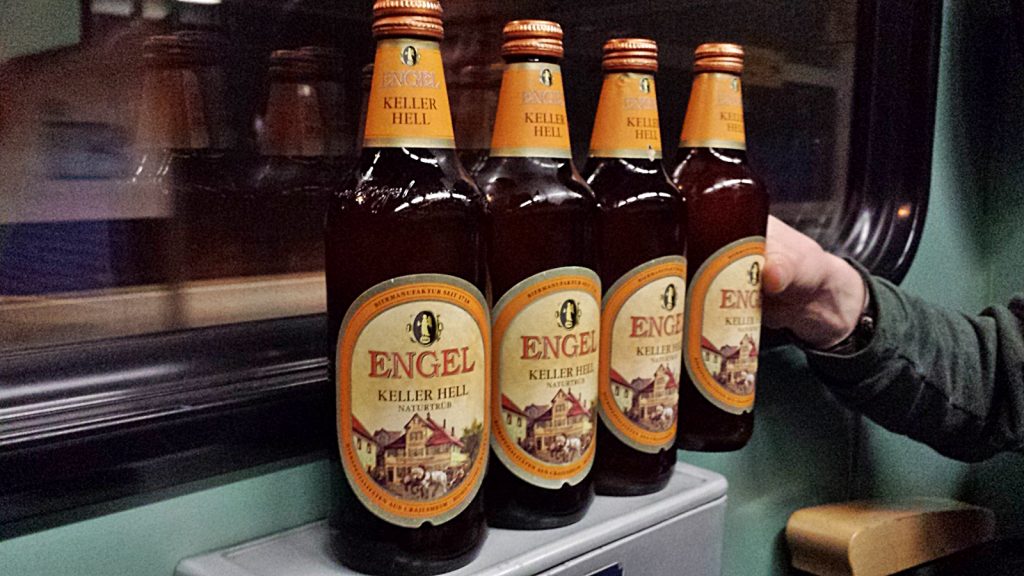 This is a beer which is only indirectly linked to the Didimobile but should nevertheless be mentioned. During a football away trip in autumn 2016, the “son’s” task was to fetch us a beer at an intermediate railway station in Crailsheim, and he returned with four undefinable bottles of Engel Keller Hell naturtrüb (unfiltred). It was the best brew in the region, the clerk had talked him into. Doubtfully we took a gulp and had to agree: A really very delicious beer, the clerk had a fine taste. We would directly compare it with Staropramen Nefiltrovaný and Quöllfrisch naturtrüb, which makes it one of our favorite beers (apart from Astra ♥ ).
During our Autumn Roadtrip in 2017 we actually wanted to fetch some more, but due to a minor time issue it unfortunately did not work out. Thus a detour to Crailsheim railway station has already been put on a to-do-list. 🙂