Today we are going to visit the Technik Museum Speyer. The museum features exhibitions of many old automobiles, trains, ships and aircrafts. The main attraction is a real Boeing 747 airplane from Lufthansa which can even be explored from the inside. 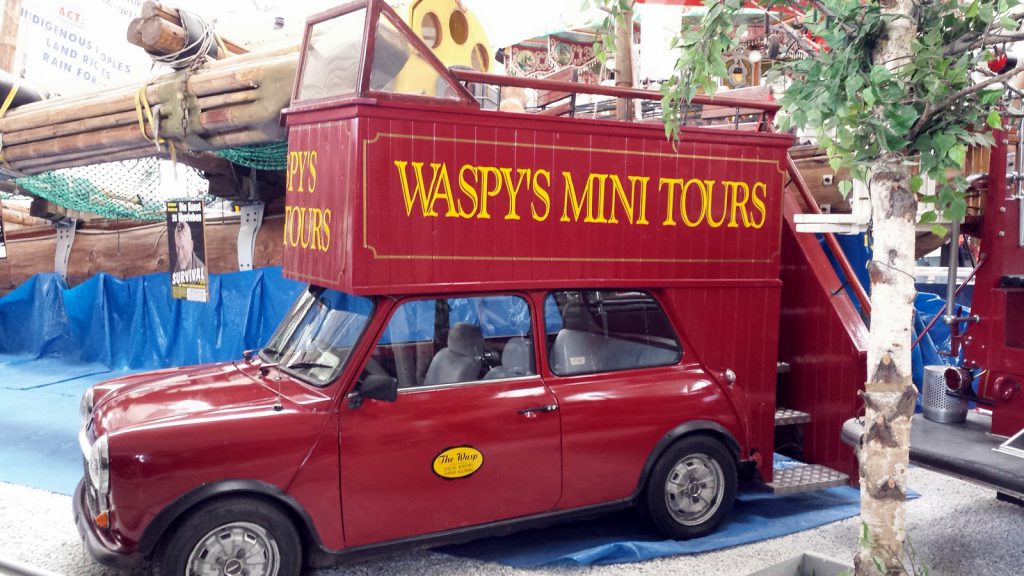 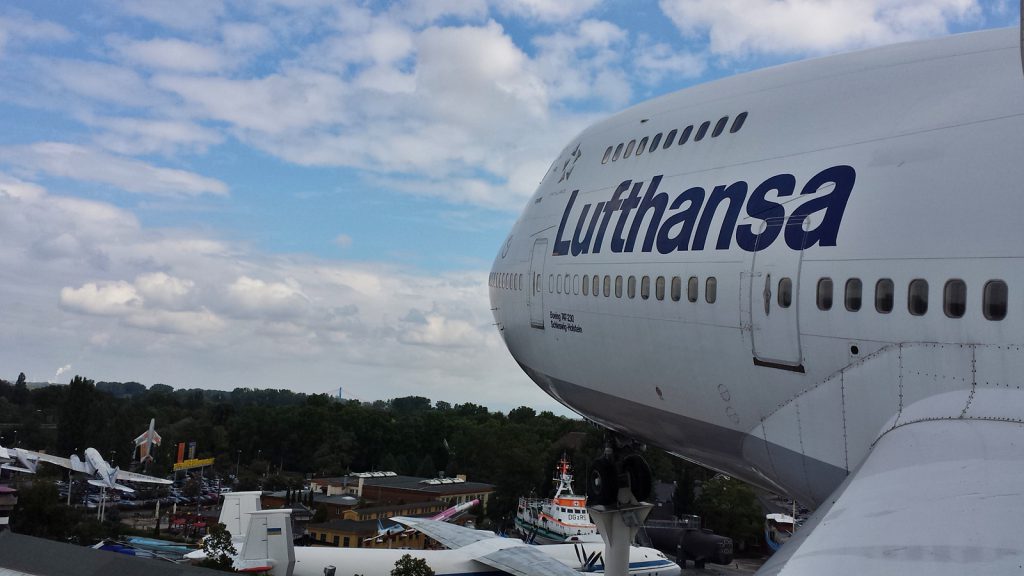 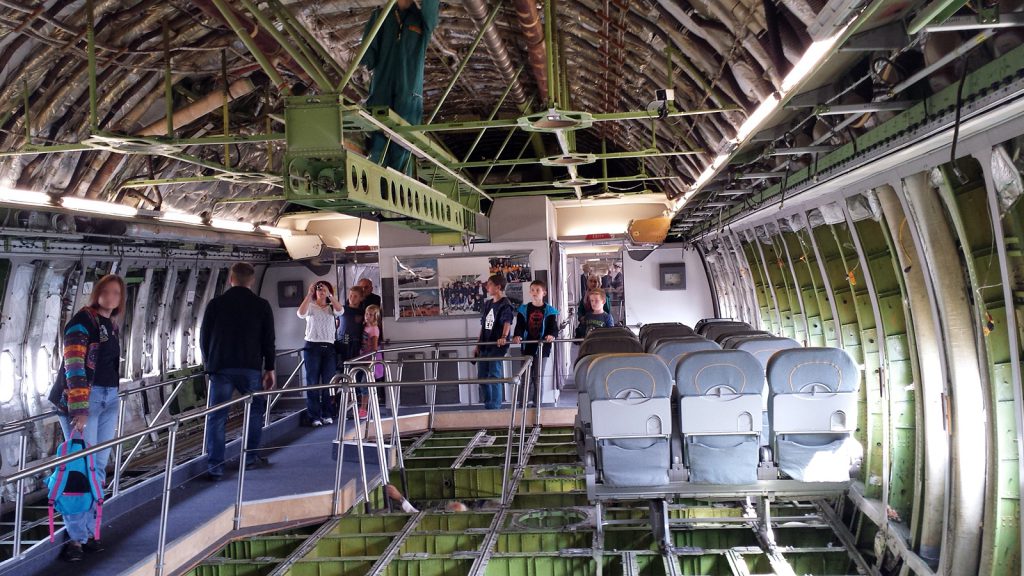 When you take out the seats… 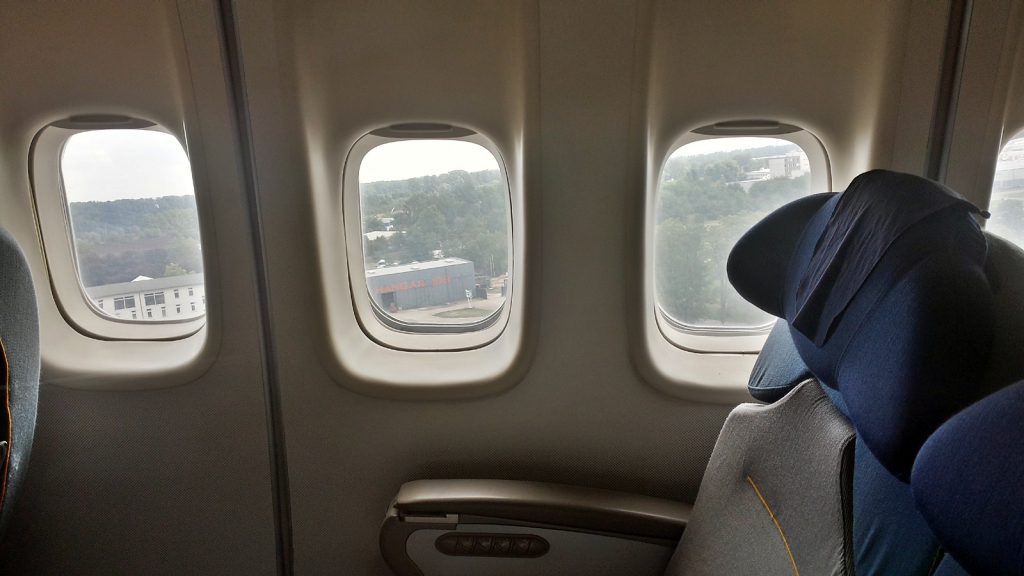 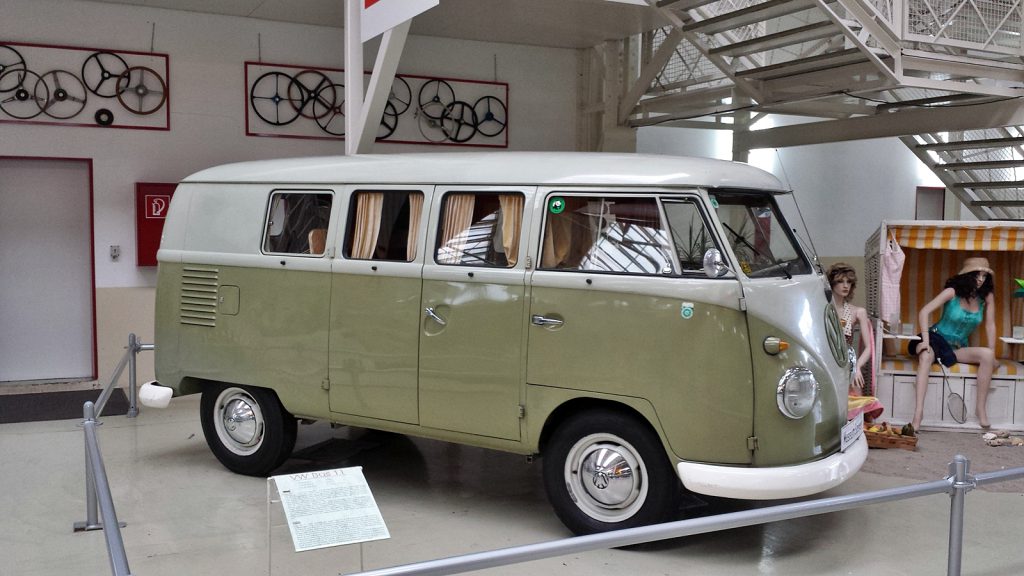 Back in Heidelberg we freshen up ourselves quickly, because we have reserved a table at Heidelberger Schnitzelhaus for 8pm. Here they offer more than 100 variations of Schnitzel (and nothing else), very recommendable. 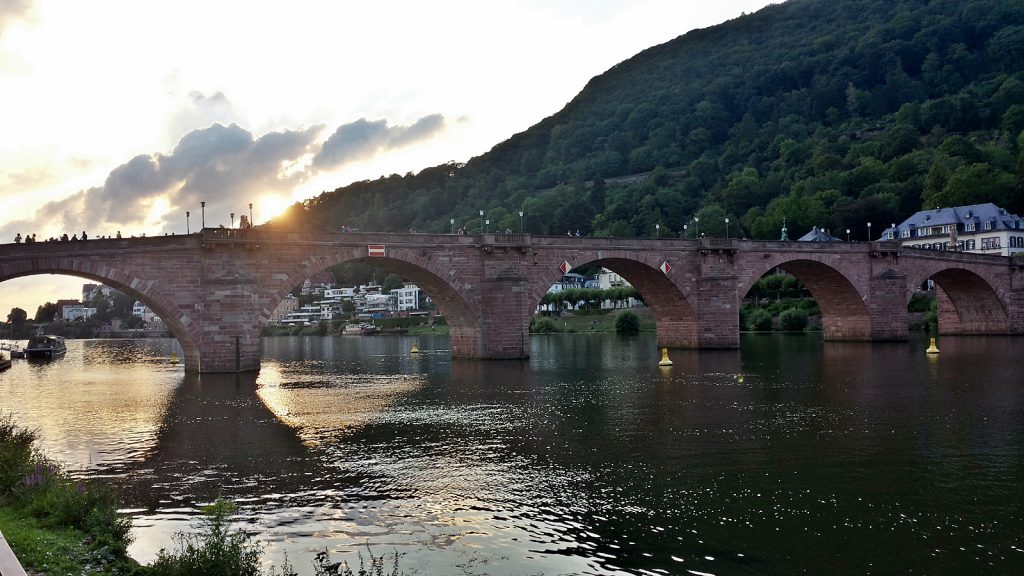 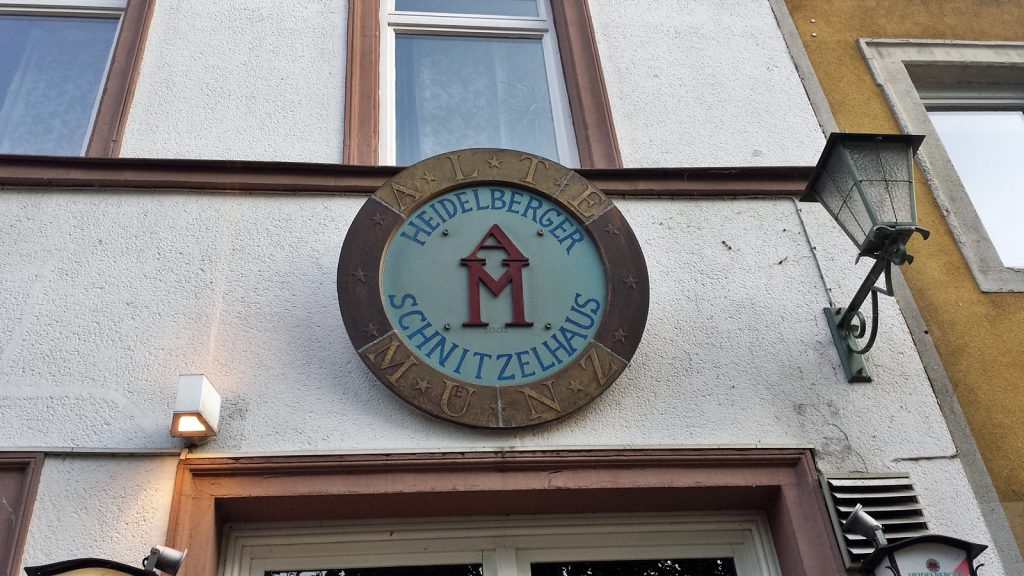 Together with our friends from Heidelberg we order four different Schnitzel, one with mushroom sauce (Jägerschnitzel, “hunter’s schnitzel”), one with pear in red wine sauce, one with chocolate sauce and one with raspberry sauce. And what shall I say? They all taste more than delicious. 🙂 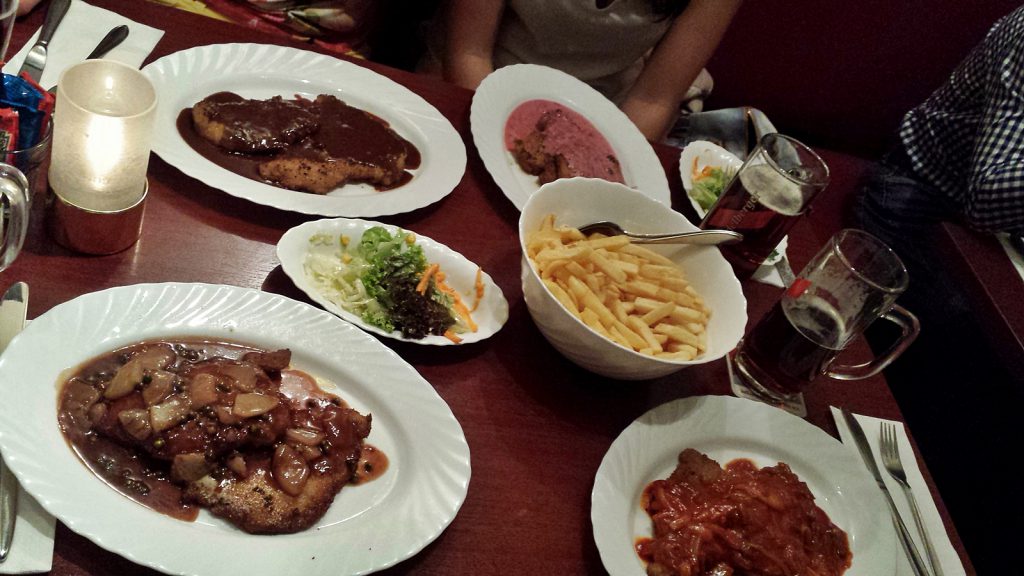 Clockwise from back left: Chocolate, raspberry, mushroom and red-wine/pear.

Fed up we fall to bed. Originally, tomorrow we would start our trip back home, but since everyone knows us there we we are simply spontaneous people, that won’t work out for us.

Off to the Netherlands

As already signalled we have slightly changed our plans. Friends of us from Nottingham have been in Hamburg for a visit last weekend and have unfortunately missed us, because we have obviously been in Switzerland. However, both of them travelled on to Amsterdam, so we are planning on surprising them there. Amsterdam virtually lies on our route, doesn’t it? 😉

The Didimobile needs about eight hours for the 500 kilometres on the Autobahn, which means that we will head directly towards the North Sea without any sightseeing. Only at Garzweiler Surface Mine we have a short break and marvel at the enormous machines of the open pit. 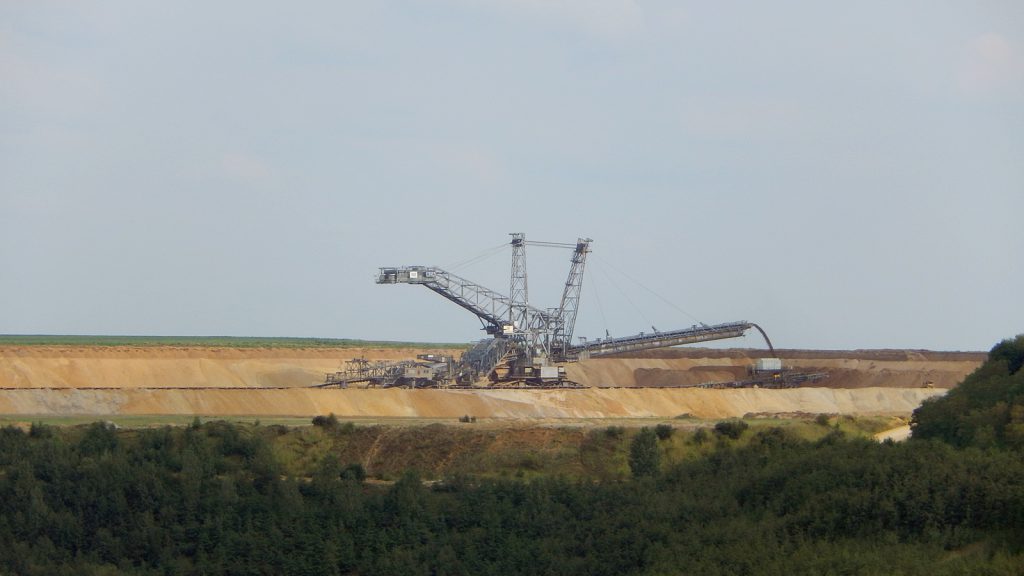 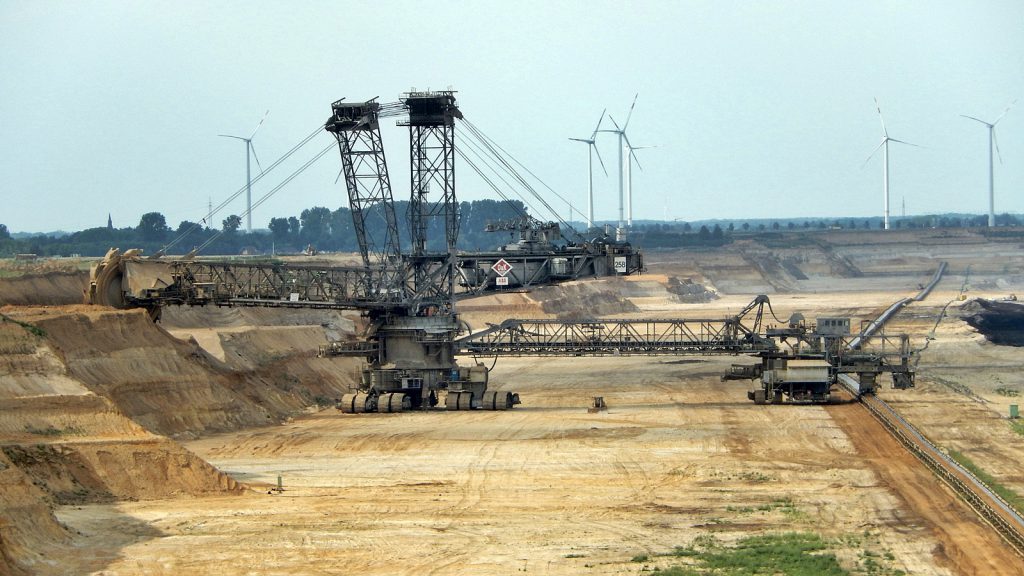 Another excavator. Note the size of the caterpillar.

The drive through the Netherlands is monotonous as usual and so we reach the small camperstop in a suburb of Amsterdam at Almere marina. 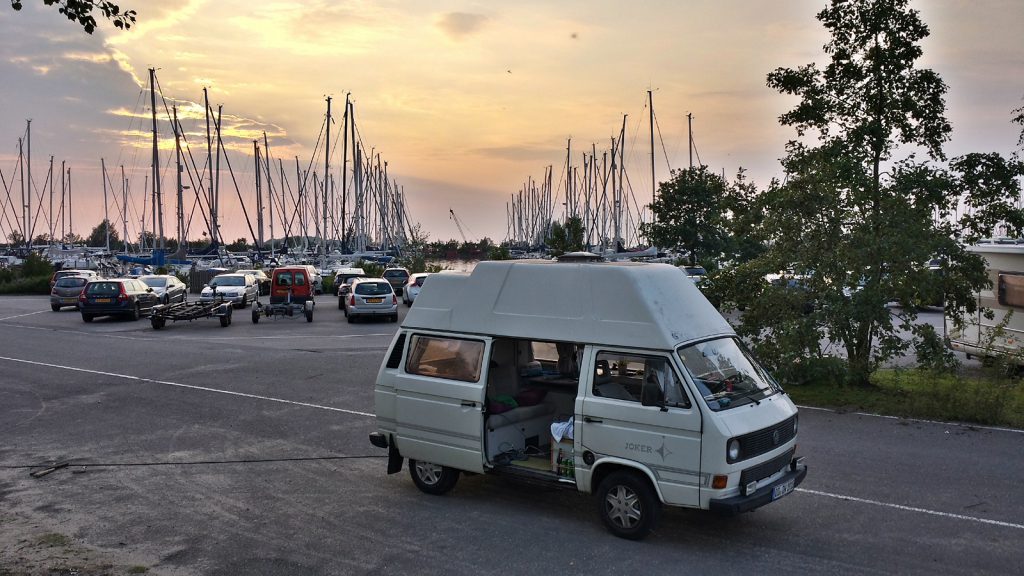 We treat ourselves to a luxury dinner at the local yacht club and are happily looking forward to our surprise visit tomorrow. 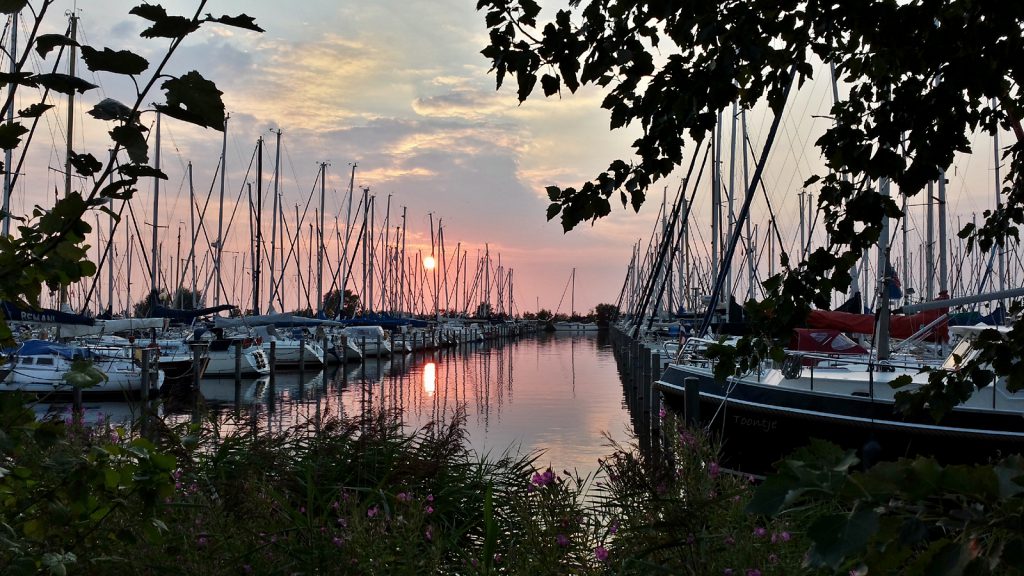 Sunny and bright weather awaits us in Amsterdam today. After a short stroll through the city our “contact person” finds out that our friends are sitting in a café and are having breakfast. Some minutes later our surprise was a full success. Together we spend a great day in this beautiful city which is dominated by hoards of tourists standing in the way wherever possible and unscrupulous and reckless cyclists. 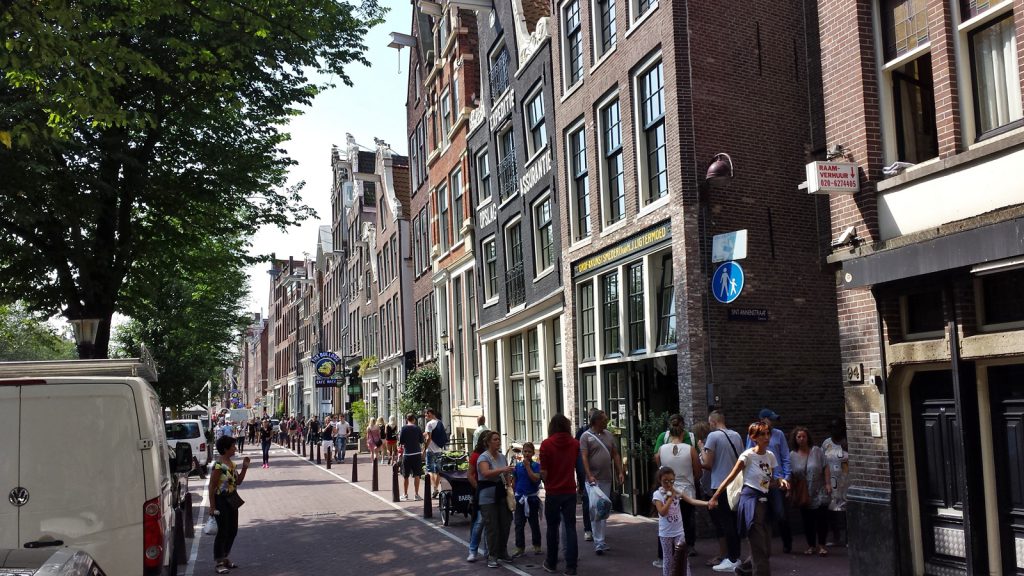 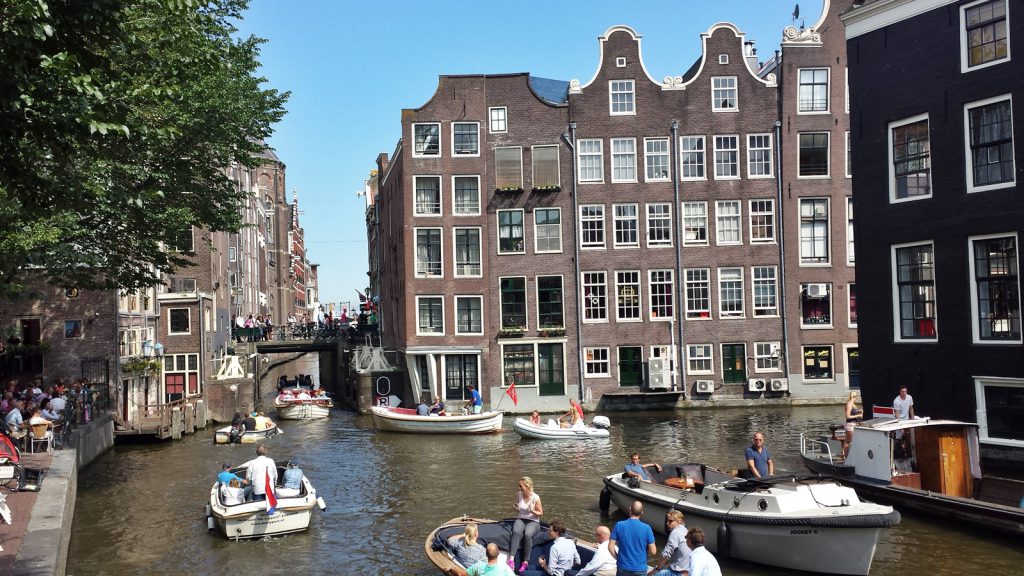 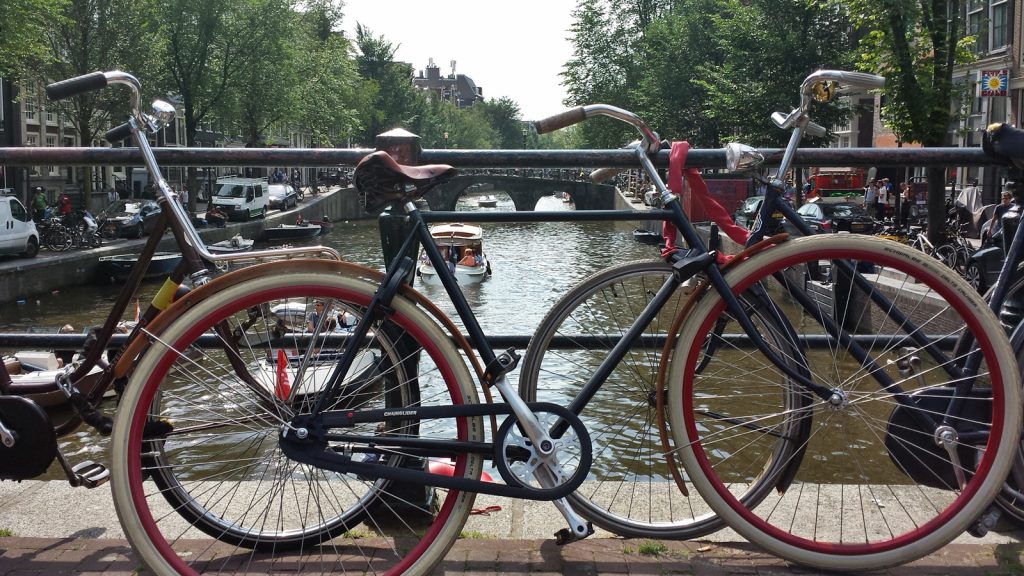 Clearly too many: Bicycles 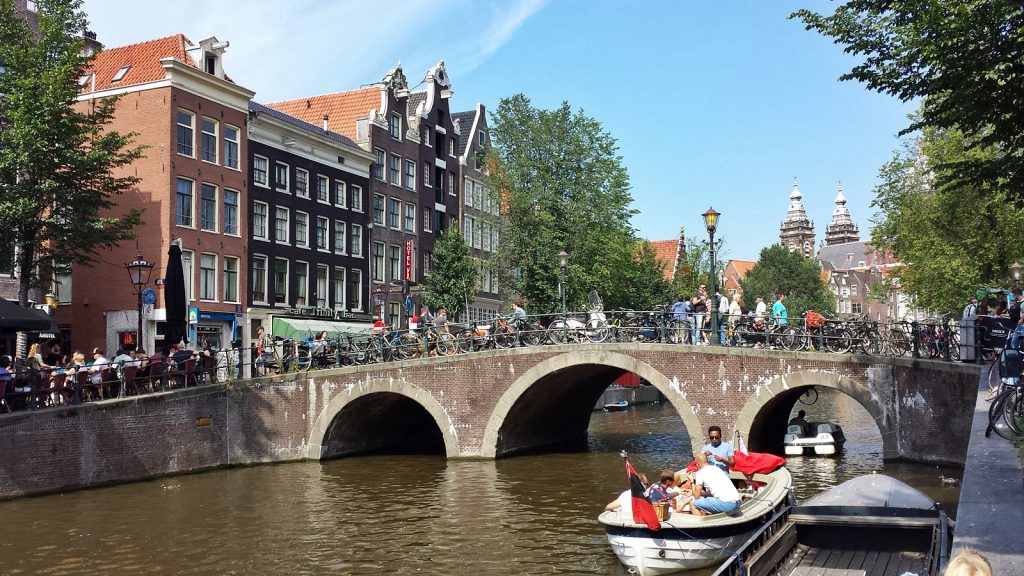 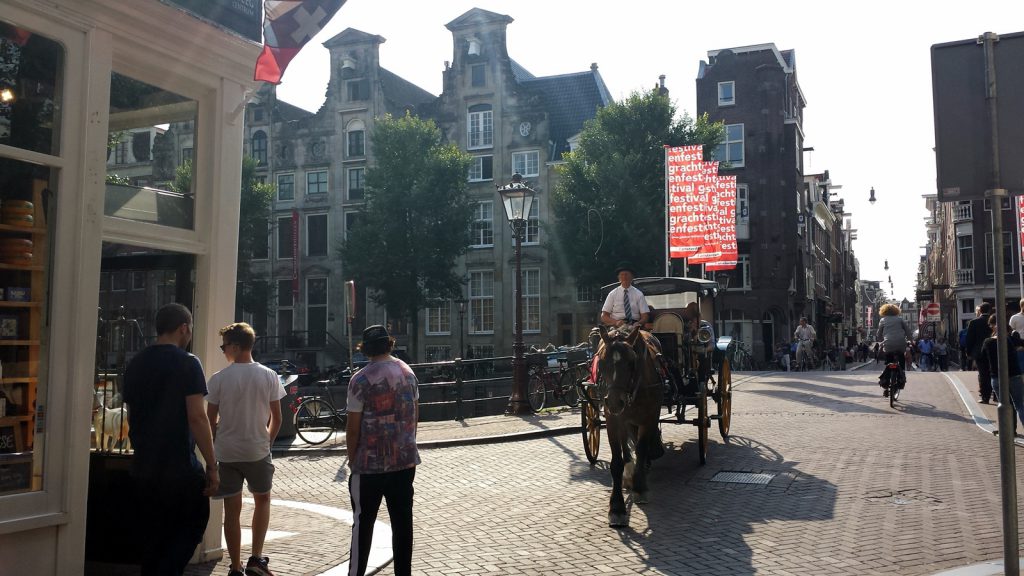 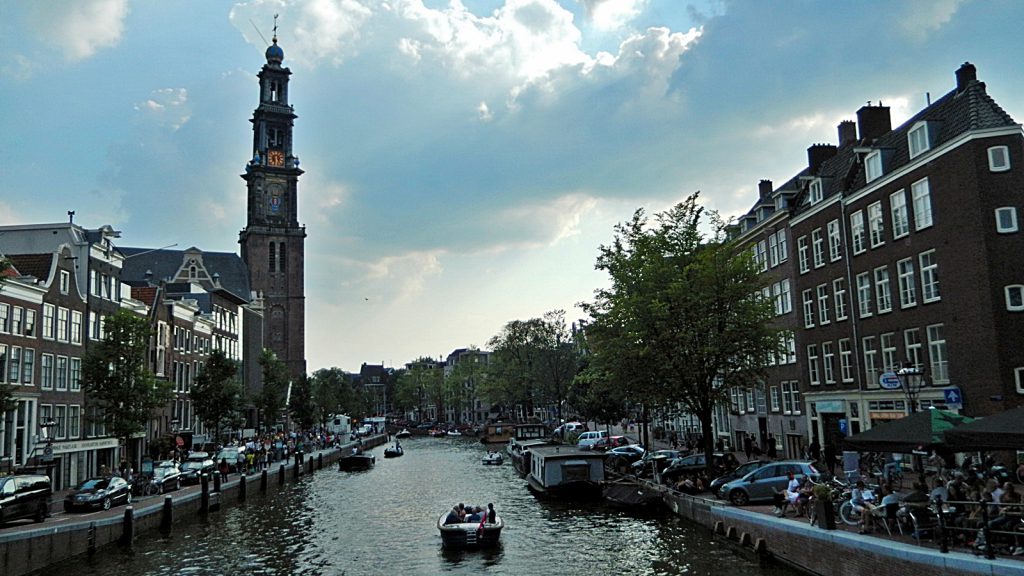 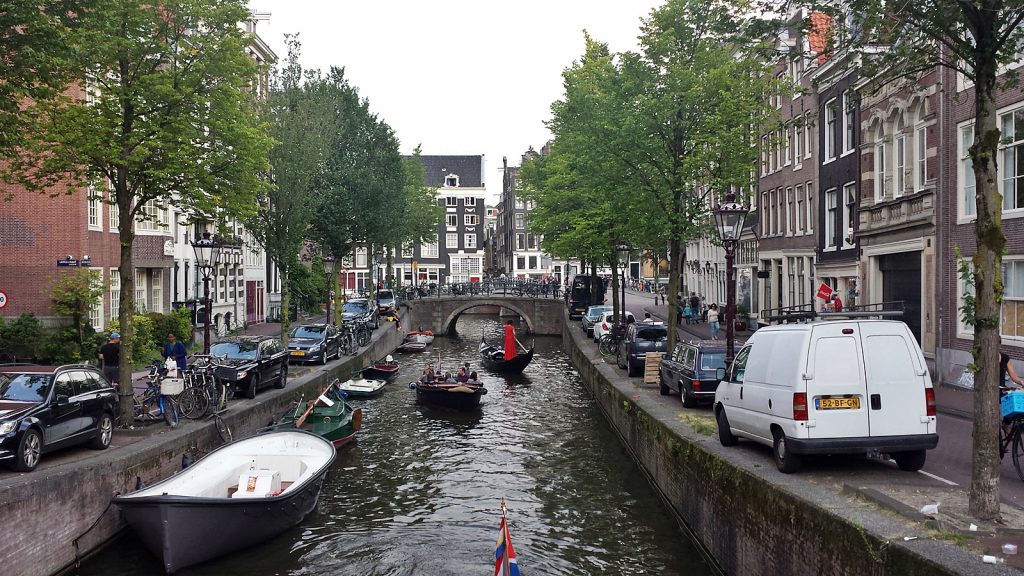 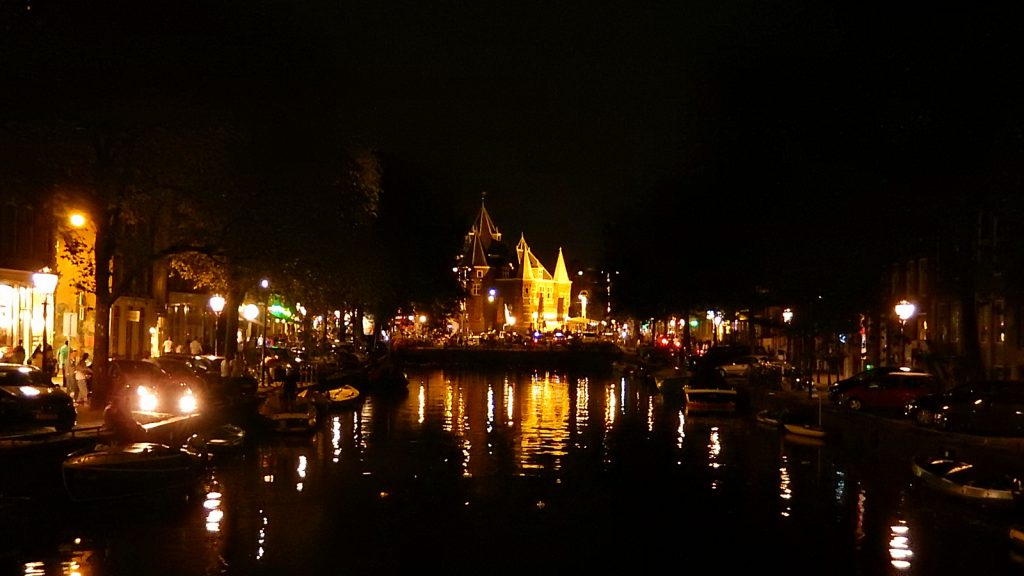 We must be insane

When we were in Linz quite in the beginning of our roadtrip, we were asked if we went to the hockey champions league game to Düsseldorf. For us it had been too late since we already wanted to be back home by then. Now it is only one day till the game, and actually Düsseldorf is nearly on the way from Amsterdam to Hamburg. Those who know us are aware where we are heading now. 😉 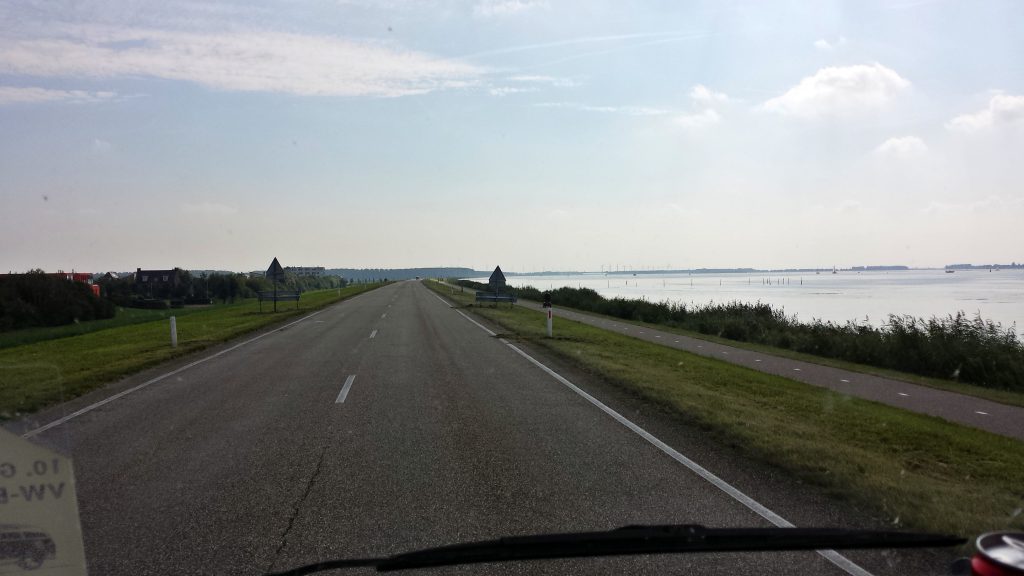 Over the dyke to Düsseldorf

Since Düsseldorf is not that far away from Amsterdam we start around noon and take the scenic route along Dutch country roads. This is only partly recommendable since Dutch traffic planners try their best to send all through traffic on the motorway by making the passages through the villages and towns as unattractive as possible. Therefore they implement “Drempel” (bumps), traffic islands, 30km/h-zones and anything no motorist needs into the roads. 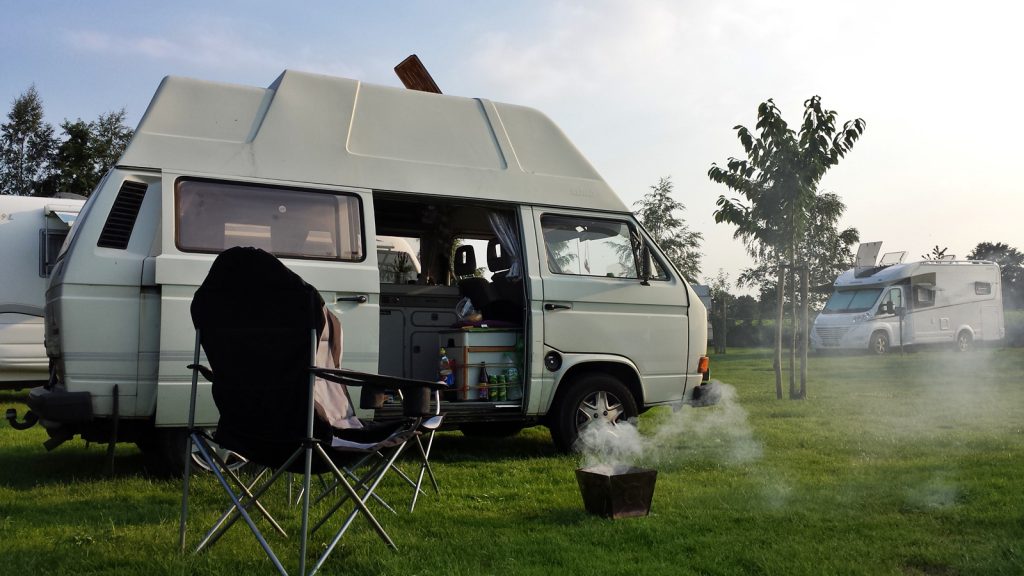 Small camperstop at the Belgian-Dutch border

About 100 kilometres short of Düsseldorf at the Belgian-Dutch border we find a small private camperstop. There is a supermarket directly next door so we can finish off the day with a barbeque for the last time during our roadtrip. 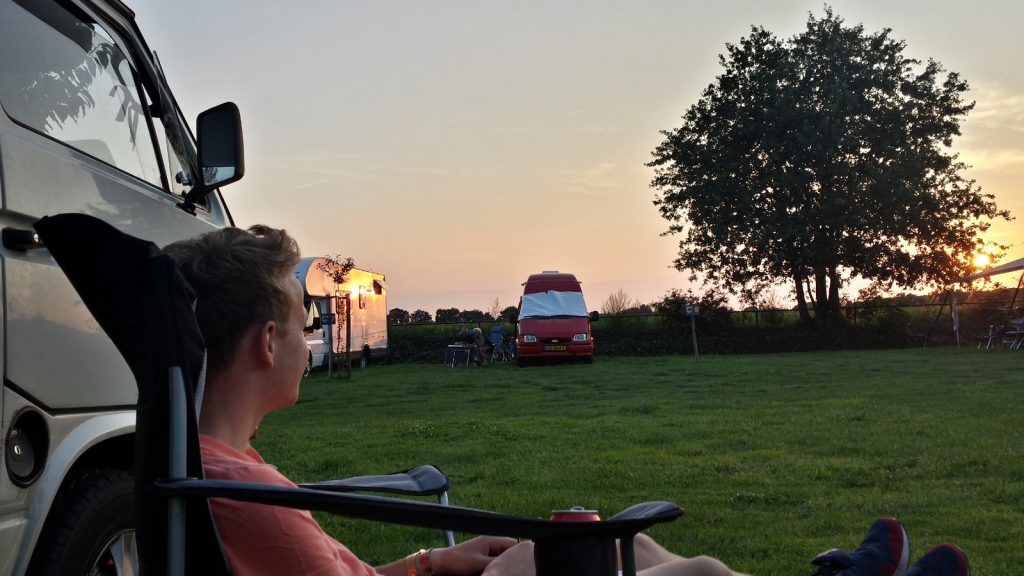 Nothing Works Without Hockey

Today we start on the last leg to Düsseldorf. We arrive at the ISS-Dome, the ice arena of the Rhine metropolis, at 12 o’clock, but unfortunately the ticket office is still closed. So we directly head to the campsite in Meerbusch on the other side of the river Rhine. 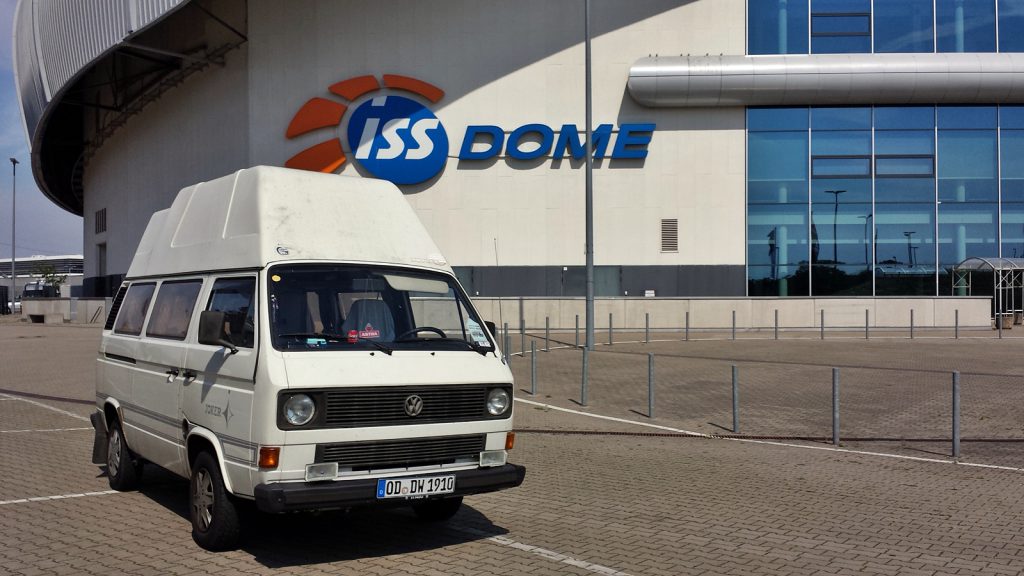 We get a wonderful pitch with one of the Didimobile’s fathers in view and soon head for the city center. The evening is great; apart from us our friend from Heidelberg and many hockey friends from all around Germany have come to Düsseldorf and, together with our dear friends from Austria, make this evening a fantastic and remarkable hockey party. 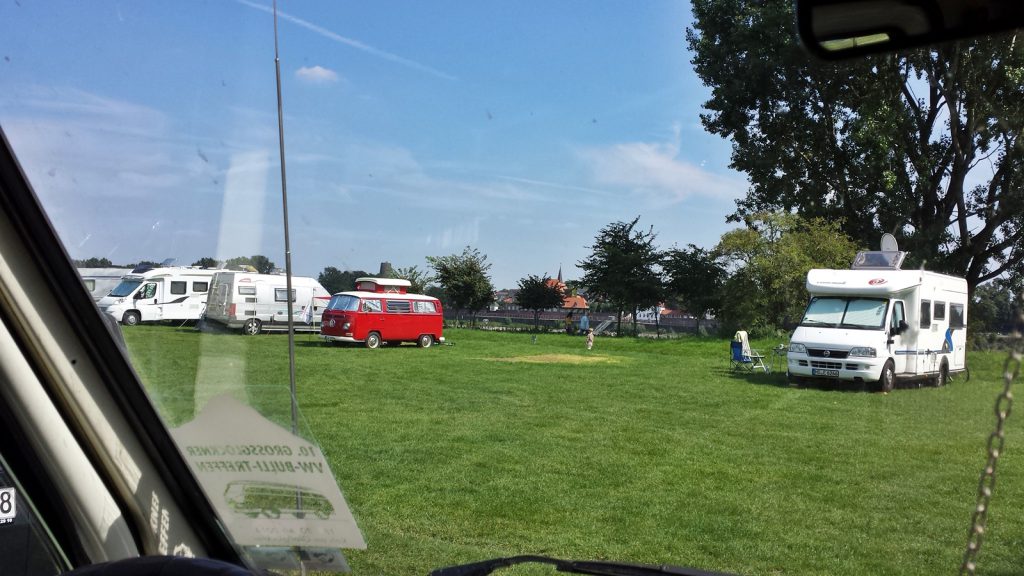 After exactly 28 days, 5,245 kilometres, seven countries, three different currencies and a minor breakdown the Didimobile and its globetrotters has finally returned home safely.
Once again it was an impressive and remarkable roadtrip, way too short like always and joined mainly by pure sunshine.

The next planned trip will take the Didimobile to England again in April 2016. Where the summer tour will lead us is still completely open.