We have not slept really well. The thoughts if the journey should find an abrupt end here at the foot of Bernina Pass were somehow prevailing. At half past seven we get up, freshen up and brush our teeth, and then – punctually at eight o’clock – the Didimobile is allowed to enter the hydraulic ramp in the garage. 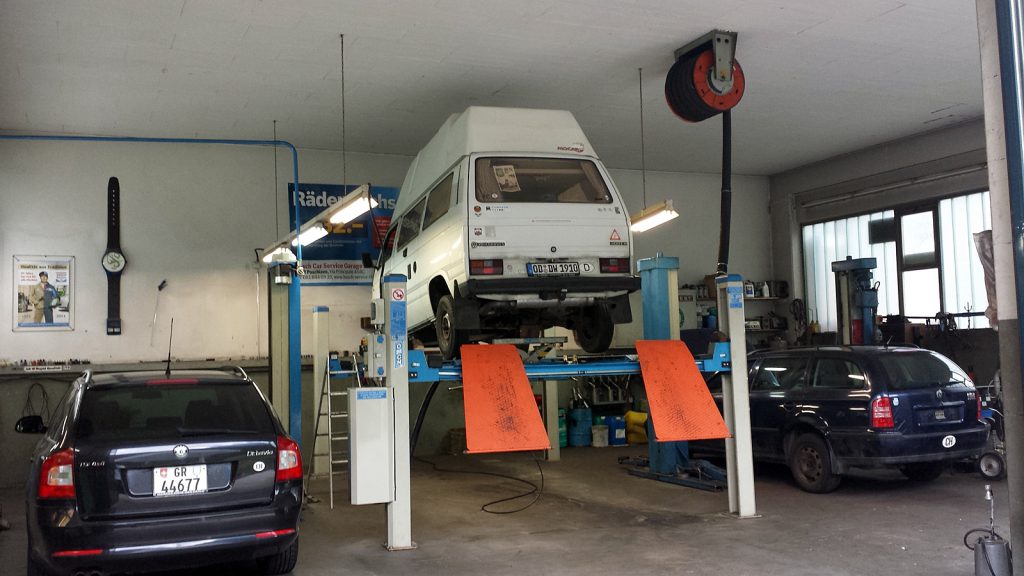 In the meantime we explore the surrounding area a bit and spot an old sawmill down at the river. Whether it is actually still in use or rather a museum, we unfortunately are not able to find out. 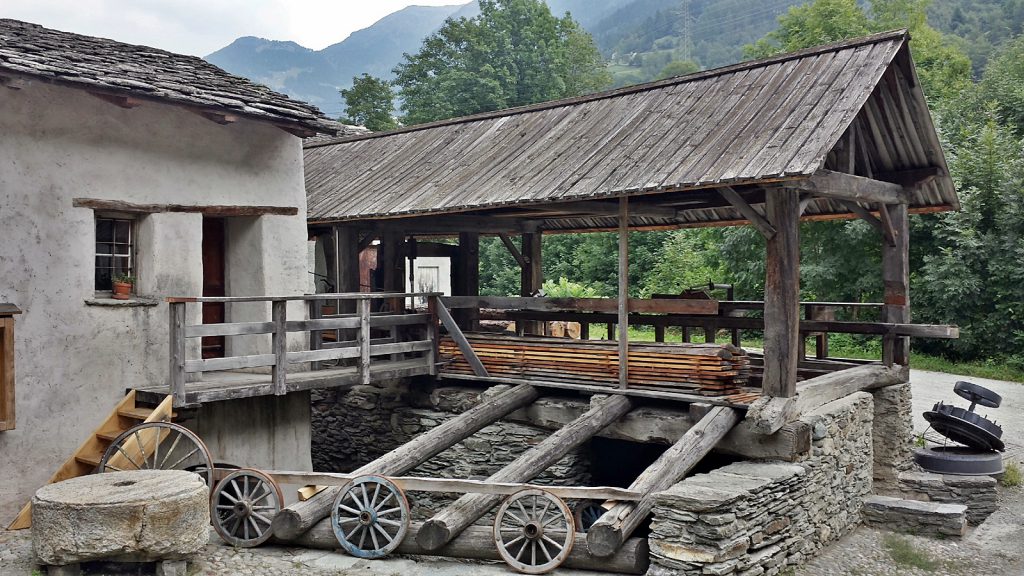 After a very long 60 minutes we finally receive the redeeming news: It really was the dry axle bearing which only needed some new lubrication and we can continue our journey. We give that great and kind mechanic 20,-€ (by now we do not own any Swiss Francs since we have not come across any bank until now), the costs for the repair are taken over by the German automobile club ADAC, as he tells us. Thus we have not only saved the 40,-€ for the campsite. (Y) 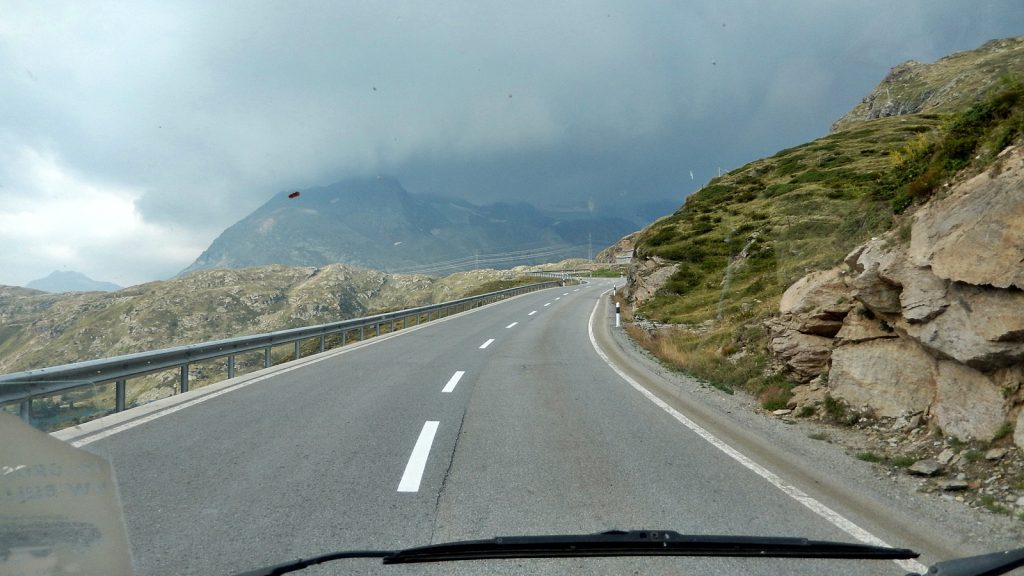 Time to risk a new ascend to Bernina Pass, which is working out perfectly this time. Yesterday we were only missing three kilometres to the summit… 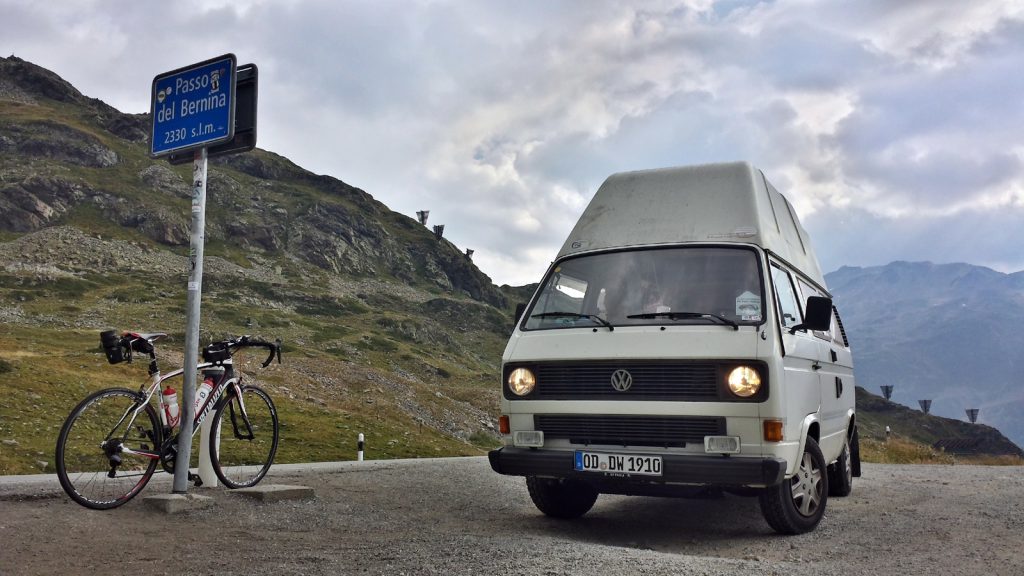 After the summit we find ourselves on an alpine plateau next to a lake called Lago Bianco (White Lake), which does rather look kind of tealish-green instead of white. 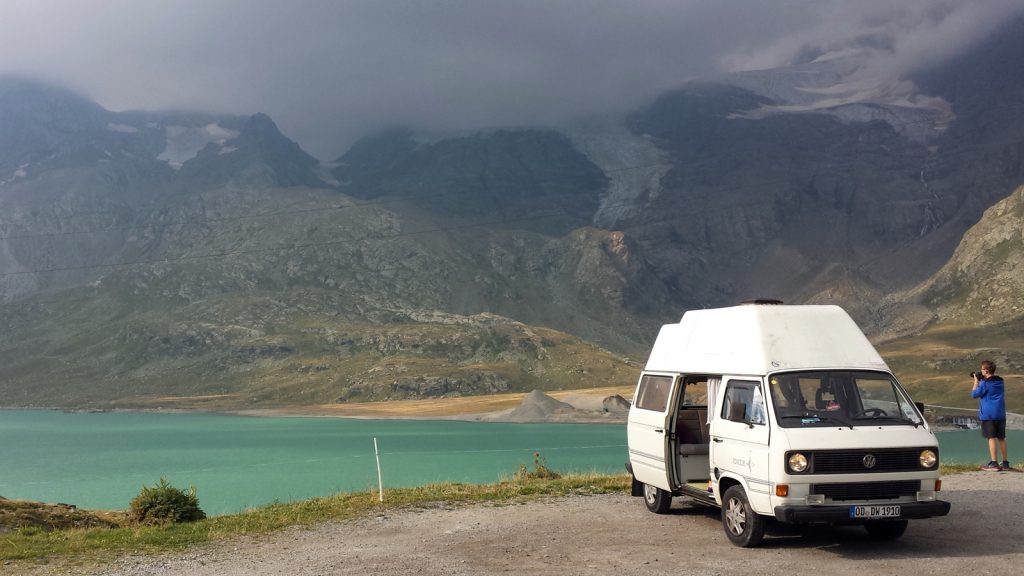 The road continues alongside the world famous Bernina railway, which has been a UNESCO World Heritage site since 2008 and links St. Moritz with Tirano via Bernina Pass. 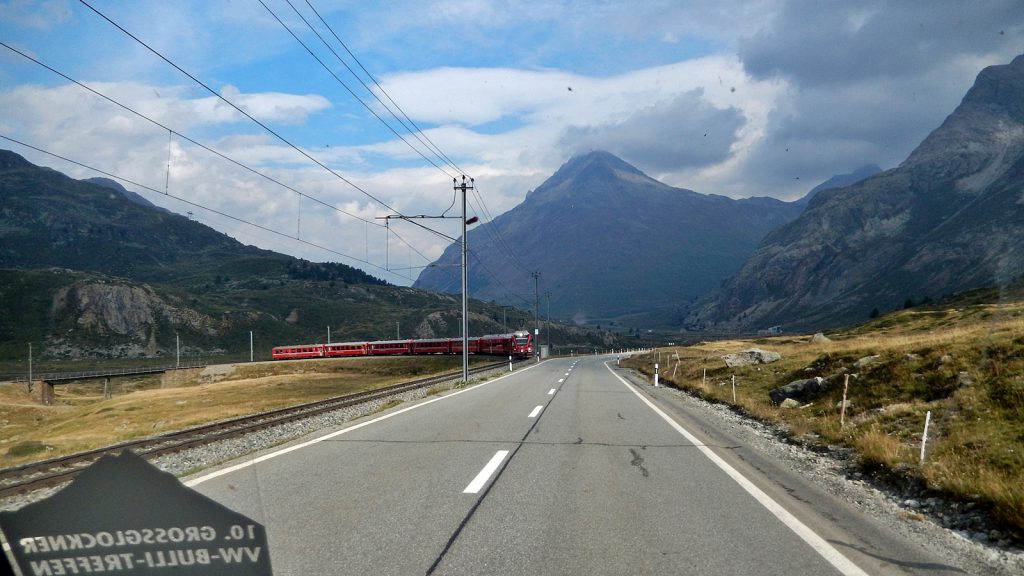 On the way to Zurich we also come along mighty Morteratsch Glacier, whose peak is unfortunately covered in clouds today. 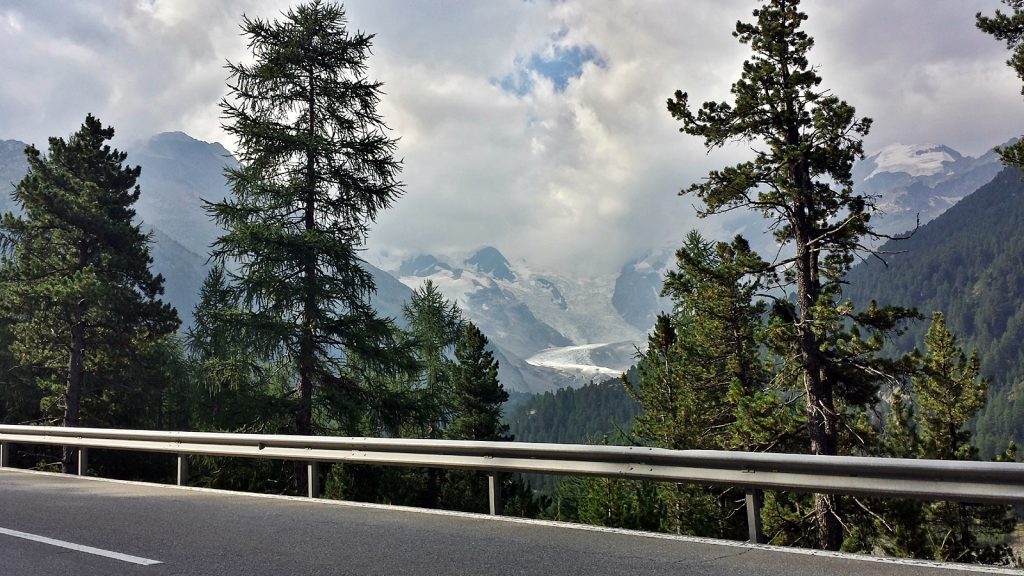 Instead of paying 40,-€ for using the Swiss toll motorway to cross the Alps through long tunnels, we take the more scenic route over the mountain passes. In the end the motorways would only save us some three hours on our 200 kilometres journey anyways. 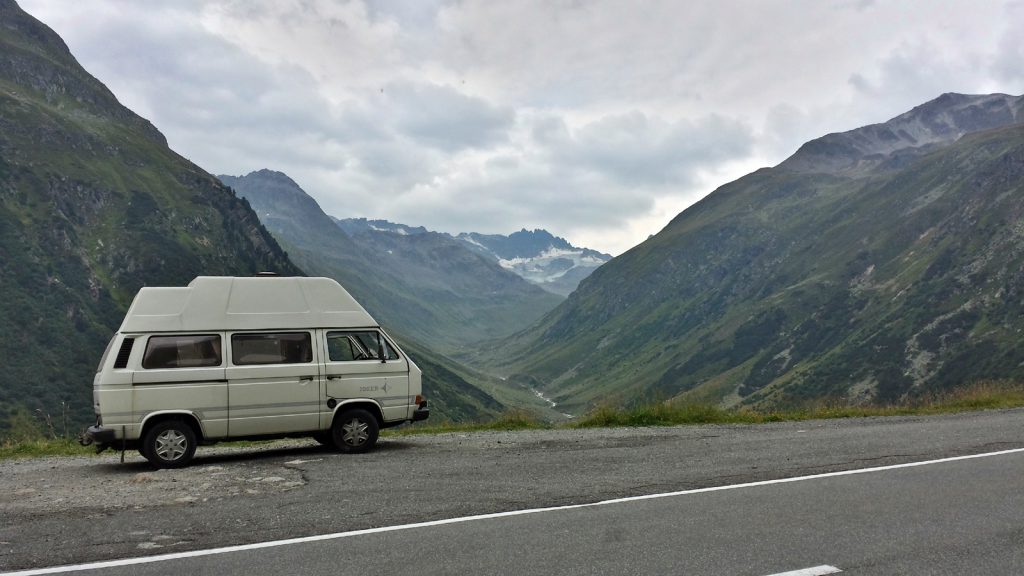 Actually we want to do a short break at Flüela Pass, but just at the moment we reach the summit, a coach full of senior citizens is arriving from the other side, letting its load swarm around orientationless everywhere which makes us leave in a hurry and continue our trip. 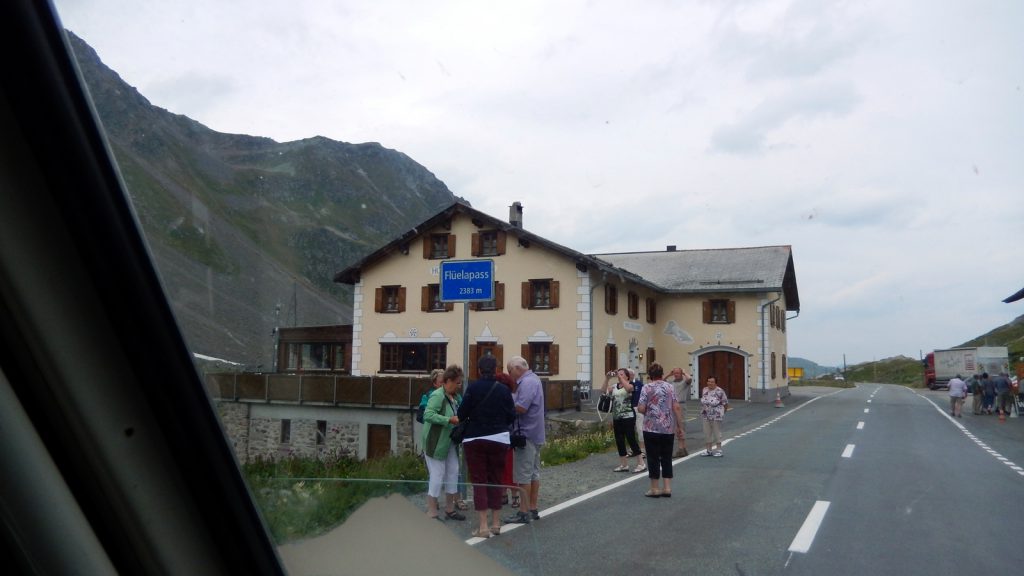 The smooth descent again leads through nearly untouched high alpine scenery, only the weather does not want to become brighter behind this mountain pass. 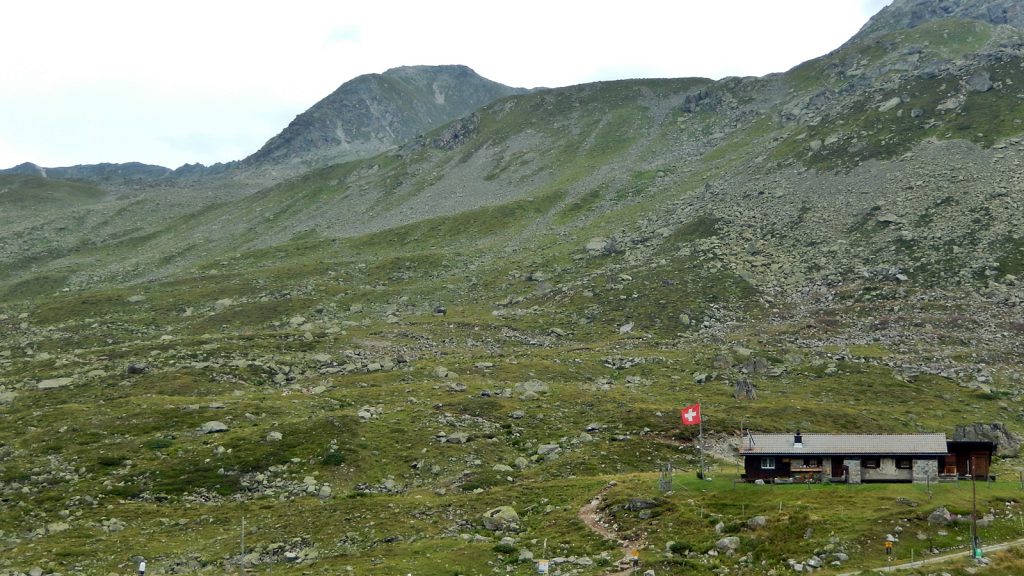 After nearly seven hours and the crossing of several 2,000m high mountain passes, we finally arrive at Zwillikon, where the Bullitreffen (VW Bus convention) is held at the local shooting club by VW-Bus-Freunde Schweiz (VW-Bus Friends Switzerland). 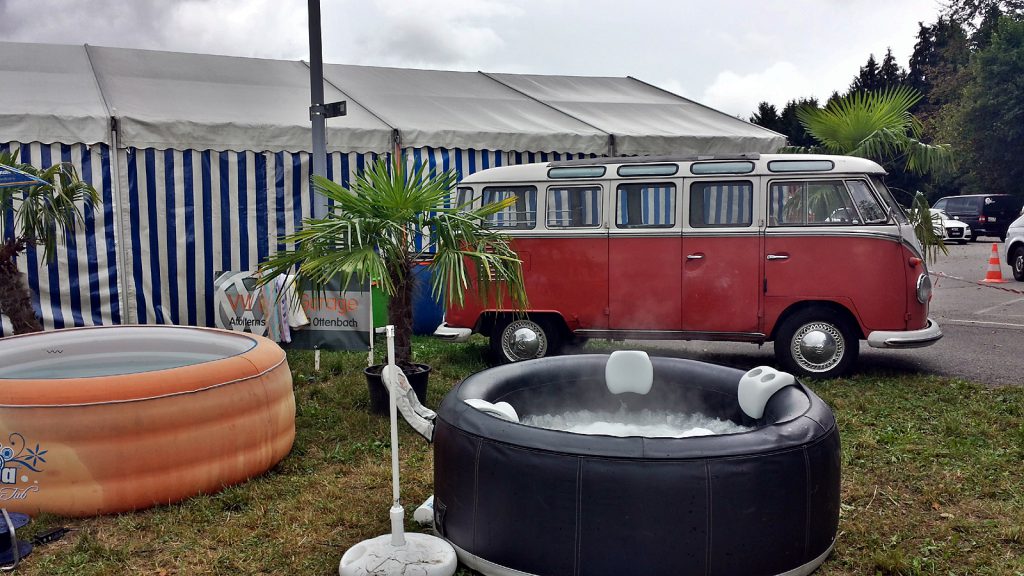 It should have become a great beach party.

Unfortunately today is a very rainy day, temperatures are around 17°C and therefore not exactly what we have been used to during the last few weeks. Nevertheless it is a wonderfull little family-like VW-Bus convention. 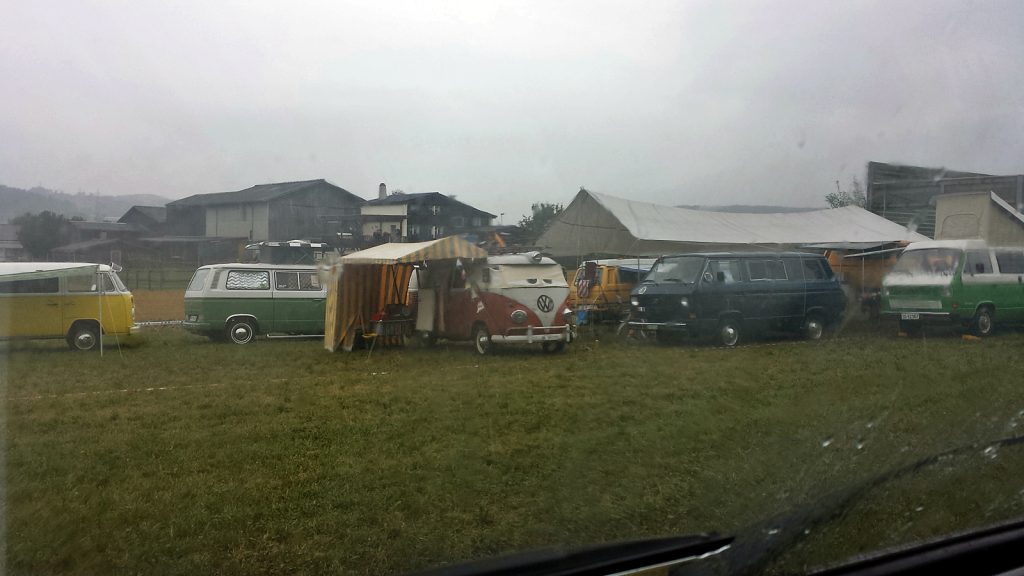 Today we are leaving Switzerland towards Germany again. The son wants to visit some aquaintances in Heidelberg, and so we hit the road going there. But not without making use of the probably greatest shower of all our roadtrips so far for a last time. 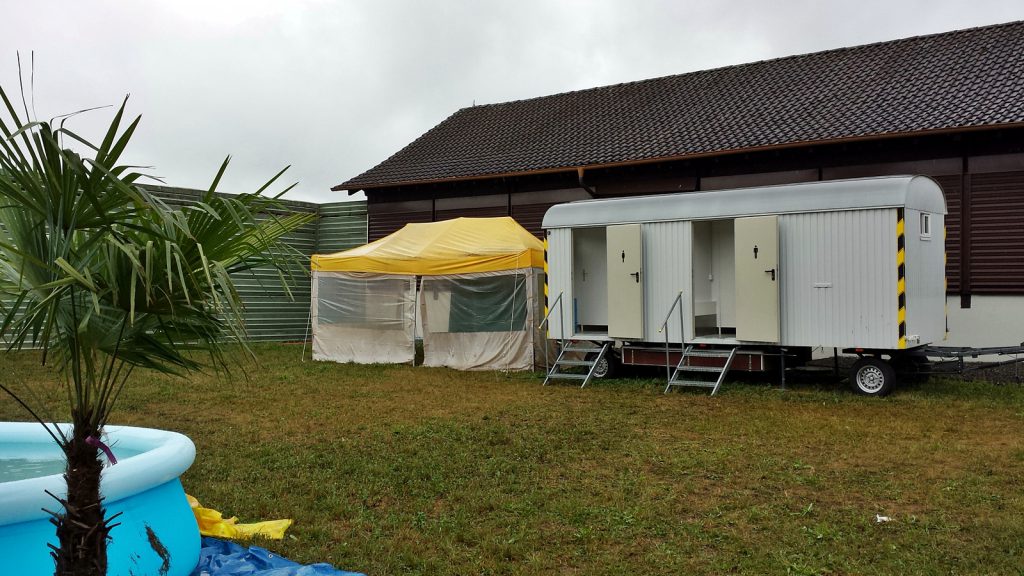 Greatest shower in the world in the tent next to the toilet car.

The weather is still mixed, thus leaving Switzerland becomes way easier this morning. We cross the border and the Rhine river at Koblenz (Yes, at Koblenz. This Koblenz is situated at River Rhine in Switzerland and is NOT the famous Koblenz at the Mosel River joining the Rhine…) and hope for better weather at the Black Forest where we want to have a ride on the local tobbogan coaster. Luckily, it actually stops rainig for some minutes.

Back on the German Autobahn we are heading towards the rainbow. Now we must really have luck on the rest of our tour. 😉 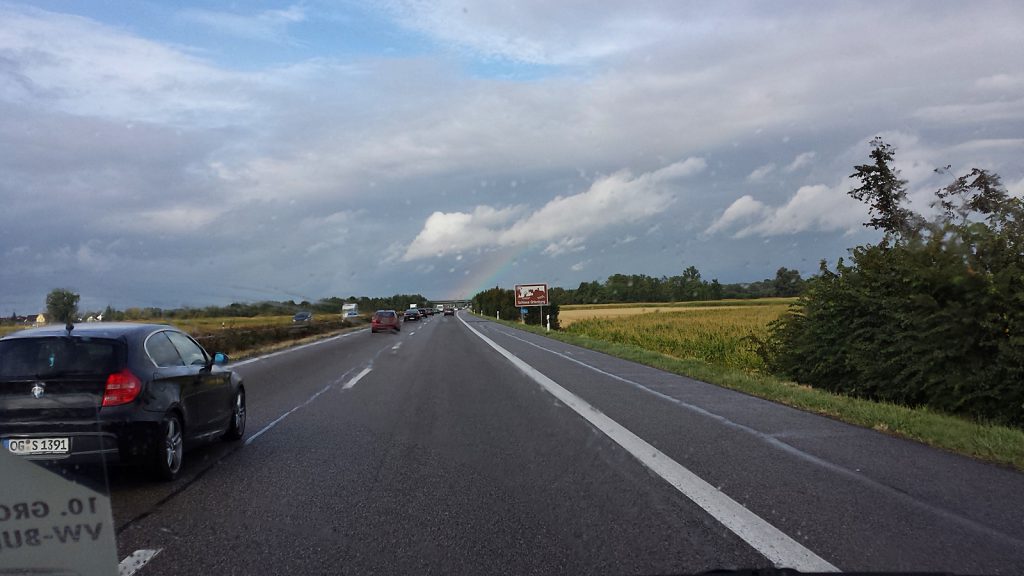 There is a pot of gold at the end of the Autobahn.

We reach Heidelberg in the evening. At the campsite directly at the banks of river Neckar we actually get a pitch next to the river, and since it is quite dry at the moment we head into town to fetch something for dinner. 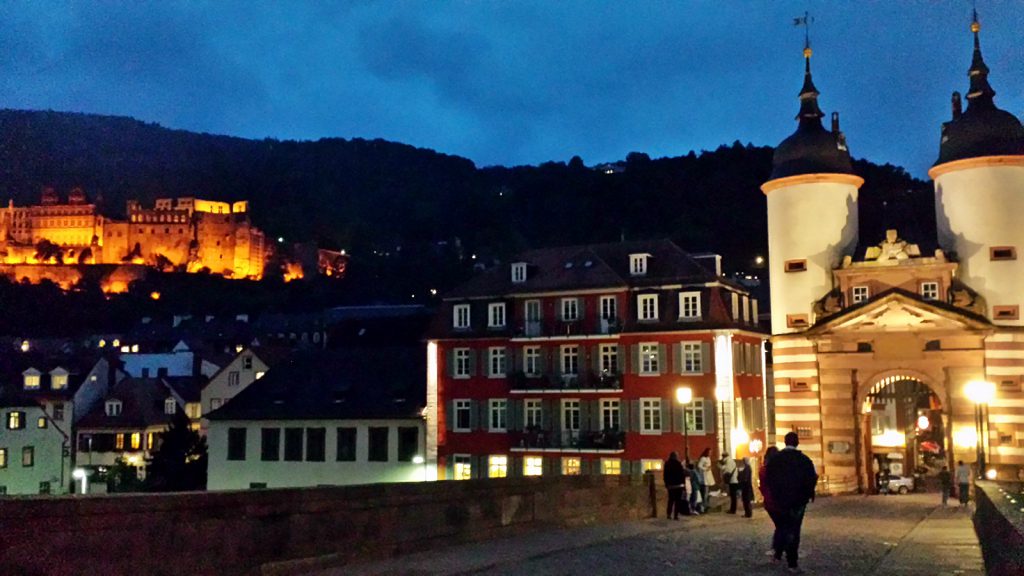 We eat at the Weisse Schwan, have two or three beers and fed up and tiredly head back to the campsite.

We don’t care for the bad weather this morning. Since Junior only wants to meet with his aquaintances around noon, we can sleep really long this morning. 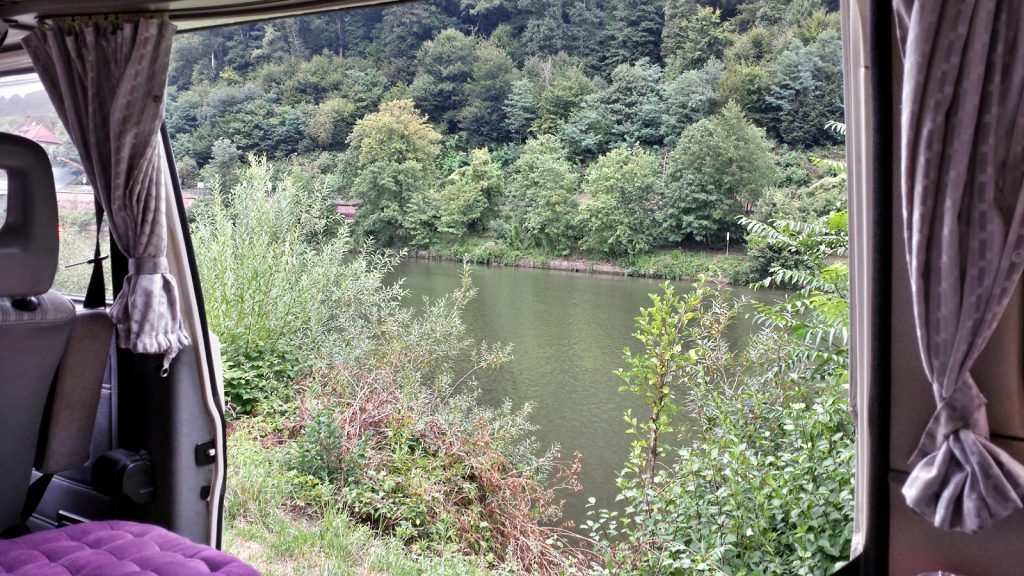 Morning view of the Elbe river. … No, the Neckar river.

At elevenish we drive to a Heidelberg suburb to meet with Junior’s aquaintances and have a delicious Thai lunch. In the afternoon we have an appointment with a dear hockey friend of us who shows us a bit of her hometown. One of Heidelberg‘s main attractions apart from the Old Town is Heidelberg Castle, or better it’s ruins. 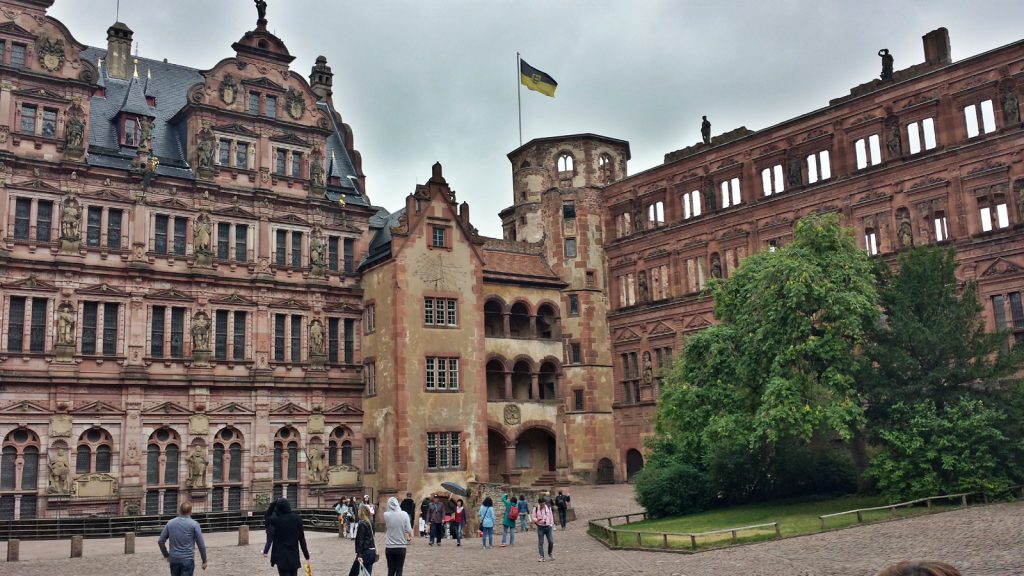 From the castle, which is nowadays used as a cultural centre, we have a fantastic view over Heidelberg. Inside the castle there is the world’s largest wine barrel with a capacity of 220,000 litres. Legend says that one single person had once drunk up the entire barrel in one evening. 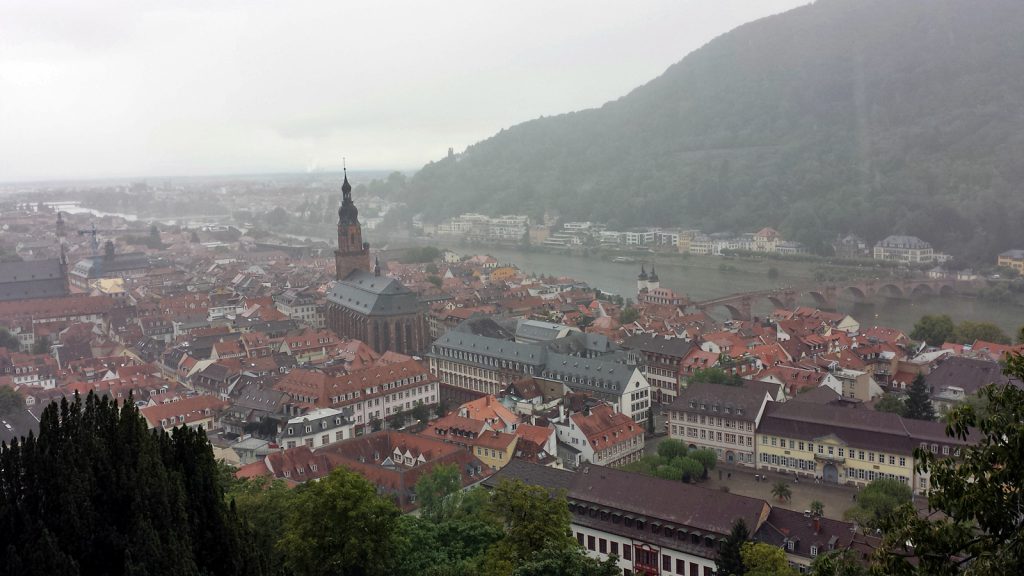 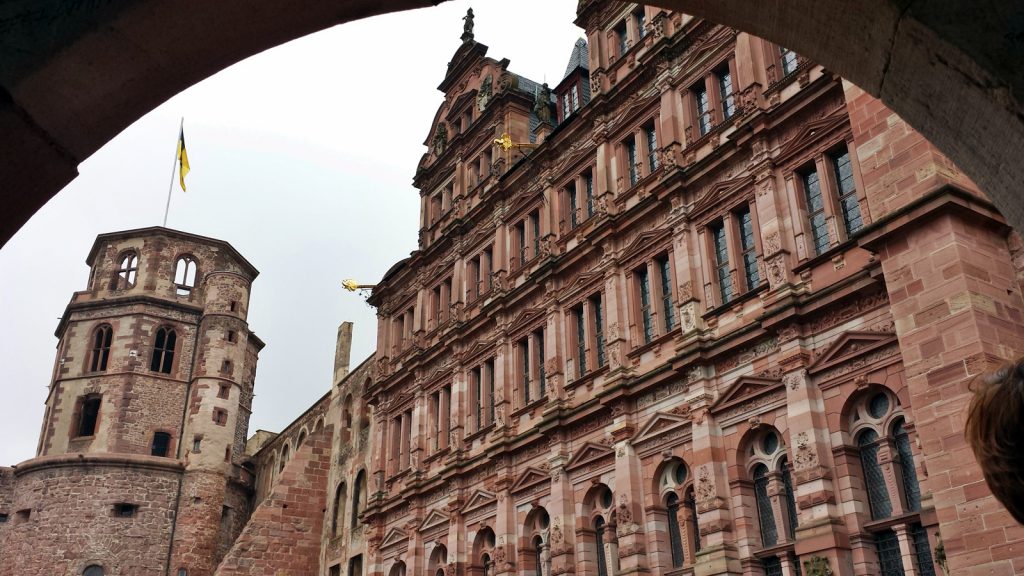 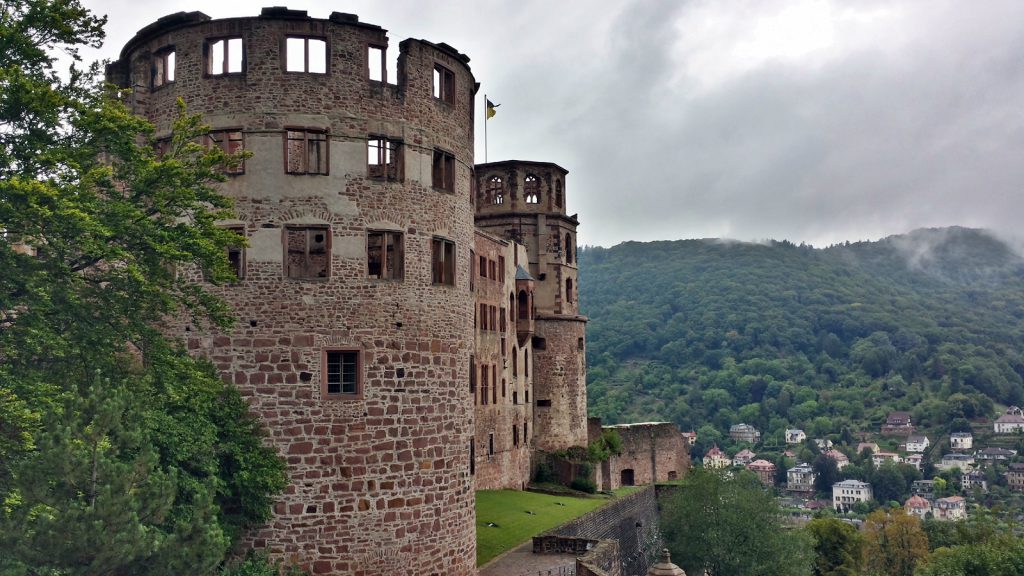 The evening we spend in one of the many venerable student pubs and arrange for a Schnitzel meal at Haus der 100 Schnitzel (house of the 100 schnitzel) the next evening.