Today, we’re heading towards Italy. The Brenner Pass is not far from Stubaital Valley, and thus we cross the border to Italy after about an hour. The old Brenner Pass mountain road is a pleasant drive, there is only little traffic because most drivers use the toll motorway.

About 20 kilometres south of Brenner Pass, the Strada Statale 44 road, better known as Jaufen Pass, branches off the Brenner Pass road. The Didimobile slowly climbs up this mountain pass, and we reach the summit at 2,094m during the midday sun. Yet it is comfortably cool up here on top of Jaufen Pass.

Jaufen Pass summit offers great views into Passeier Valley. Down there I know a fantastic pizza restaurant in St. Leonhard from some years ago. Since both of us are already quite hungry we continue our journey down the narrow mountain road into the valley. 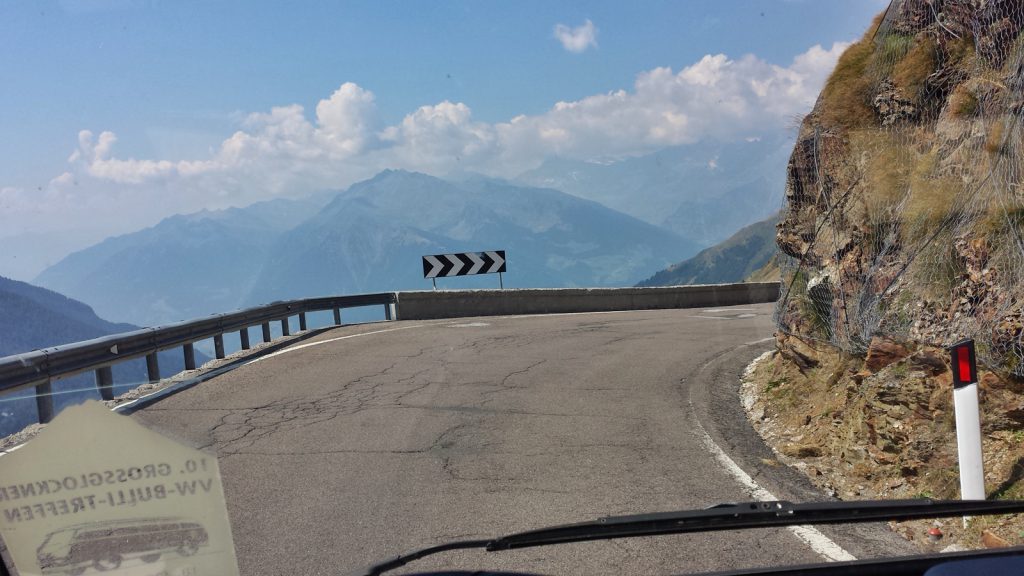 Nearly all seats at Brückenwirt are already taken, luckily we can still find a place in the shade, because down here temperatures are more than 30°C again. Two people can easily be fed by a single delicious standard pizza here. Nevertheless both of us manage to have a single pizza on our own. Who knows when we will get the next meal? 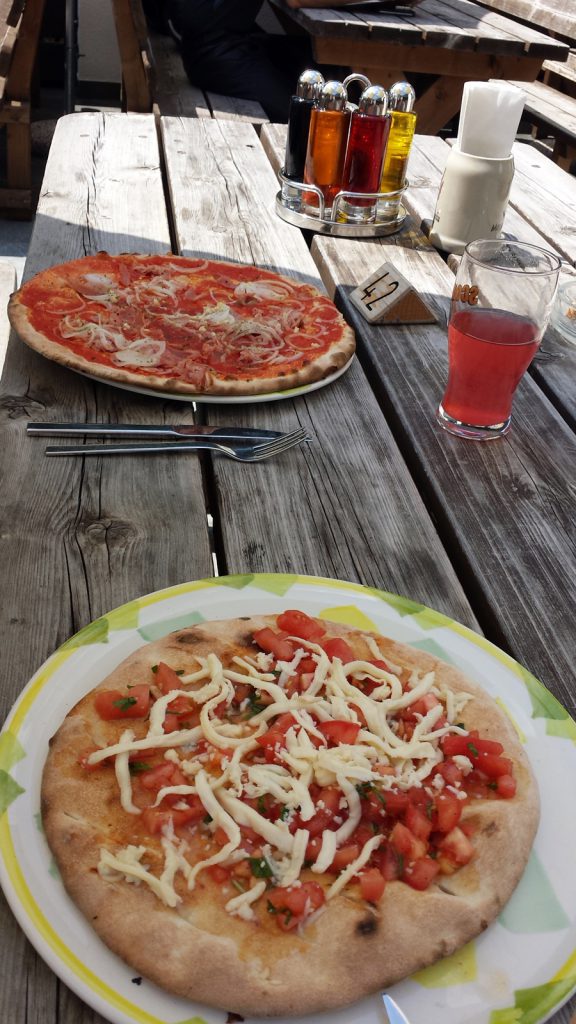 Lunch at “Brückenwirt” in St. Leonhard

Meanwhile it is nearly 2 o’clock and we still want to go 200 kilometres further south to Lake Garda. Without using the motorway, of course, because they also charge toll here in Italy. Thus it is only a question of time until we come across some really strange village names: This one here is called “Unsere liebe Frau im Walde – Senale”, which translates as “Our beloved wife in the forest”. 🙂 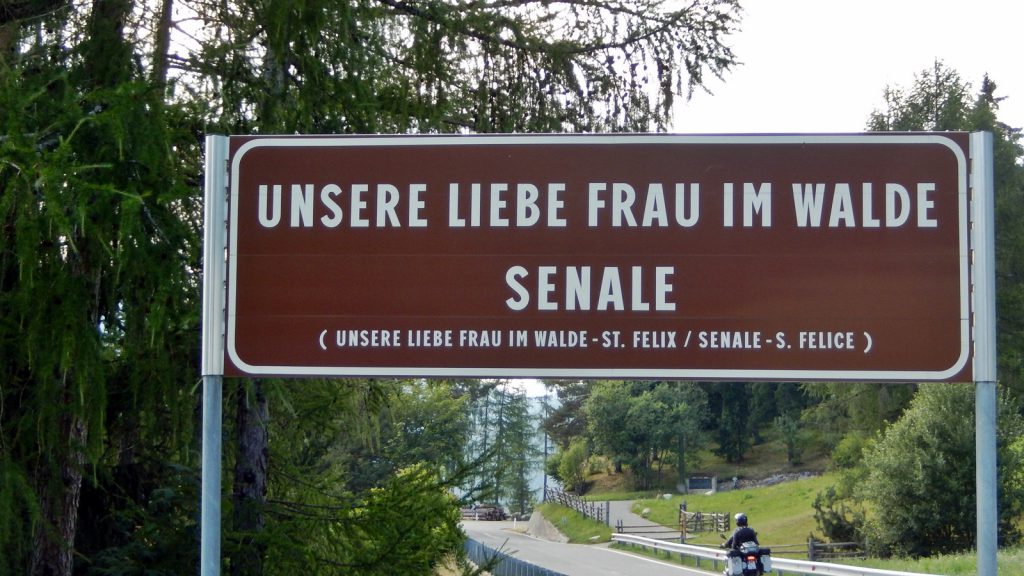 “Our beloved wife in the forest” at Gampen Pass near Merano

After an unintentional city tour of Merano (the whole city seems to consist of one way roads only and they have not invented the signpost yet…) and the crossing of two more mountain passes we finally reach the dream destination of most Germans: Lake Garda. The infamous Gardasena Occidentale, one of the greatest roads in the world, meanders alongside the western shore of Lake Garda. Many movies have been shot here, with James Bond Quantum of Solace being one of the most memorable ones. Unfortunately the road can hardly cope with today’s traffic, thus stopping for a photo is nearly impossible due to heavy traffic and the narrowness and the many bends and tunnels along the road. 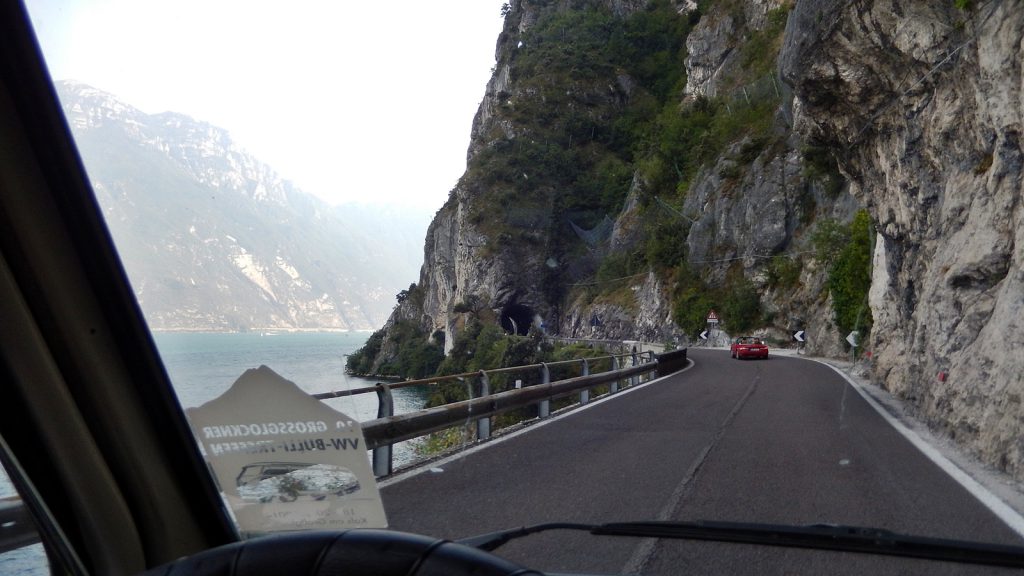 On the internet I had once read of a small mountain road along Brasa Canyon. This is said to branch off the coastal road nearly without any signage behind one of the many tunnels. 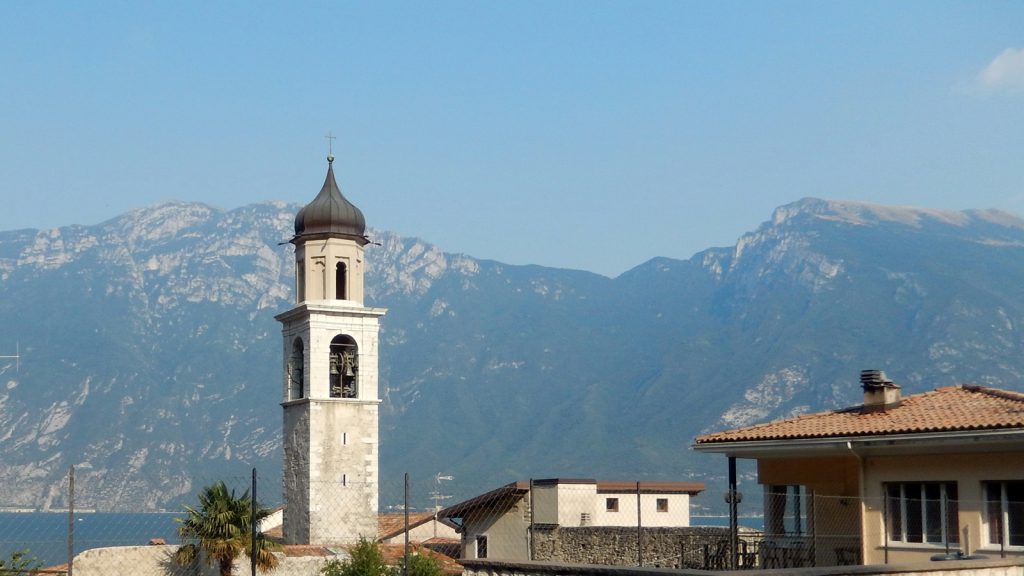 At first attempt we find the junction, and the road immediately starts to climb steeply, still parallel to the coastline. At the first hairpin bend there is a fantastic view over Lake Garda and onto the small village of Campione del Garda. 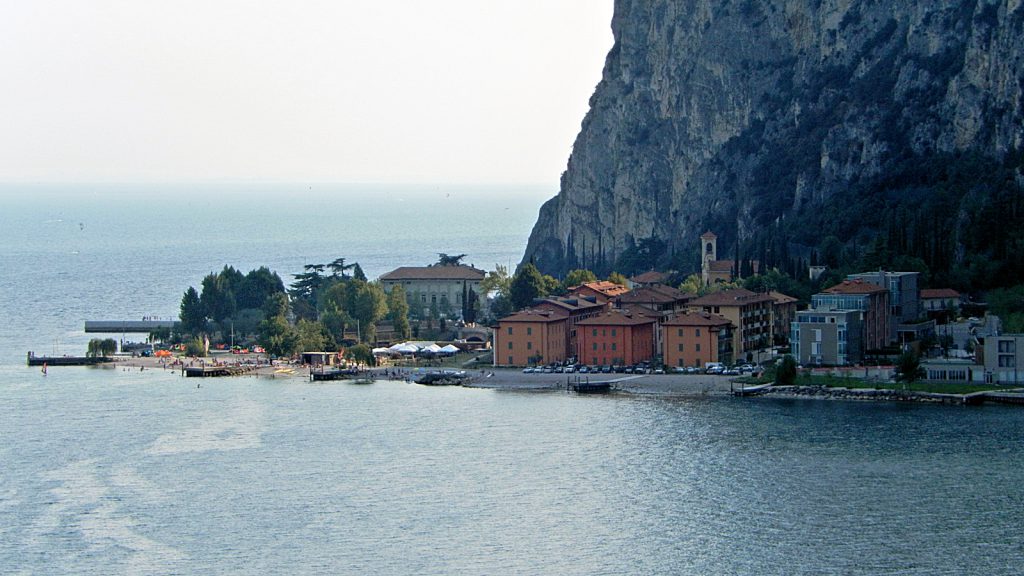 The road spectacularly continues along the edges of the steep slope, through small tunnels and further on through the narrow – or rather very narrow – Brasa Canyon.

Unfortunately there are no hight limits displayed along the road so I am not quite sure if the Didimobile at a height of 2.7 metres will fit through the low tunnels. Luckily it perfectly fits and we get to the top without any scratches. 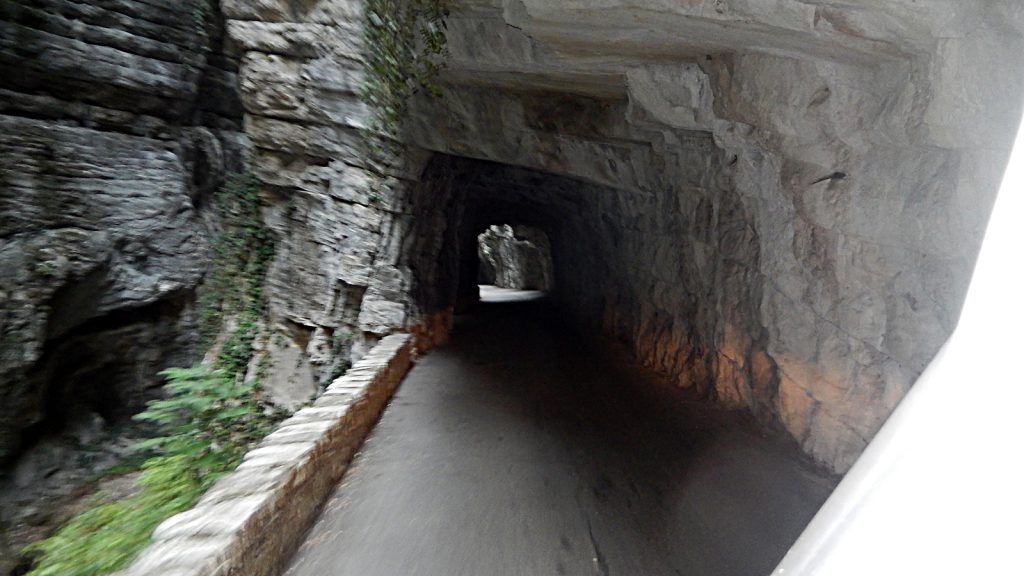 There is no campsite at Pieve at the upper end of the road, so we are heading down again and try to find a place for the night at 7pm in high season at Lake Garda. The first two campsites immediately send us away, they are completely occupied. On a third one, run by Dutch people in Limone, we get hold of a free pitch at 40,-€ the night, which actually is quite cheap for a pitch in high season at Lake Garda. 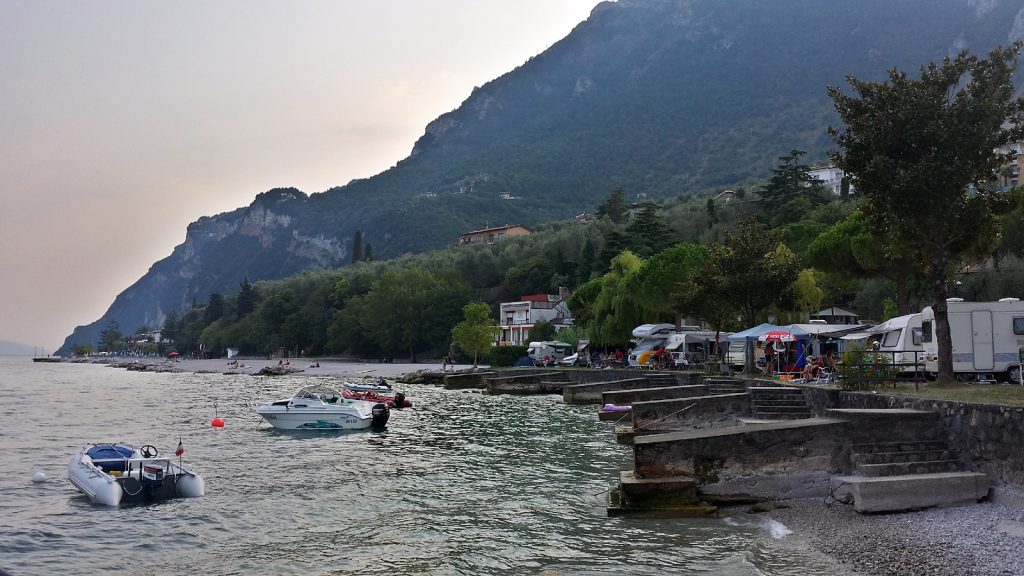 Campsite at the shore of Lake Garda

It is still nearly 40°C outside, but that does not keep us from walking up a small hill and have a good dinner at reasonable prices at a restaurant with some great views over Lake Garda.

This night we slept with open doors and actually not at all. It would not get cooler than 30°C at night, thus it is not any tragic at all that the shower stays cold this morning since we do not have any fitting 500-Lira-coin. 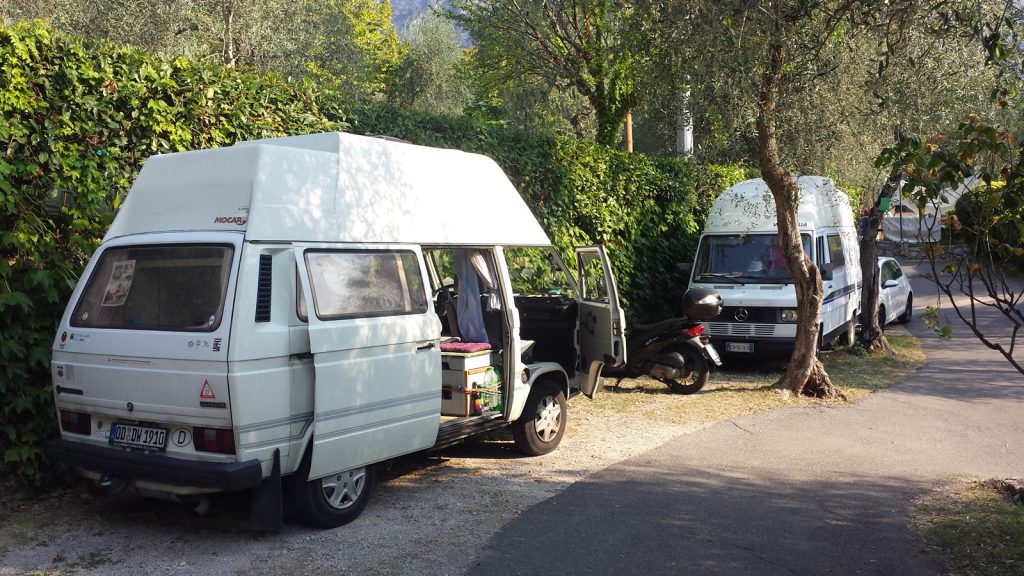 Our small pitch at Limone campsite

We start today’s leg with a short trip to Limone in favour of finding some breakfast. Unfortunately the village is nearly completely blocked off for motorized traffic and not really clear which makes us leave for the most adventurous leg on our tour without breakfast – but one obligatory photo of the Didimobile under a palm tree. 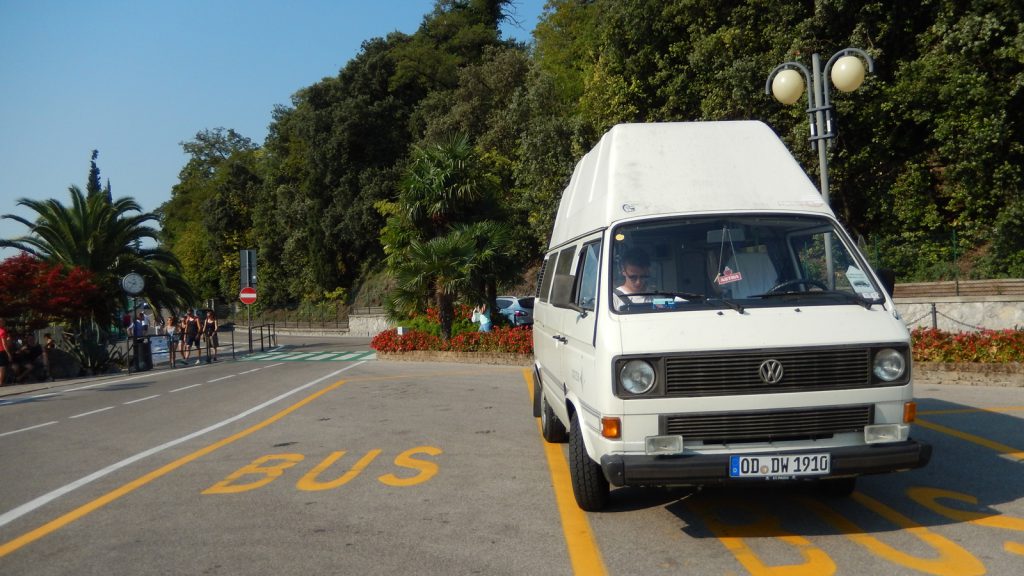 We follow Gardasena road southwards to Gargnano. En route the beauty of the landscape does not decrease in any way. 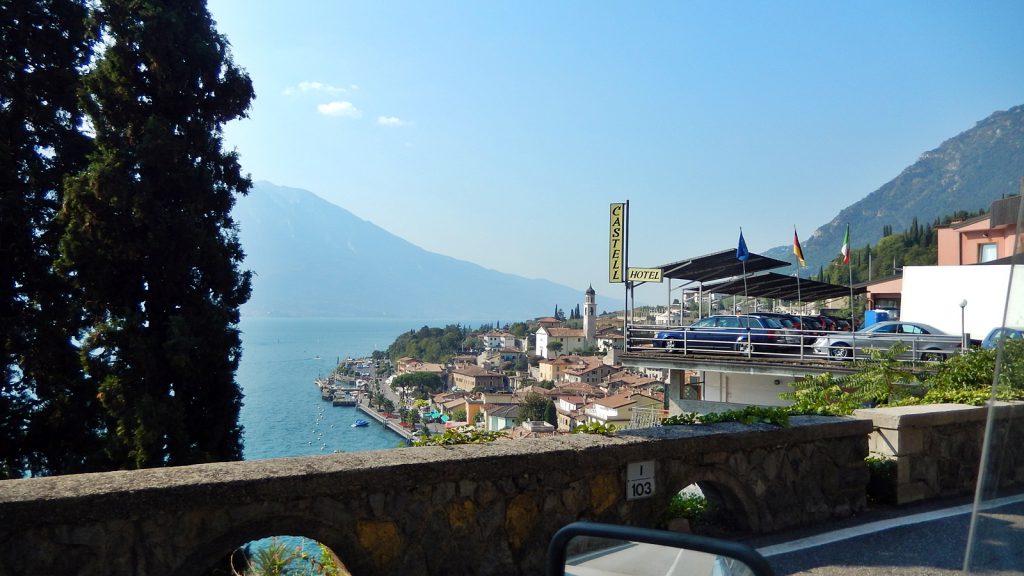 One of many tunnels

In Gargnano we leave Lake Garda and head into the mountains via SP9 road. Just after the second hairpin turn we catch a last amazing glimpse of Lake Garda and Gagnano. 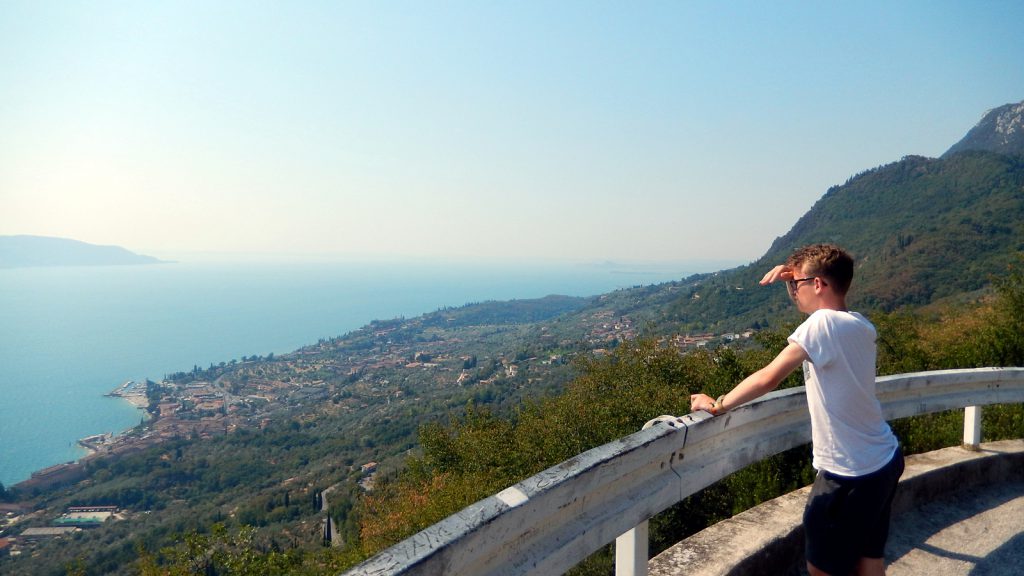 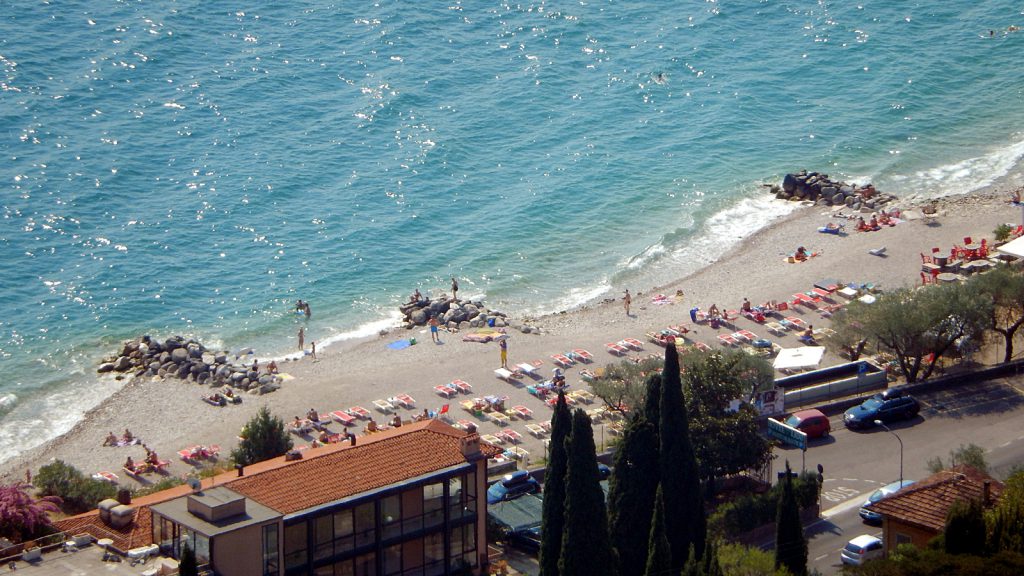 Even in the morning way too hot for the beach 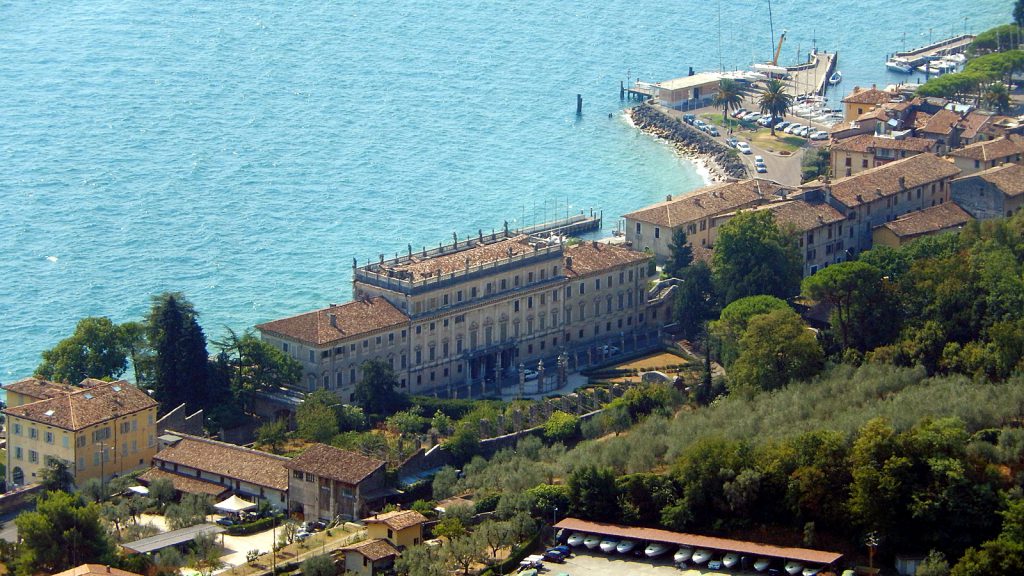 Some 500 meters higher in the mountains we reach Lago di Valvestino dam. Up here it is pleasantly cooler compared to Lake Garda region. 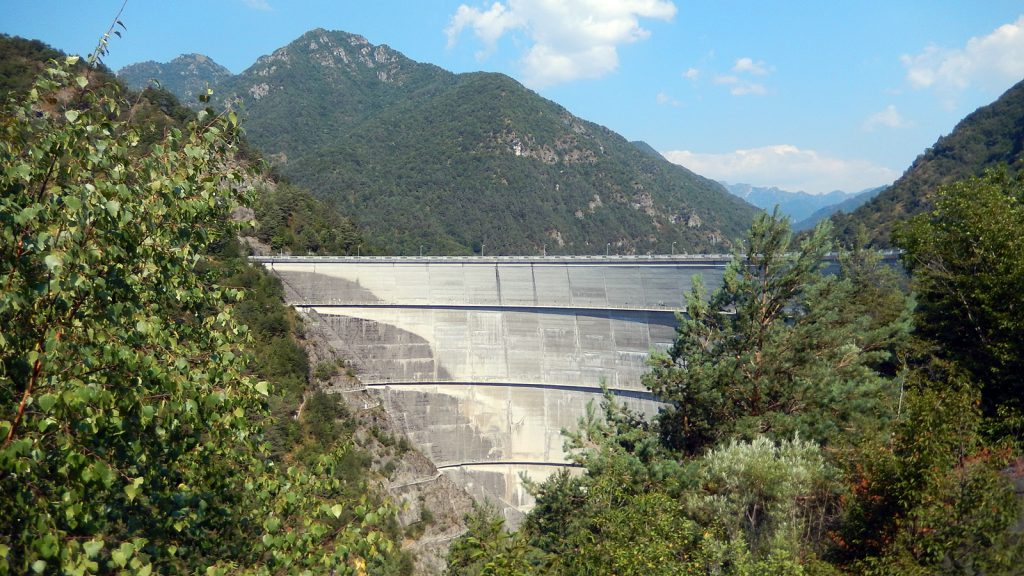 We continue our journey down to Lake Idro, where the Anfo Ridge Road to Maniva Pass starts in the little village of Anfo. This small old military road had been blocked for years after a rockfall, and it is not sure if we will make it over Maniva Pass with the Didimobile. 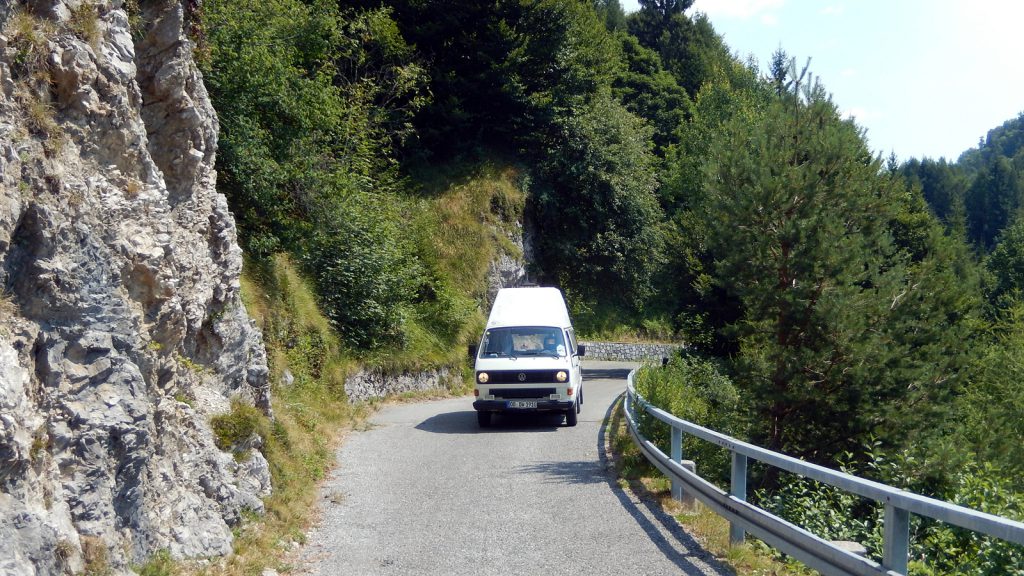 The ascend from Anfo is paved, but mainly single lane with hardly any clear views of the road ahead and only very limited passing places. After some kilometres the loosened up buildings decrease, and after passing a small roadhouse there is no signage anymore and the road becomes a single lane, high mountain road with tight hairpin turns.

We are lucky to be nearly the only vehicle on this road, the last car we met was half an hour ago just at the beginning of the road.

After about one hour of driving the road suddelnly makes a sharp right turn, directly in front of lies a chasm of some hundred meters, secured only by some scattered metal posts. We stop for a minute to enjoy the view when an off-road vehicle overtakes us from behind. Fortunately the road is wide enough here for two vehicles to pass each other, and the fact that the other car also uses this road bolsters us up that the road should actually be passable again. 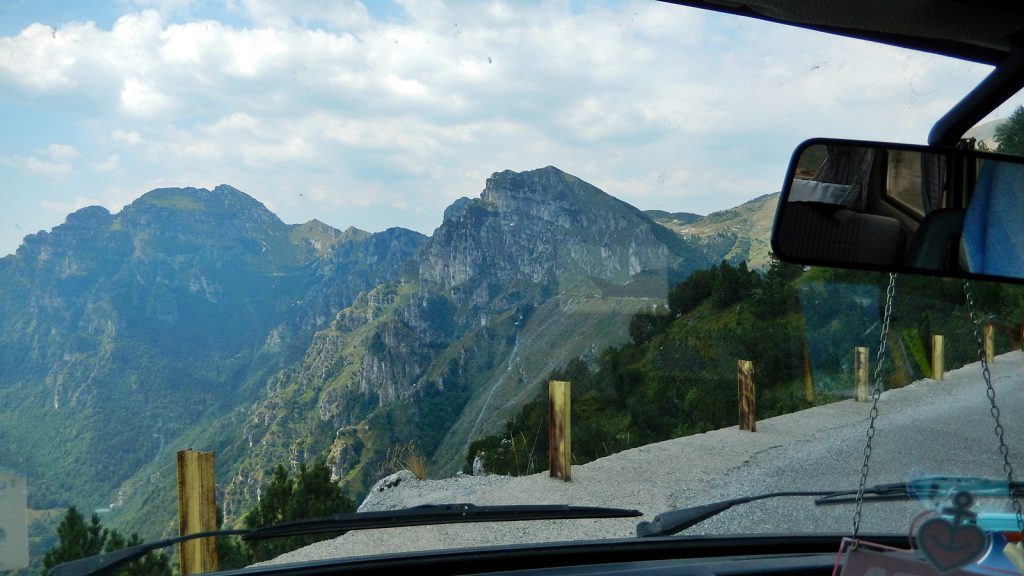 Behind the bend there is an unlit tunnel. It looks high enough for the Didimobile, and thus we dare to enter it, not knowing what awaits us at the far end. 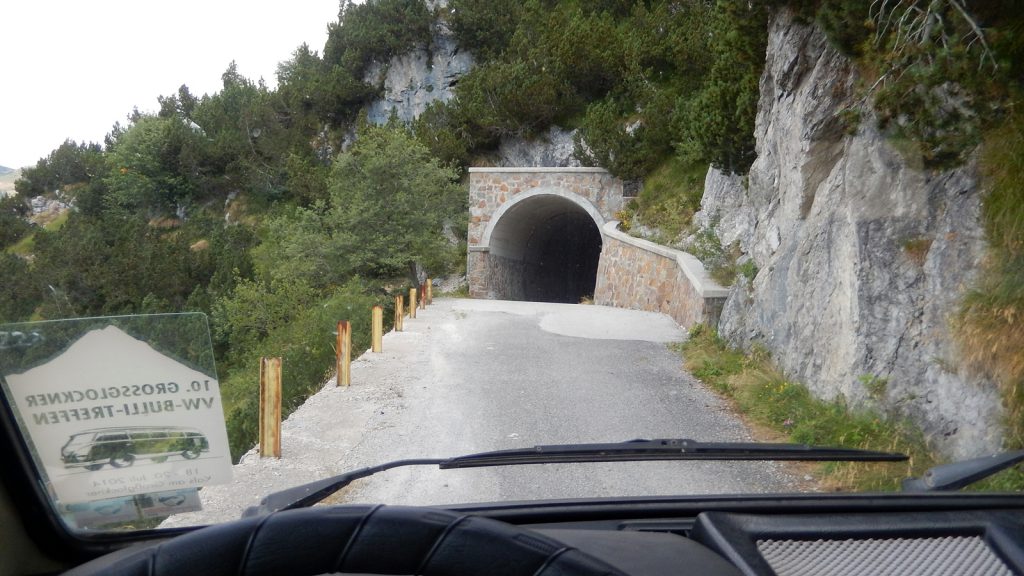 Tunnel: When you get in, it becomes dark.

At the other end there is a short section of road along a vertical cliff on one side and still a near vertical chasm of some hundred meters down on the other side before the road disappears into another pitch black tunnel. 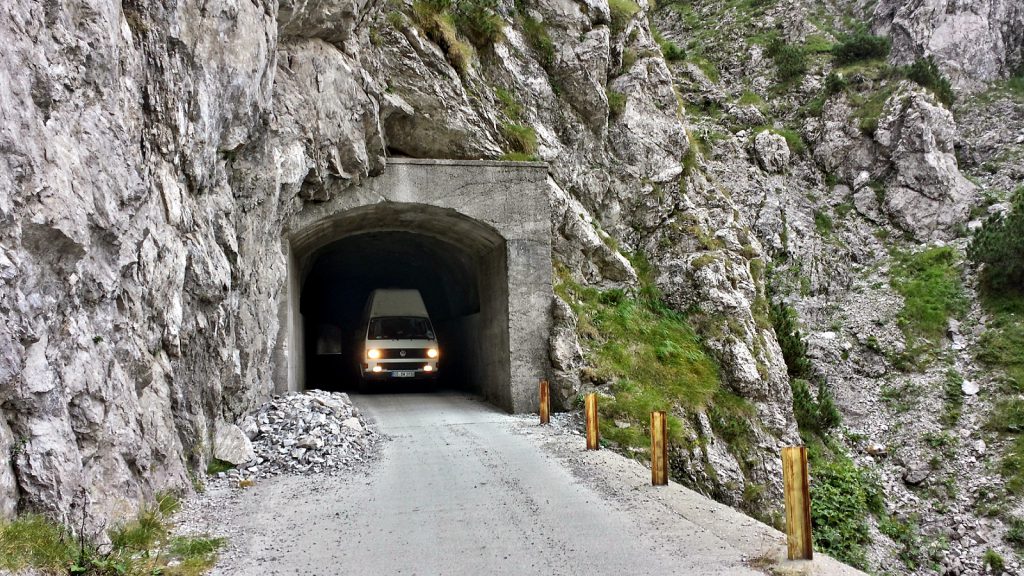 The road which awaits us at the other end of this second tunnel can best be described as “insane” or “awesome”. Single lane in between the vertical rock wall to the right and the deep abyss to the left, again only secured by some small metal poles. It reminds us of a European version of the Camino de la muerte, the Yungas Road in Bolivia. In Germany this road would have been long closed to traffic by the authorities.

The road is simply breathtaking. We maneuver the Didimobile to a spot which is a bit wider than the rest of the road and spend at least another half an hour up here and enjoy the tranquility and terrific scenery. 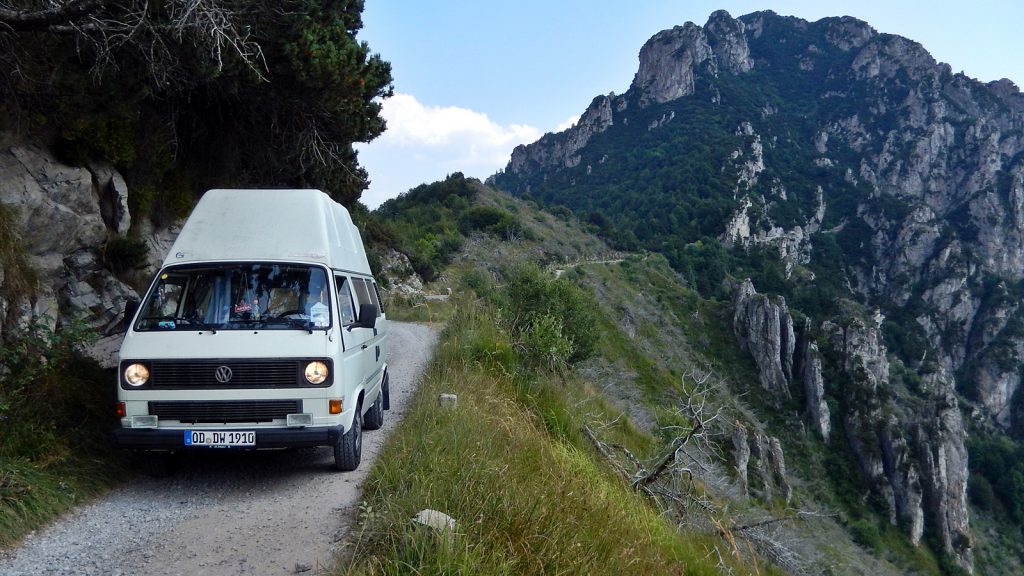 Hopefully there is no oncoming traffic

Some hundred meters further the road’s surface becomes gravel and soon even the metal poles start missing as security measures. 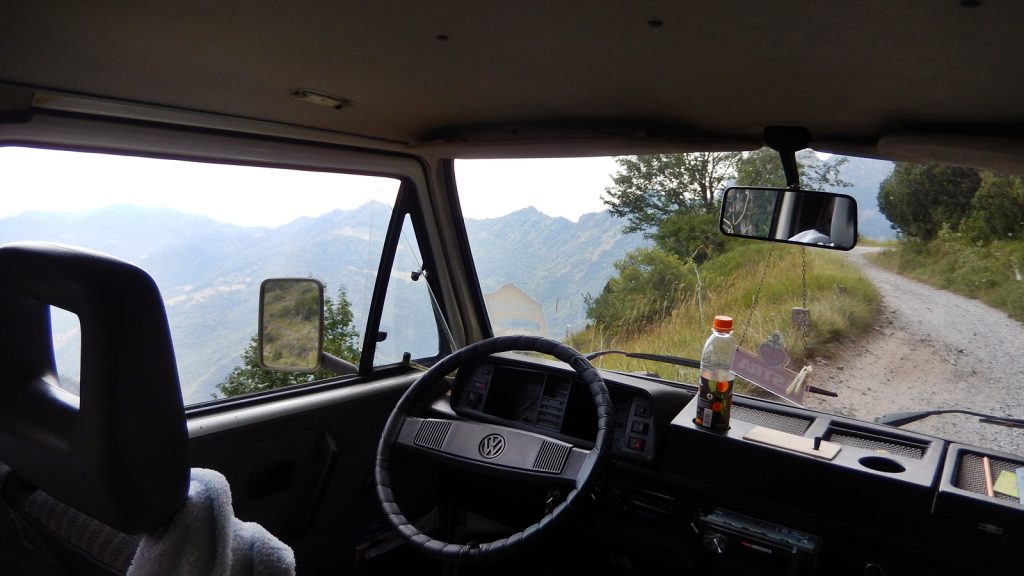 Were there any oncoming traffic, we would be in moderate trouble, but fortunately there is none and both vehicles we have met so far shall be the only two vehicles we will meet during the 2.5 hours on the 20 kilometres long road.

Just before Giogo del Maniva the road becomes paved again. Here the rockslide, which had been blocking the road for several years, must have occurred because the road makes a quite fresh impression on us.

At the intersection with SP345 road there seems to be a small ski area. There are two roadhouses where we get some snacks and drinks before we continue back down along Passo Crocedomini. 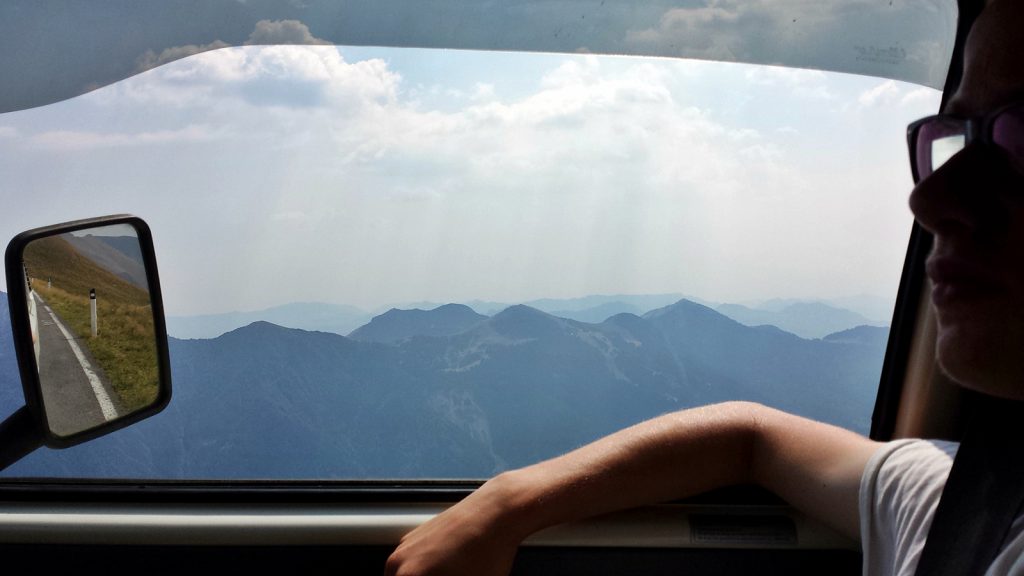 Only flying is better: Passo Crocedomini

Compared to Maniva Pass, Passo Crocedomini is quite well developed and even equipped with some  – rather old – signposts. Our destination is Breno, 29 kilometres away.

Unfortunately the road’s condition deceived. About half way the pavement ends abruptly, and a steep gravel track replaces the road. 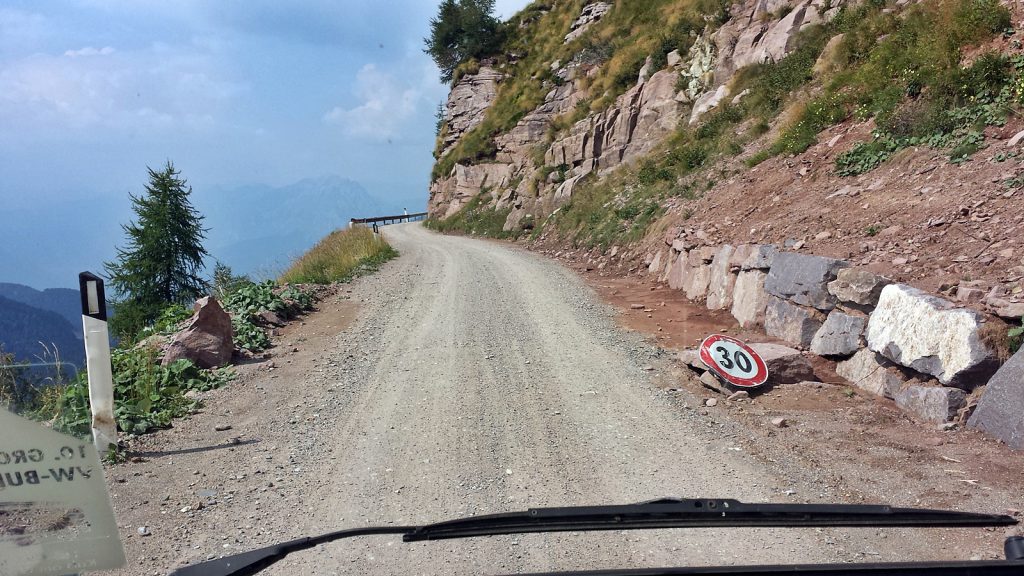 En route we pass a small lake which sits atop a mountain. Strange that it does not empty immediately through a waterfall. 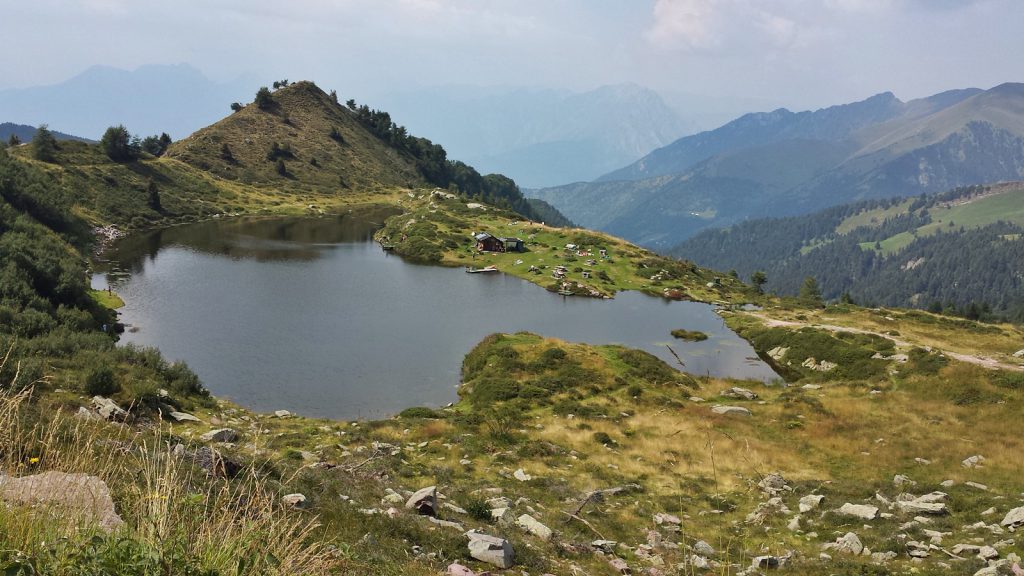 At the end of Crocedomini Pass we befittingly perpetuarte ourselves on the signpost and have a look at some funny carved wooden mushrooms at a souvenir stall, attracting the owner immediately. She seems to smell the big deal and does not stop at all to try and palm her overpriced wooden carvings off on us in Italian. In every shortest breathing space we try to convince her that we would not understand a single word of what she was saying, unfortulately without any success. Thus we just leave her behind and let her countinue to talk, which indeed is not very polite, but otherwise we would probably still stand here tomorrow.

We have been here – Crocedomini Pass

After Breno we try to make up some time. The roughly 50 kilometers over both mountain passes have taken us nearly four hours, thus we take the expressway towards Tirano, from where we will start the ascend onto Bernina Pass. There should be a nice campsite shortly before the summit.

Unfortunately we will not make it there. Half way up Bernina Pass the Didimobile starts making strange, rattling noises from the drive axle. We assume it to be anything related to the transmission and call the ADAC (German automobile club) which sends us a mechanic about an hour later. 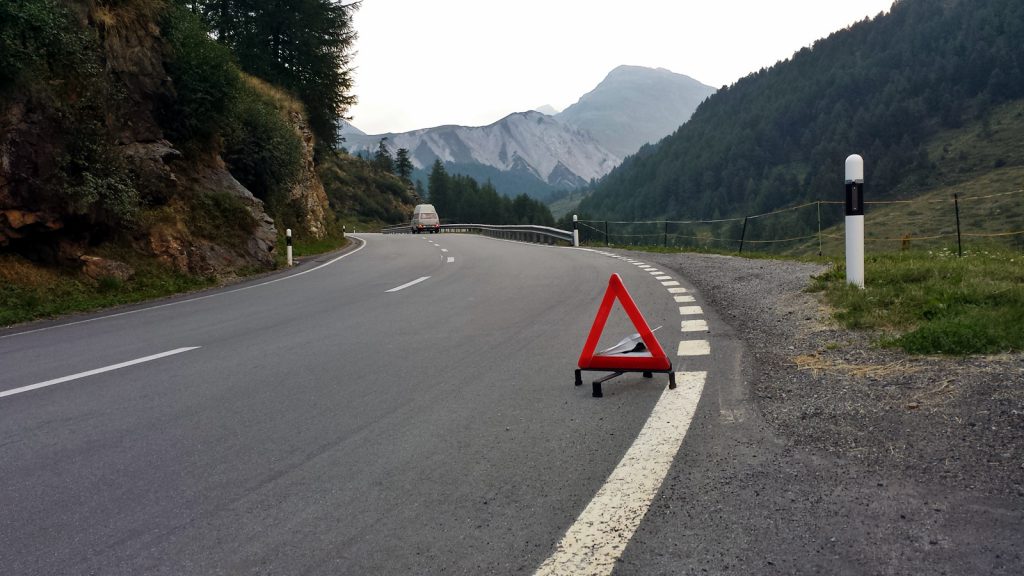 The mechanic bolsters us up and assumes that the problem might only be a dry axle bearing and asks us to follow him to his garage back down at the bottom of the pass. So we are heading down nearly the whole mountain again.

We are allowed to spend the night behind the garage and the mechanic keeps the customer toilets open for us. A really great person this Swiss guy.

So we cook ourselves a soup and go to bed with mixed feelings after a fantastic day so far. Tomorrow morning at eight o’clock the Didimobile is supposed to be inspected and then it will show if the tour is coming to an abrupt end here or if we should still make it to the VW bus convention near Zurich.