What a wet night that was! A place for the night next to a waterfall might be really idyllic, but standing next to a busy motorway can not in the slightest be compared to the noise a waterfall makes. To make matters worse the clouds are hanging low this morning, and the upper part of the waterfall is already completely covered in them. 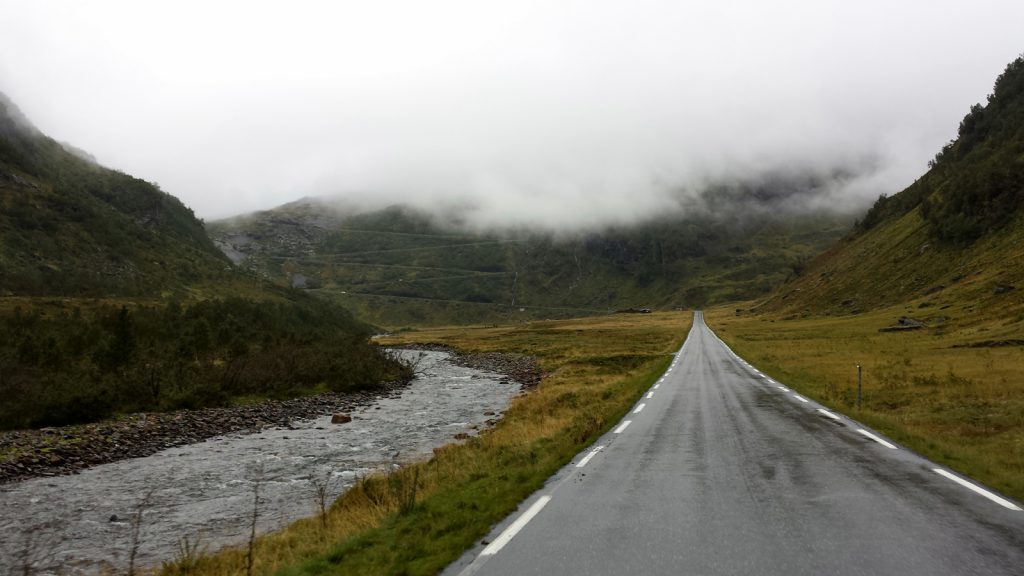 Along RV13 road we leave Voss northbound towards Sognefjord, passing over Myrkdalen and Vikafjell. In Myrkdalen the road spectacularly winds up a scarp slope, making four hairpin turns. On our arrival, the upper end seems to already be up in the clouds.

The road’s vertex lies inside the one kilometer long Storehaugtunnel on Vikafjell, at an altitude of a fair 1,000 meters. Here we witness a fabulous spectacle of clouds rising up from the valley: 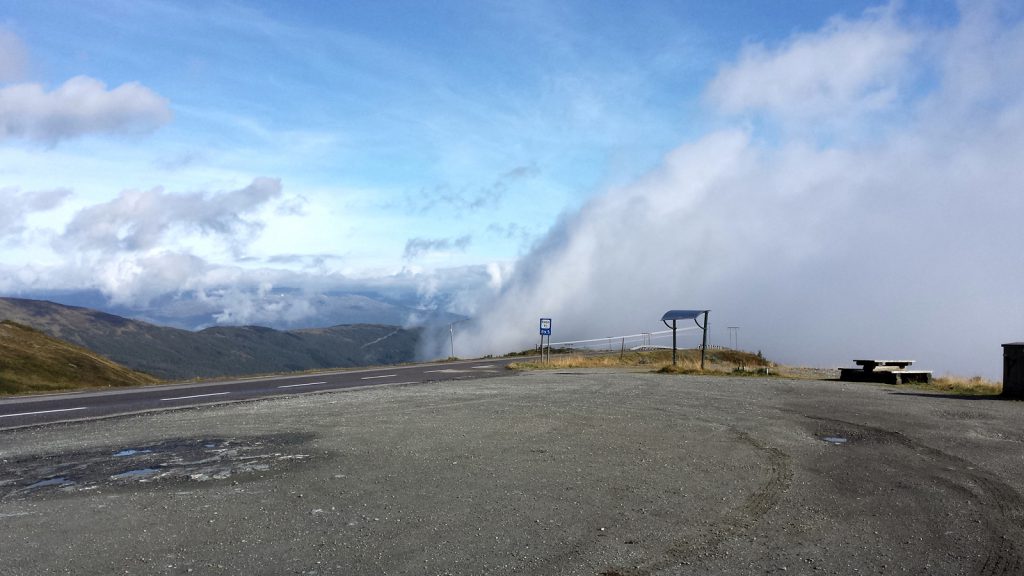 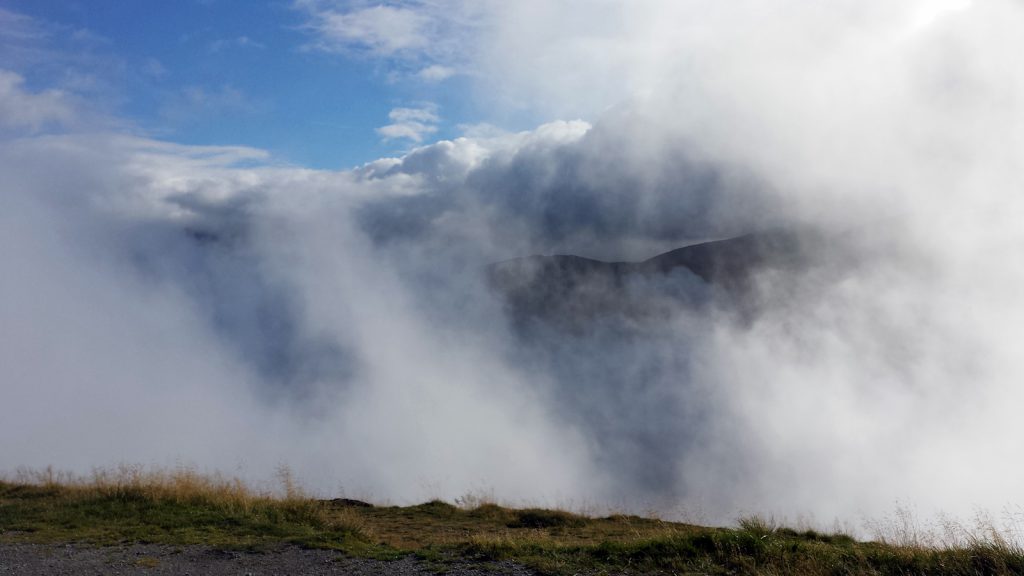 Still above the clouds 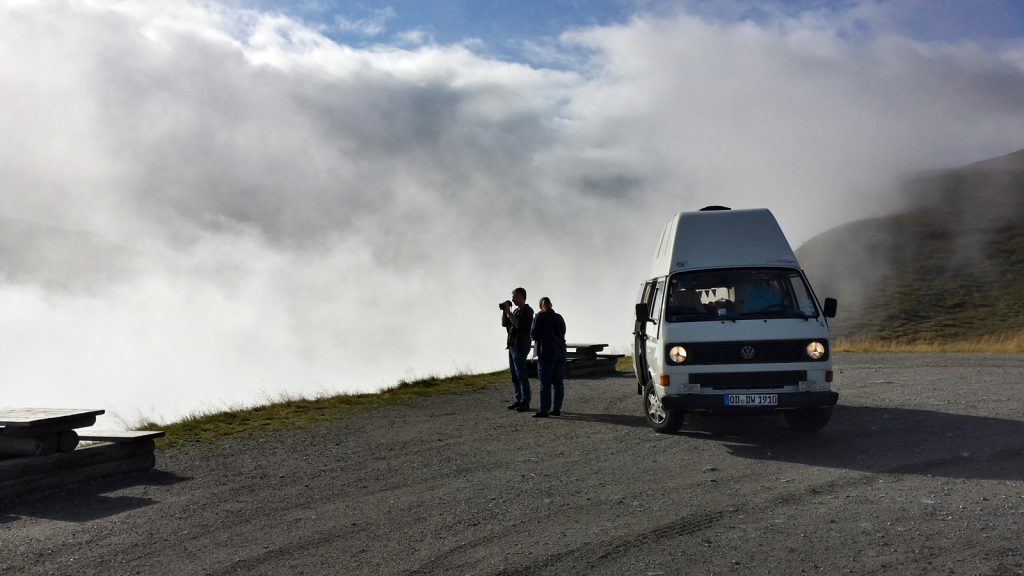 The descent to Vikøyri at Sognefjord features grand views towards the village as well as onto the fjord. With a steady gradient of 8% and only one single hairpin turn, RV13 road proceeds down to sea level as a real scenic road. 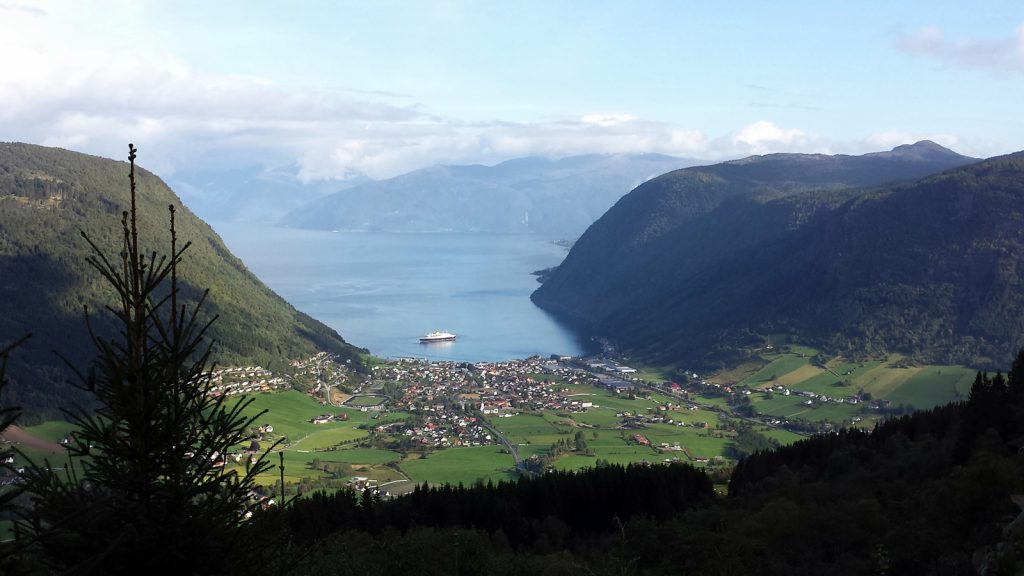 En route there is a small surprise. The other Didimobile which we had met on the ferry from Denmark to Norway two days ago is standing on a small campsite next to the road as we  are driving by. We are honking our horn and happily waving at each other. Normay seems to be really tiny. 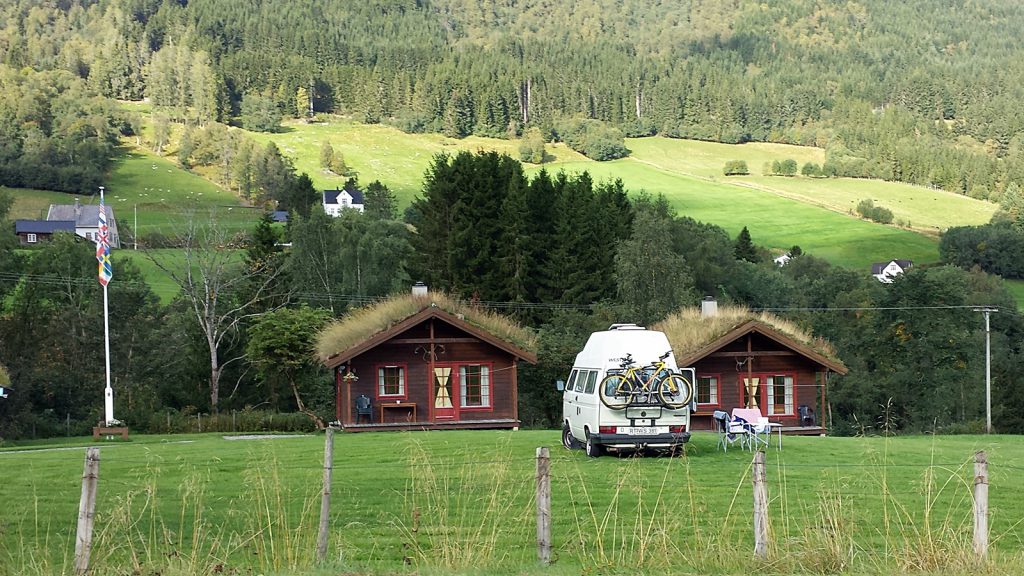 Down in Vikøyri an old cruise vessel is just about to cast off. It somehow reminds me of Titanic even though it is considerably smaller in size and has only got a single, yellow stack. We drive down the coastal road alongside the vessel for some time until the road ends at a ferry terminus. 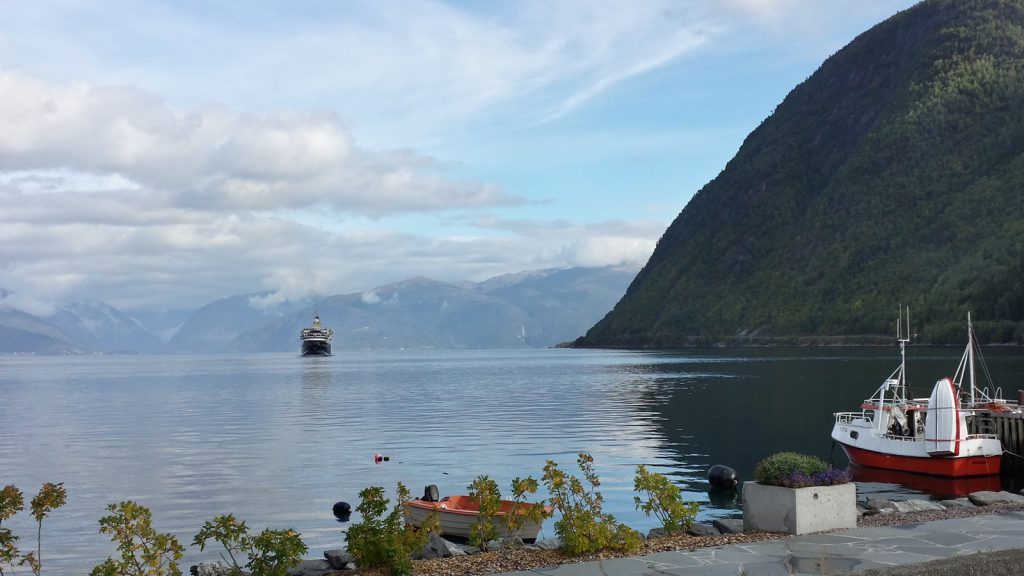 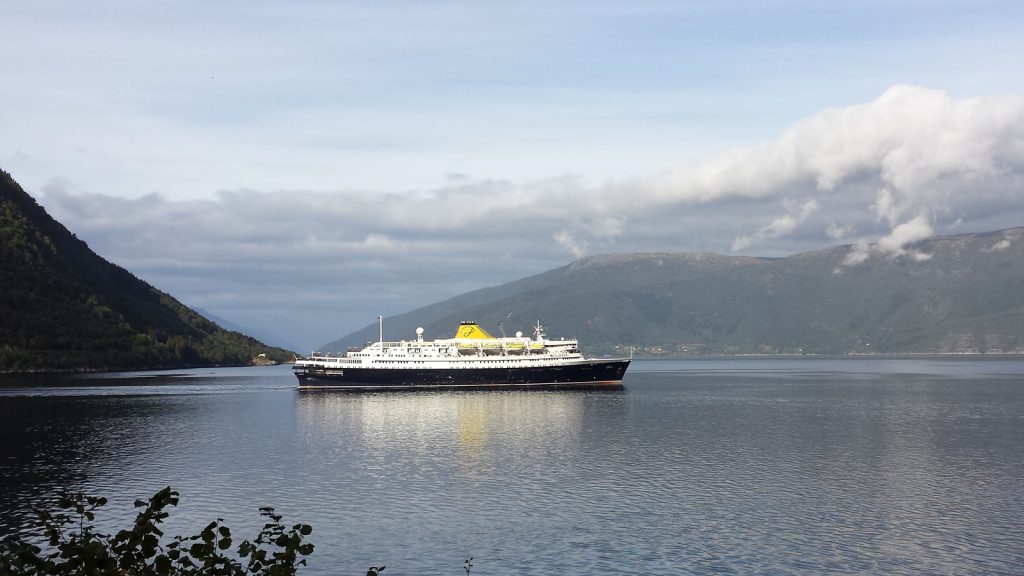 We do a spot landing again: The moment we arrive at the car ferry boarding commences. Behind us there is only a single other vehicle before the hatch is closed and we are ready to depart. This is already the second “perfect timing” on this tour. 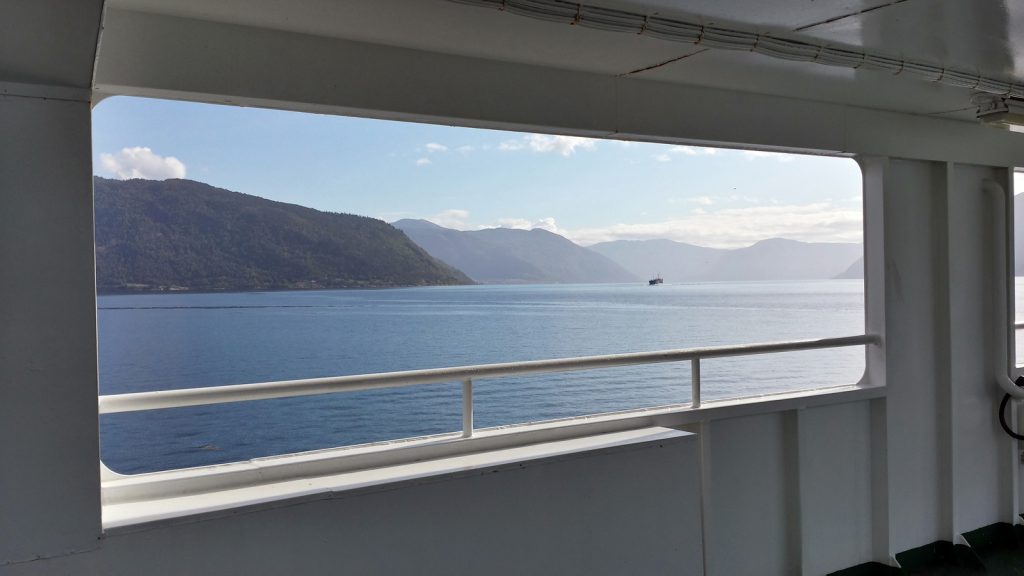 The ferry takes us from Vangsness to Hella in 20 minutes, from where we follow Sognefjord eastwards until Sogndal. Here we turn onto Sognefjellsveien (Sognefjell road, RV55) which we intend to follow up to Lom. An information sign about an old stave church keeps us from following our plans, thus we do a small detour to Solvorn from where another car ferry takes us to Ornes. 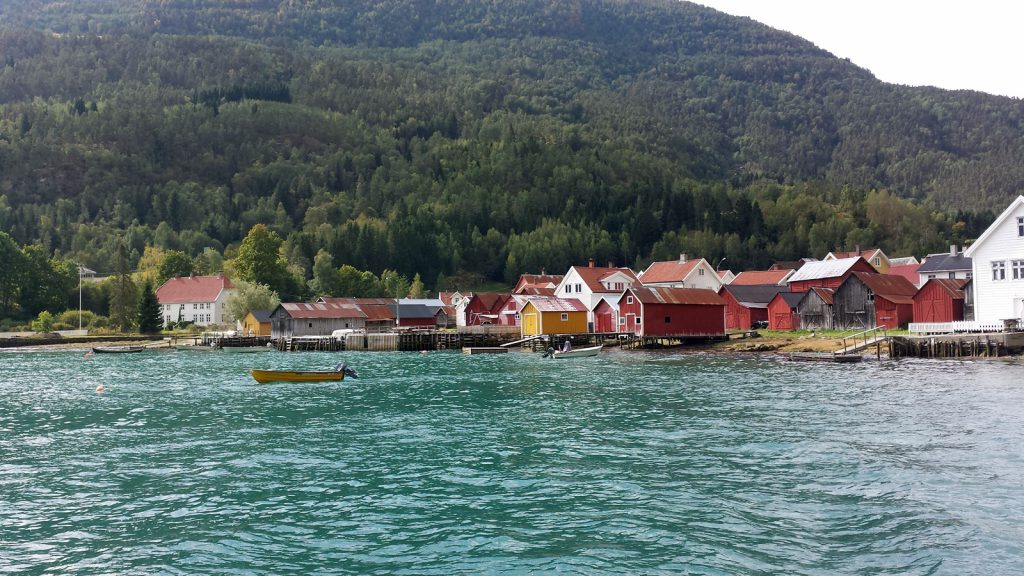 High above the small village of Ornes, Urnes Stave Church becomes visible. Dating back to the 13th century the church is meant to be the world’s oldest stave church and has been part of UNESCO World Heritage since 1979. 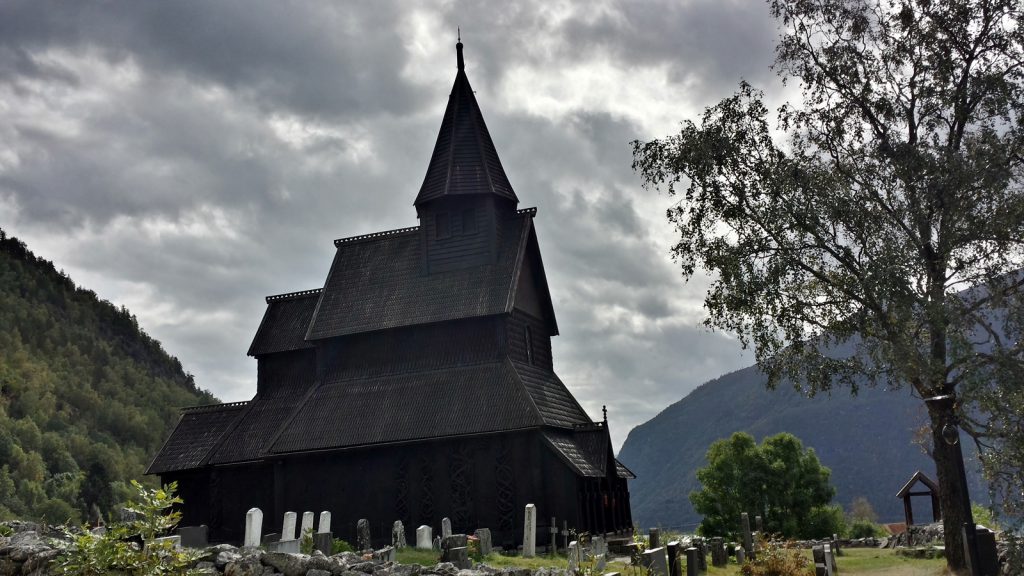 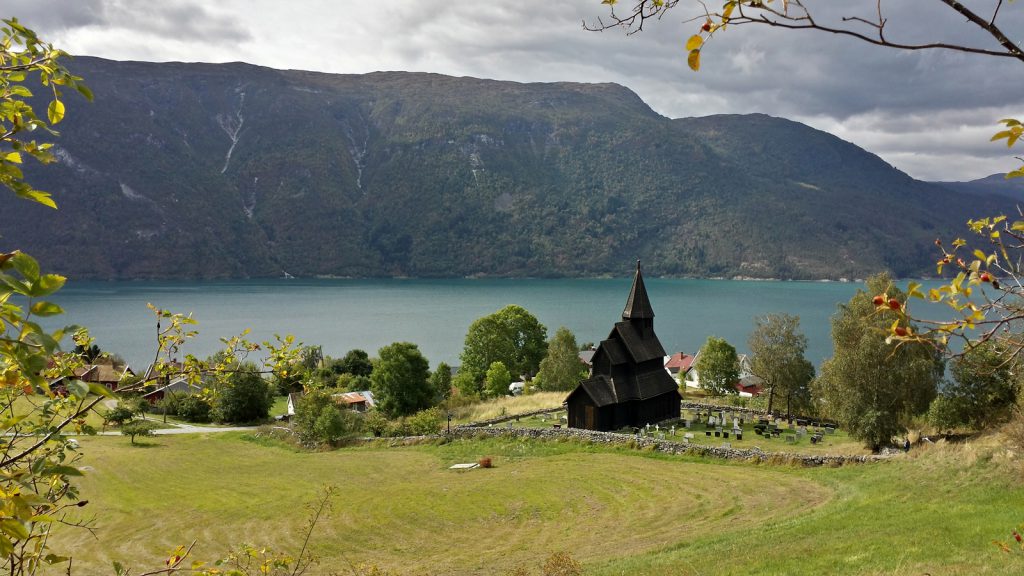 Stave Church, Lusterfjord in the background

We decide against another ferry passage and continue along the small coastal road along Lusterfjord, a branch of Sognefjord. After passing through some unlit, single lane road tunnels we reach Skjolden, where we turn onto RV55 road again. Sognefjellsvejen is Northern Europe’s highest mountain pass with its climax at 1,434 meters above sea level. Thus the Didimobile has to clim a fair ten kilometers up a ten per cent incline in second gear, which it perfectly does without any problems. 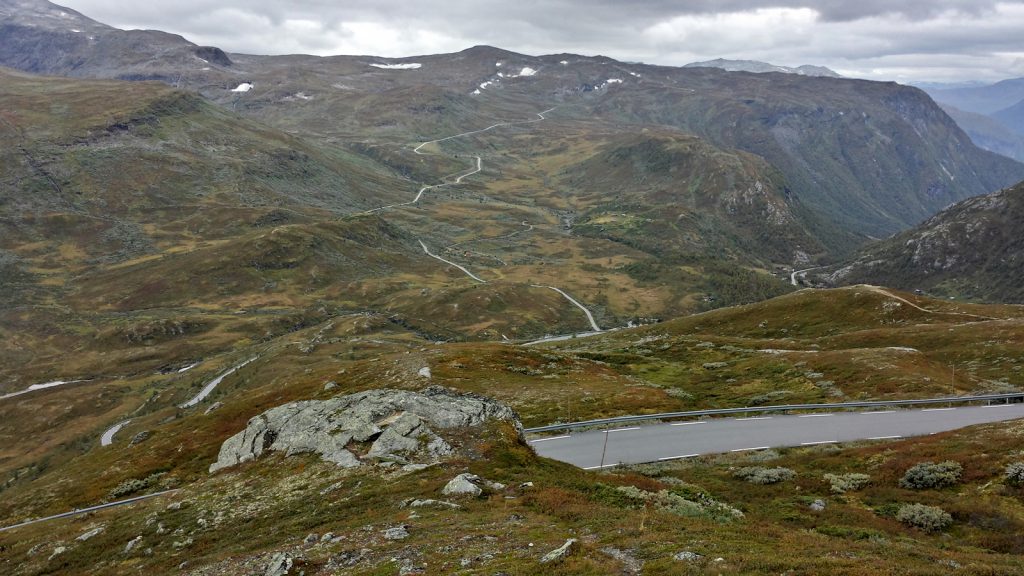 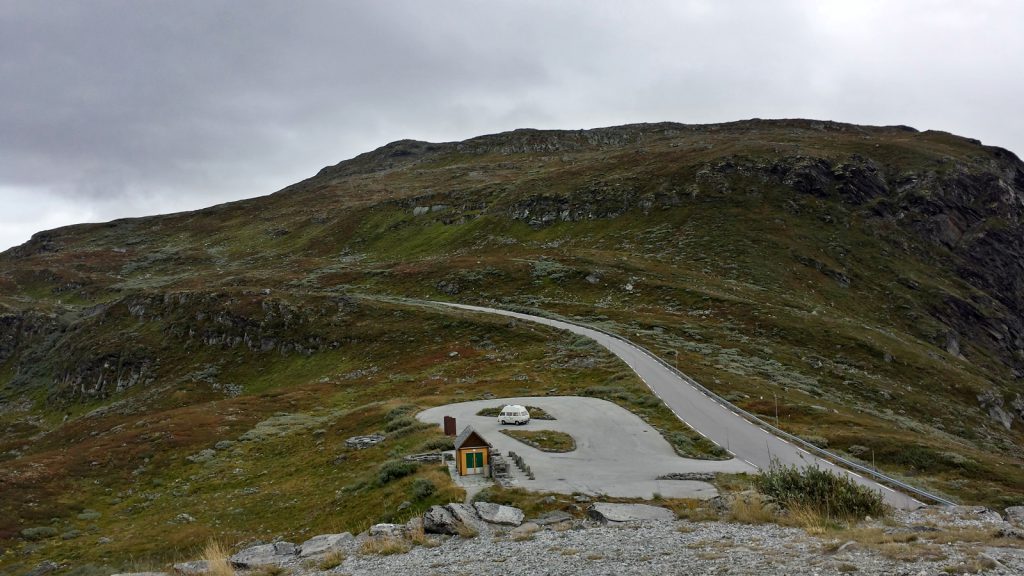 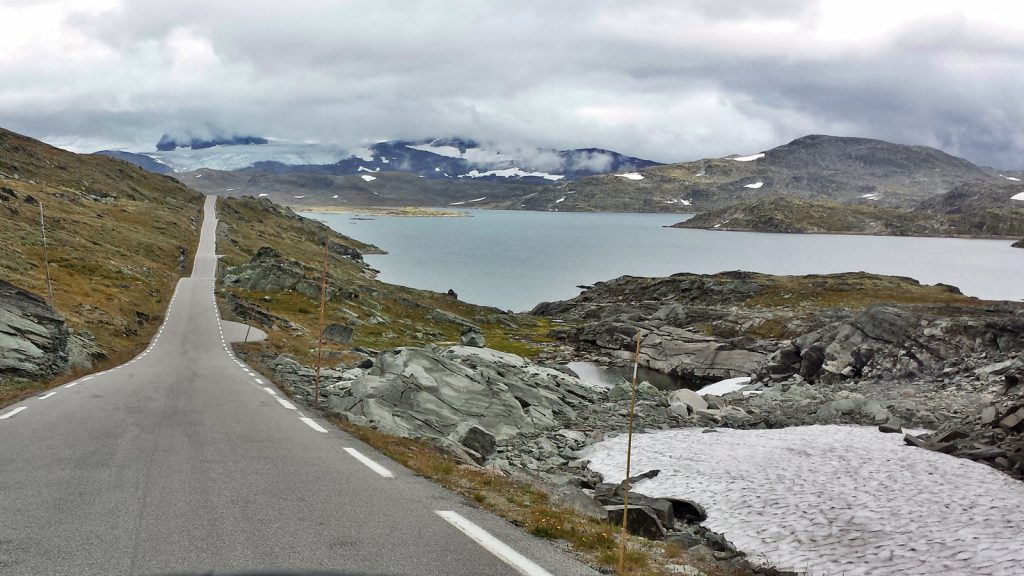 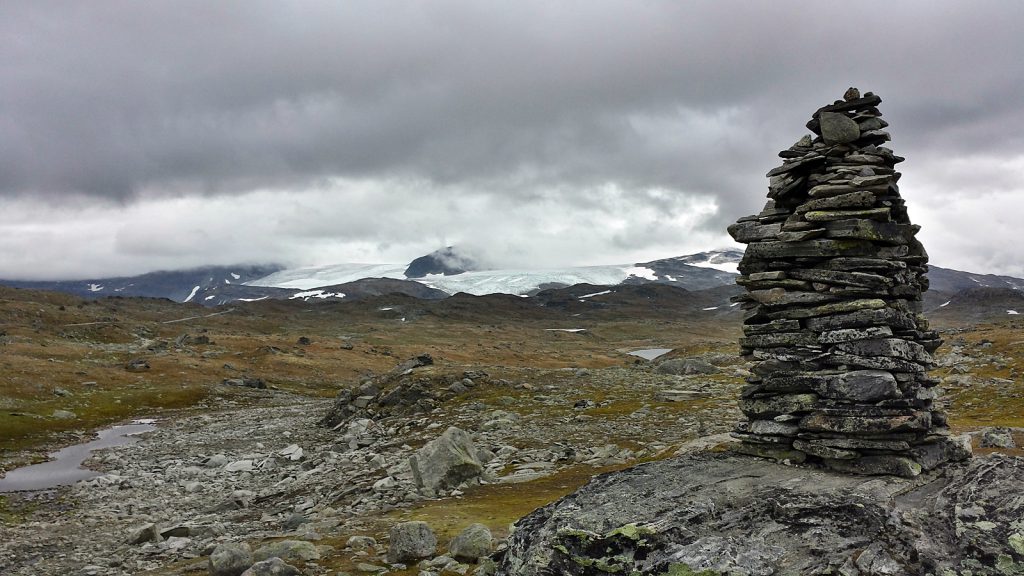 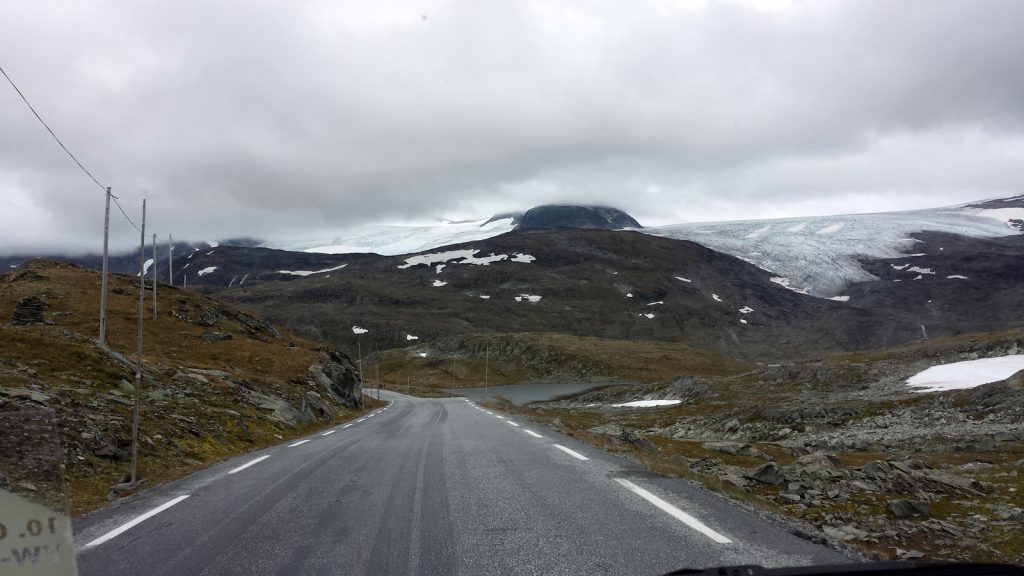 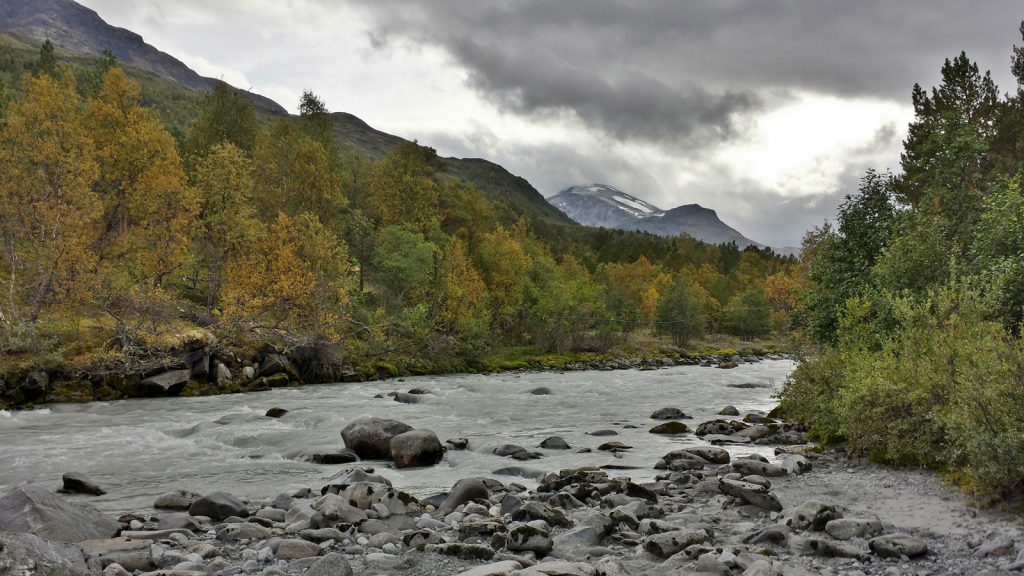 On its way the Sognefjellsvejen road crosses the highlands of Sognefjell and forms the border to Jotunheimen National Park.

Situated at the end of RV55 road in Lom is another stave church worth visiting. We spend some time there before starting to look for a place for the night. Near the small town of Otta we find a small cosy campsite. 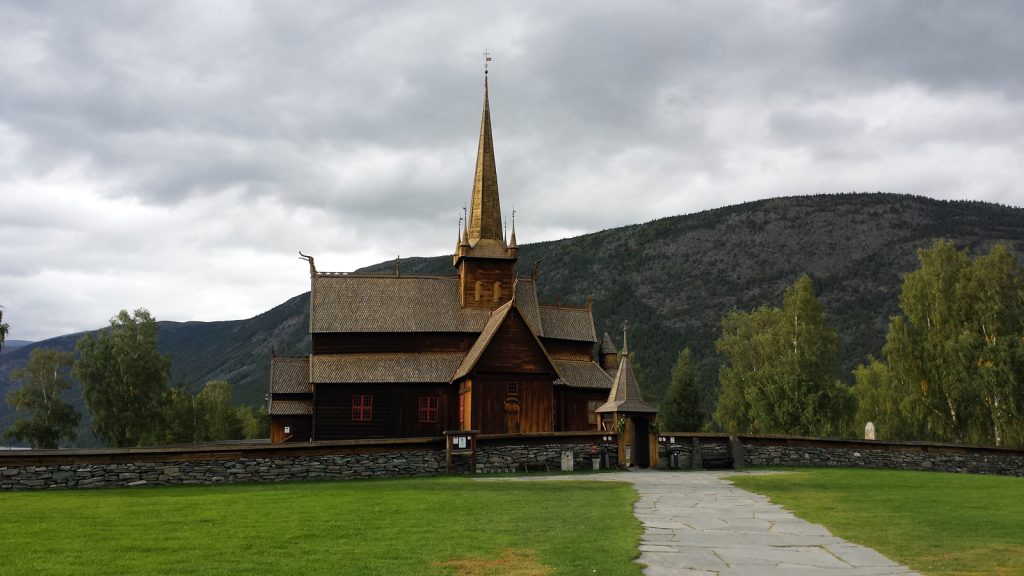 Today’s conclusion: Nearly 350 kilometers in 12 hours, making an average of 29 kph. Still way to slow to make it in time to Luleå. But Didi is sure to be able to make up this time in Sweden without any problems. 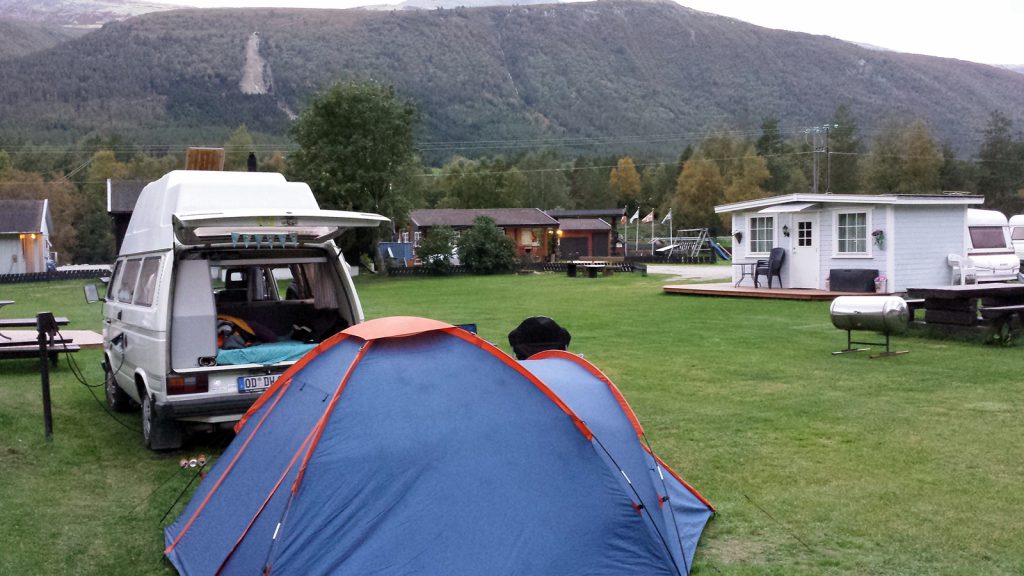