That was a cold night. At 3.7°C inside the Didimobile getting up is not hard when you realize that the heating is only going to work while you are driving. So we have a quick shower and a hot coffee in the adjacent hotel before setting off for a new leg. 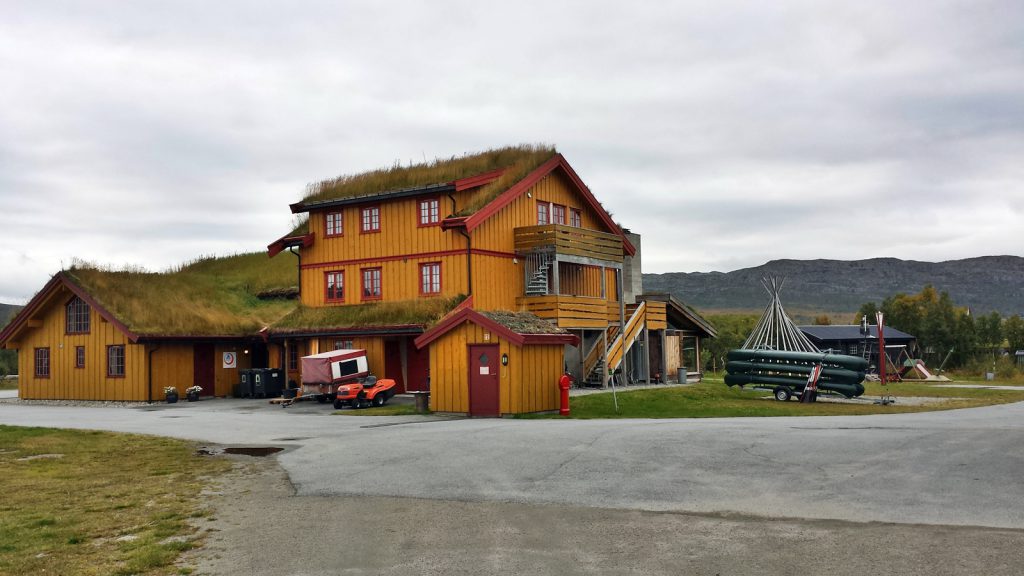 First stop is Haukeli at the end of the number 9 road, which was named Haukeligrend until 1999. Here we refresh our foods and beverages in a tiny supermarket and continue our tour along European route E134 towards the Northwest. 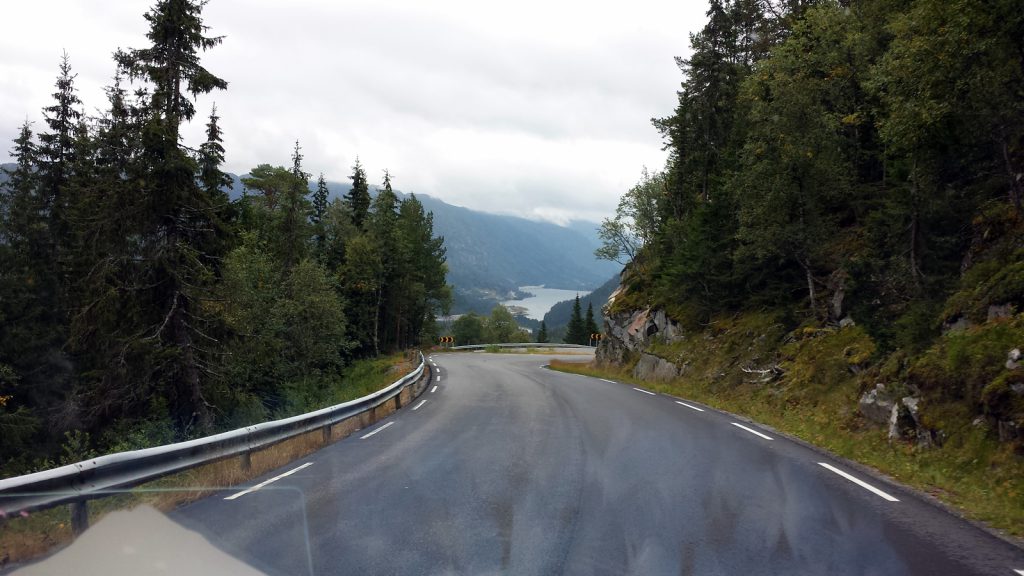 Several old mountain passes along E134 have recently been replaced by tunnels, making traffic faster, safer and more reliable in winter. The old mountain passes however are still open to the public but have hardly any traffic on them, so we chose this wonderful alternative and omit the tunnels.

Bypassing the tunnels on E134 road.

At Vågslidtunnel the old mountain pass runs along Lake Kjelavatn where we have an extensive breakfast break. During this half an hour not a single car is coming along.

Just being back on the light traffic E134 we are soon confronted with a couple of wrong-way drivers or, better said, wrong-way walkers. A hord of goats uses the road as a hiking trail, seemingly undisturbed by the few cars  driving here. 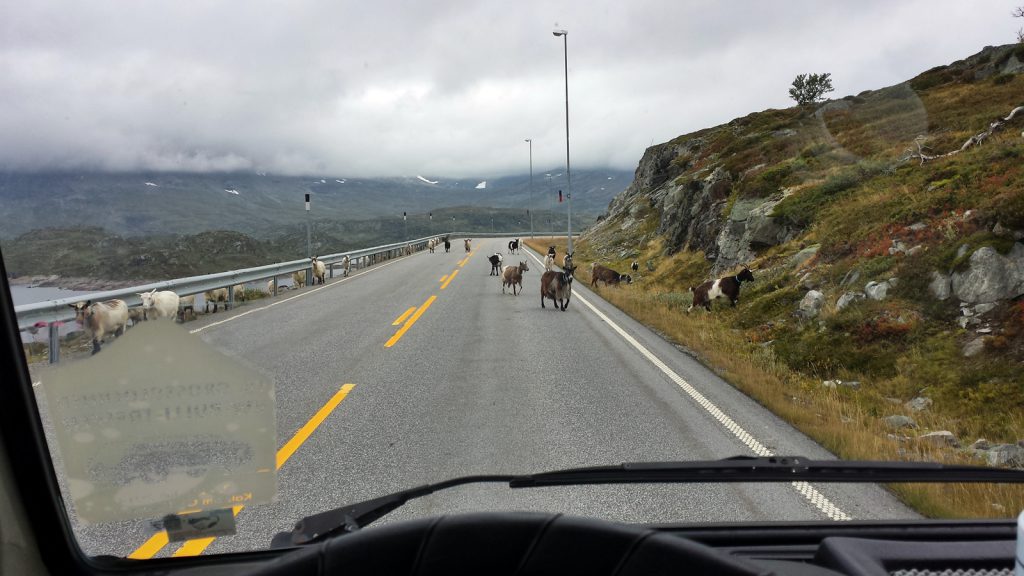 The longest tunnel along E134 road is the Haukelitunnelen at a length of 5,682 meters. Until its completion in 1968 an old mountain pass, which had to be freqnetly closed during winter months, had been the only possibility to cross the Haukelifjell. Today you are all on your own when using this wonderful road over the elevated plain. 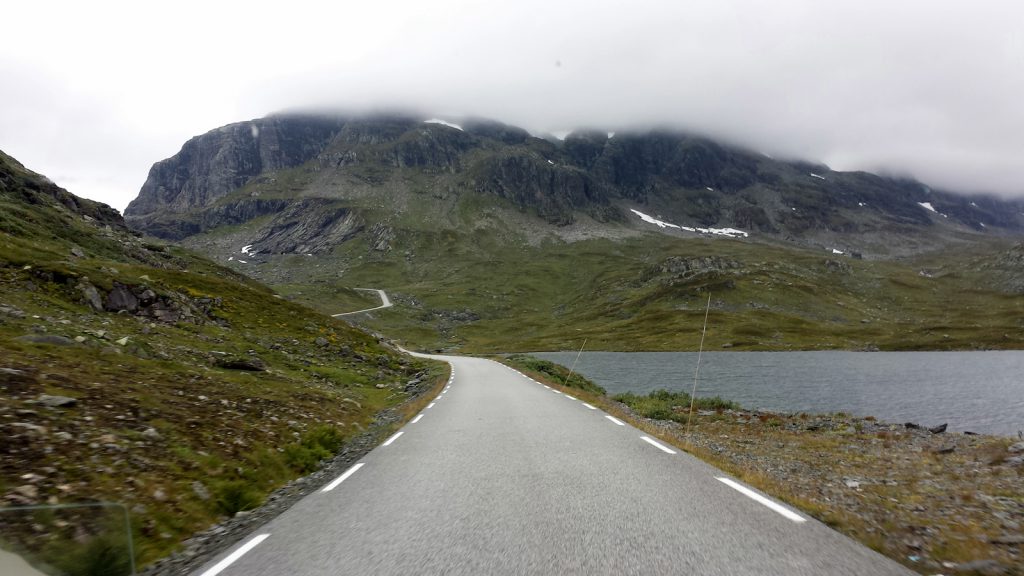 Behind every bend and after every tunnel Norway’s landscape seems to change. Near Røldal the European route E134 leads down to Røldalsvatnet, a seven square kilometers wide lake. Shortly afterwards near the village of Håra we leave E134 road and turn northbound onto Reichsroad 13 (RV13).

Soon another tunnel, the 4.5 kilometer long Røldalstunnelen, appears along RV13 road which again incites us to circumnavigate it. The road is narrow and steep, but rewards us with stunning landscapes. 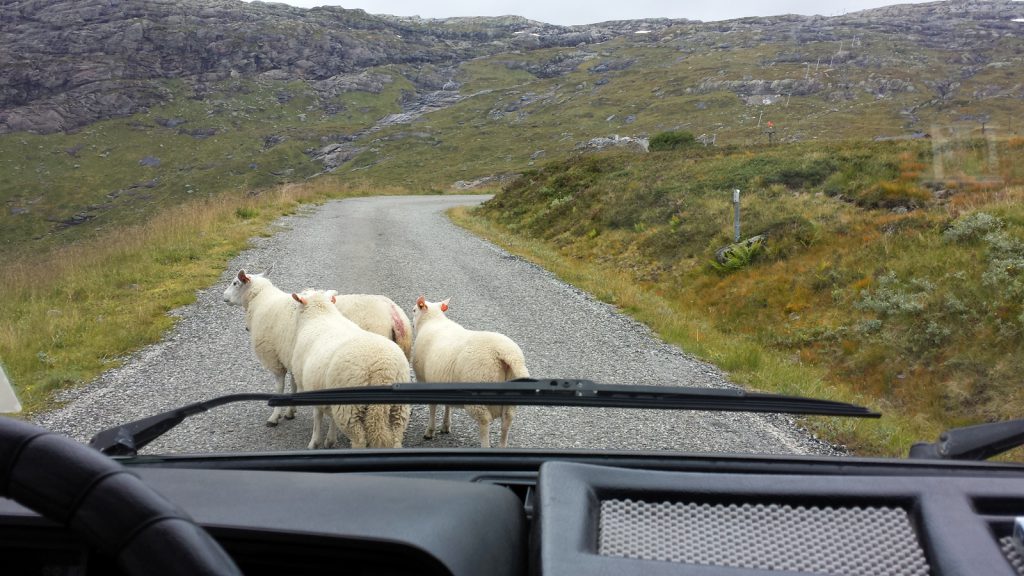 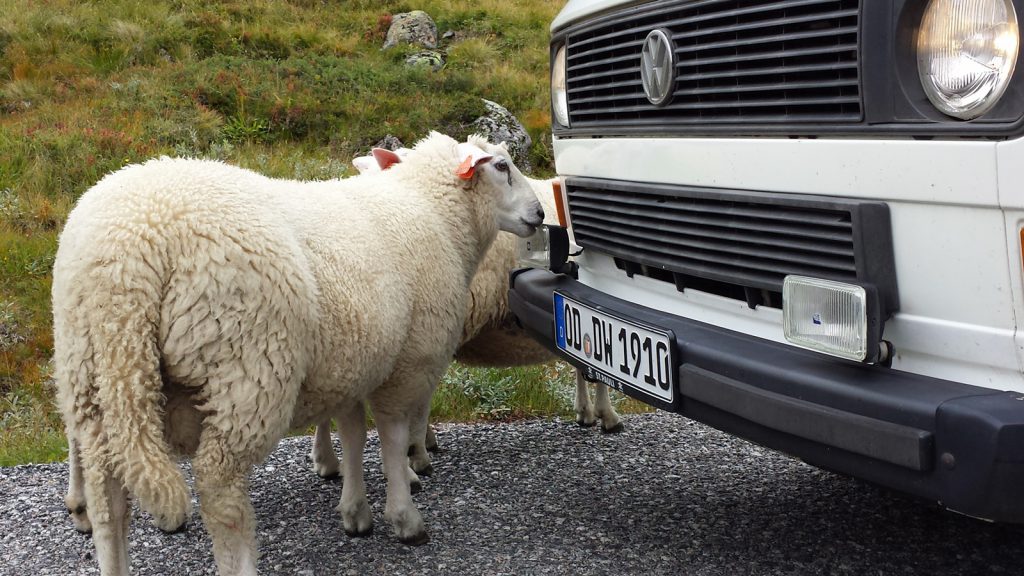 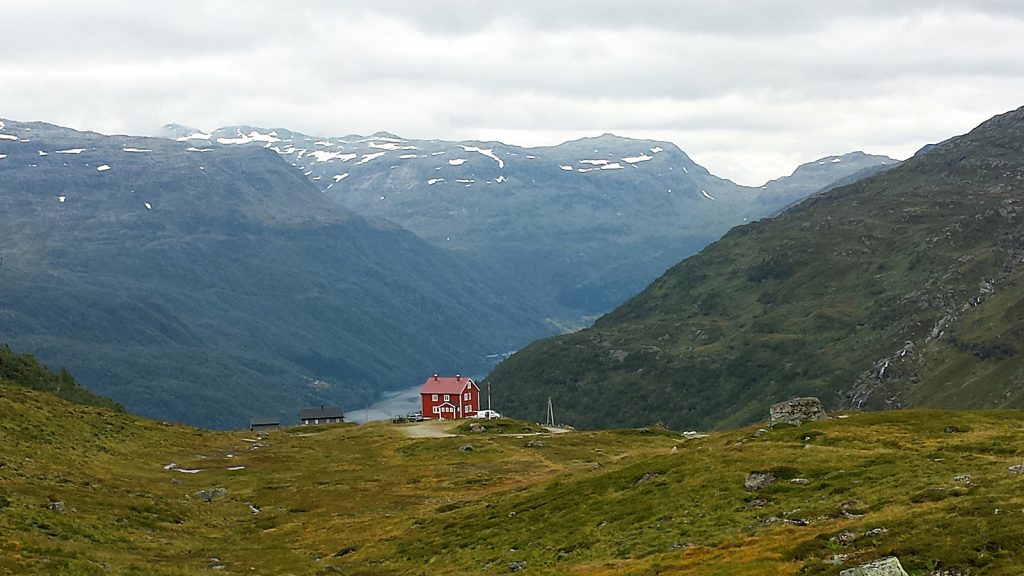 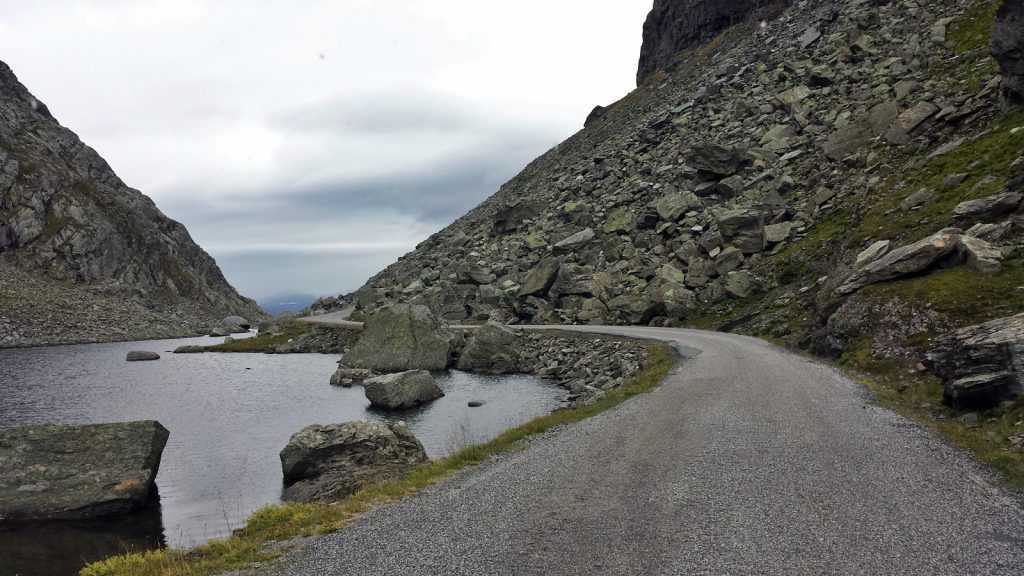 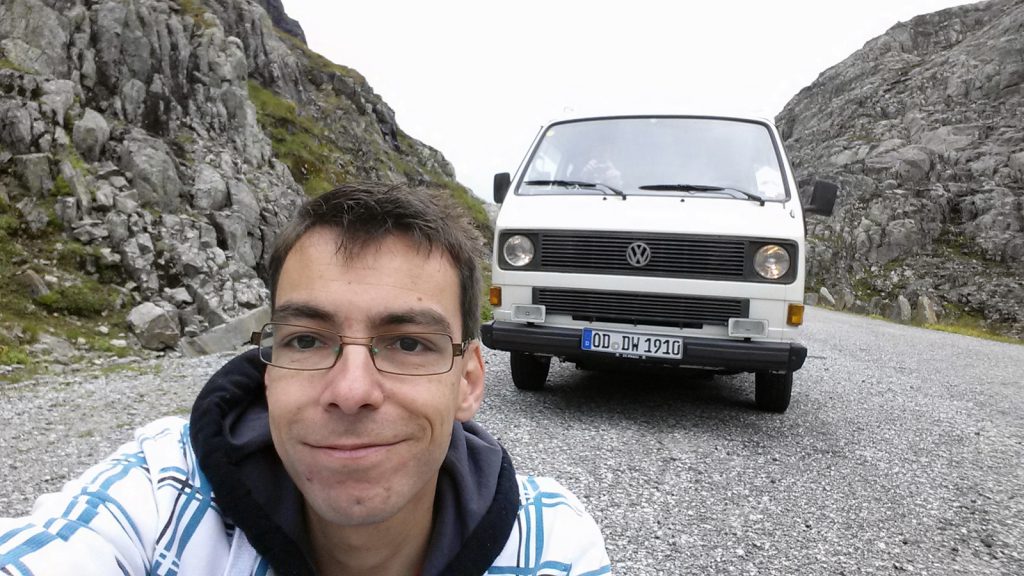 Where has my high hard top roof gone? 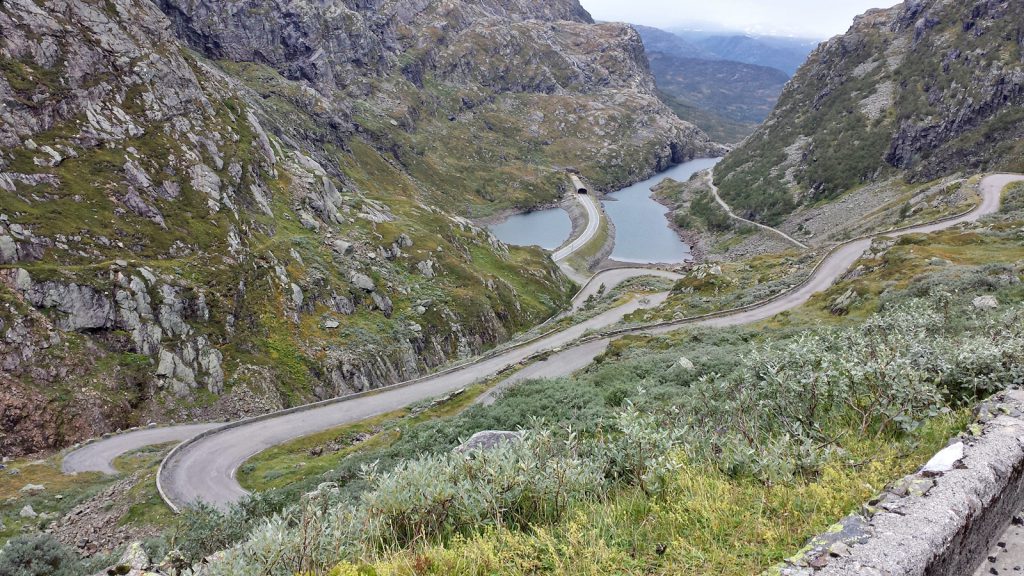 Below the Røldalstunnel, to the right the old mountain road

We have already been on the road for four hours now, but the speedometer only shows a hundred kilometers. When we keep this pace it might become difficult to reach our dates near the Arctic Circle.

Further north we come along Låtefossen, one of Norway’s most famous waterfalls. Actually Låtefossen is two waterfalls merging into a single one on the way 165 meters down the rocks. At the bottom it passes under the old road bridge which consists of six stone arches, carrying the RV13 road on top. Depending on the weather, passing cars might get a free car wash when crossing over the bridge. 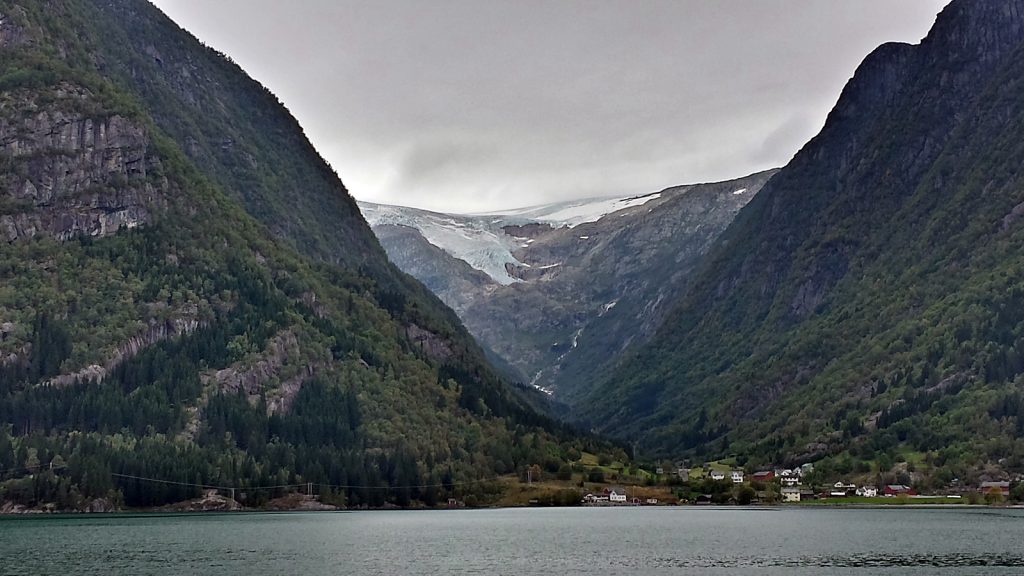 We continue our journey. Shortly before Odda the Folgefonna Glacier, Norway’s third largest glacier occupying an area of 214 square kilometers, becomes visible to our left. 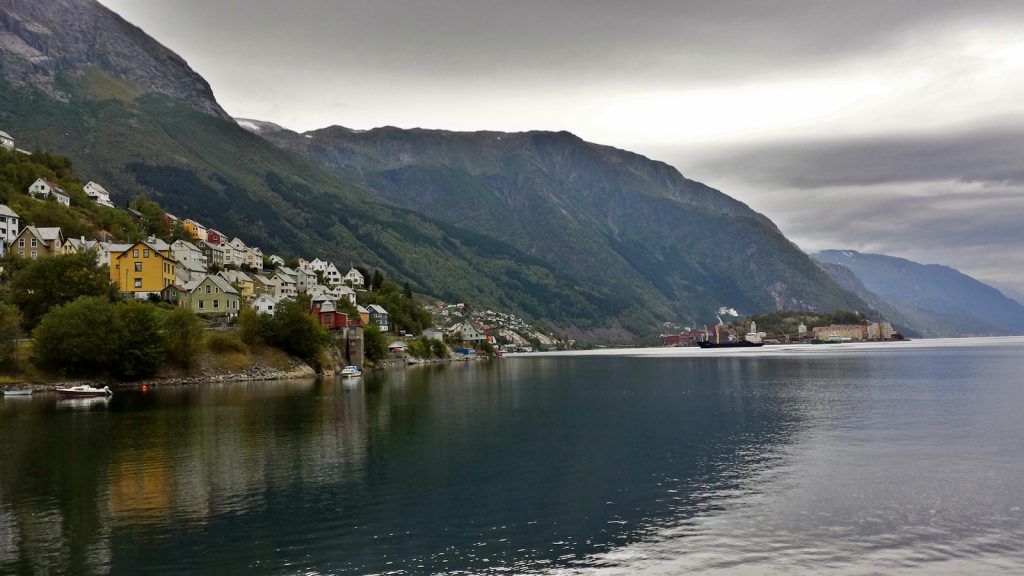 Ferries belong to Norway as do salmon and red wooden houses. Utne is a 50 kilometer drive, the ferry timetable shows a departure in an hour. So we take the lefthand route only to realize that Norwegian roads are only drivable kind of slowly, even without doing any sightseeing. Thus instead of having an eye on nature we try to drive a bit faster than we normally would and reach Utne just in time for the ferry, which we could directly drive onto. Once on board, it immediately left for Kvanndal. 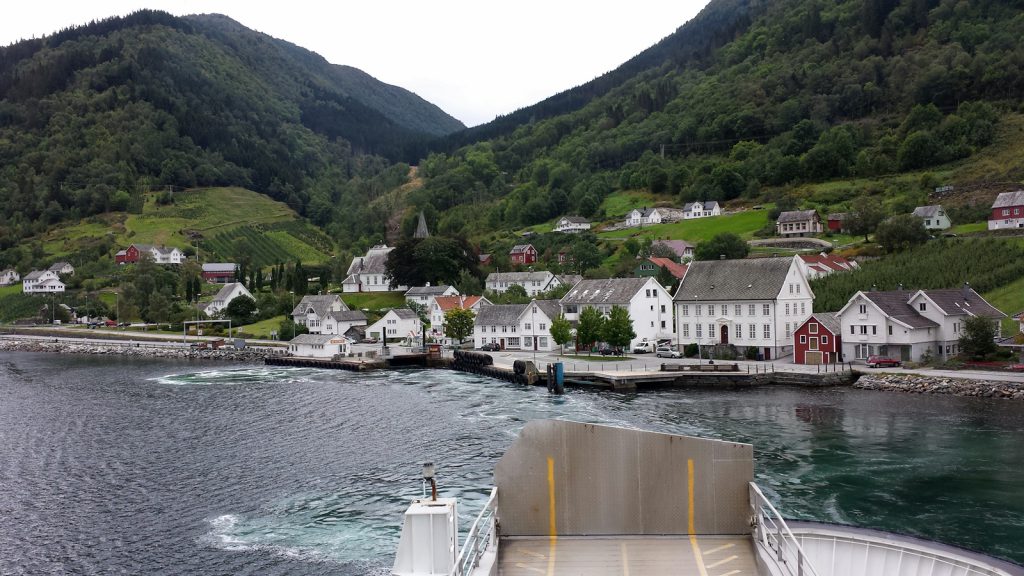 During the half hour crossing we have time to relax and make up our minds about where we might spend the night. We chose a campsite near Voss, situated directly next to Tvindefossen waterfall. 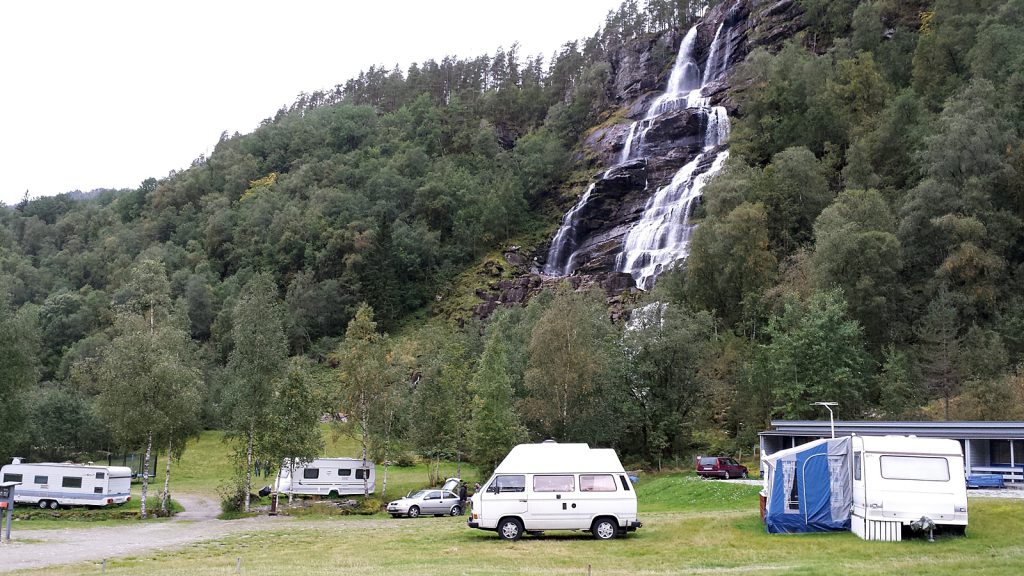 We skip the hike to the peak of the waterfall since it again starts to rain. However we do not want to do without our barbeque, so we grab our IKEA parasol (it cost 1.99€ and is made of plastic) and use it as an umbrella so we can prepare our dinner.

It’s all about improvisation

At the end of the day we’ve made 224 kilometers in nine hours, resulting in an average speed of even below 25km/h. If we continue at this speed we will make it to Luleå two to three days after the game takes place.