What does a hockey fan with a fear of flying do when his team participates in the Hockey Champions League (CHL) in remote Lapland, 1,600 kilometers away from home? Right, he grabs three other fellow hockey fans and his VW campervan and drives all the way up there. But one after another:

The German DEL hockey Team Hamburg Freezers had qualified for the newly created Champions Hockey League by becoming first of the league at the end of the 2013/14 season. By drawing lots, the Hamburg Freezers were chosen to play versus Luleå HF from Northern Sweden, Lukko Rauma from Finland and the Nottingham Panthers from England.

Hockey fans are somehow positively crazy in many aspects, and that’s how joking on a fan convention in summer turned out to become a proposition screeming to be turned into reality: We’re going on an international tour.

Plans were as follows: On the weekend 29th/30th of August 2014 the Hamburg Freezers took part in the Bryggeriet Vestfyen Cup in Odense, Denmark, which lies on the direct way towards the north. The following Friday there was the CHL game in Luleå and two days later, on Sunday, the CHL game in Rauma, so there was enough time to travel from Denmark to Northern Sweden/Lapland, and two days for the 1,000 kilometers from Luleå to Rauma should be managable for the Didimobile as well.

A route was found quickly: From Denmark via Norway to Northern Sweden, continuing along the coastal road to Rauma and finally back from Finland to Stockholm by ferry and via Sjælland home again to Hamburg. 13 days, that’s the most days we could get off work.

Shortly before starting on a 5,000 kilometer journey a bit of buzzle starts spreading: Who is bringing along what kind of foods? How much luggage can four people take along in a T25? Should there rather be only two people sleeping in the van and two others in a tent, have we packed the ferry tickets, a travel guide, maps? I need a pee!

At 15.00 it is time to start. The Didimobile picks up all passengers one after the other and at 16.00 we are on the Autobahn heading north. It is a tight schedule since the first hockey game is set to commence at 20.00 in Odense, some 300 kilometers away. 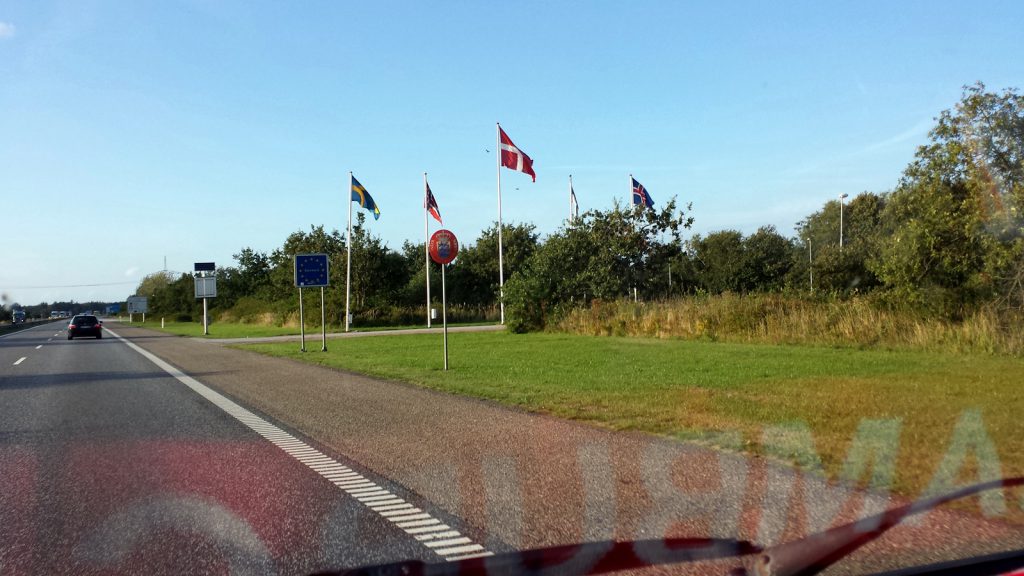 At about half past six we are crossing the border to Denmark, shortly after 8pm we arrive at the Odense campsite. Luckily, the Zamboni (ice refurbisher) in the local ice rink has broken down, so face-off will be delayed for some time. So we hurry to put the Didimobile onto its space, put up the tent and call a taxi without any knowledge of the Danish language. And indeed, we are arriving at Vestfynen Arena just in time for face-off.

Saturday is completely dedicated to ice hockey. We talk, drink, cheer, party, drink more, swear at the others, love the others again and in the end all is just an enormous hockey party.

The Early Bird or: Norway, Here We Come!

5:30, what an unearthly hour to be woken up rudely by one’s alarm clock. It is still dark and misty outside and the air is humid, but at half past eleven our ferry is going to leave Hirtshals. Should we miss that, we could cancel our journey at this point. Six hours for 350 kilometers should be a feasable time for the Didimobile though. 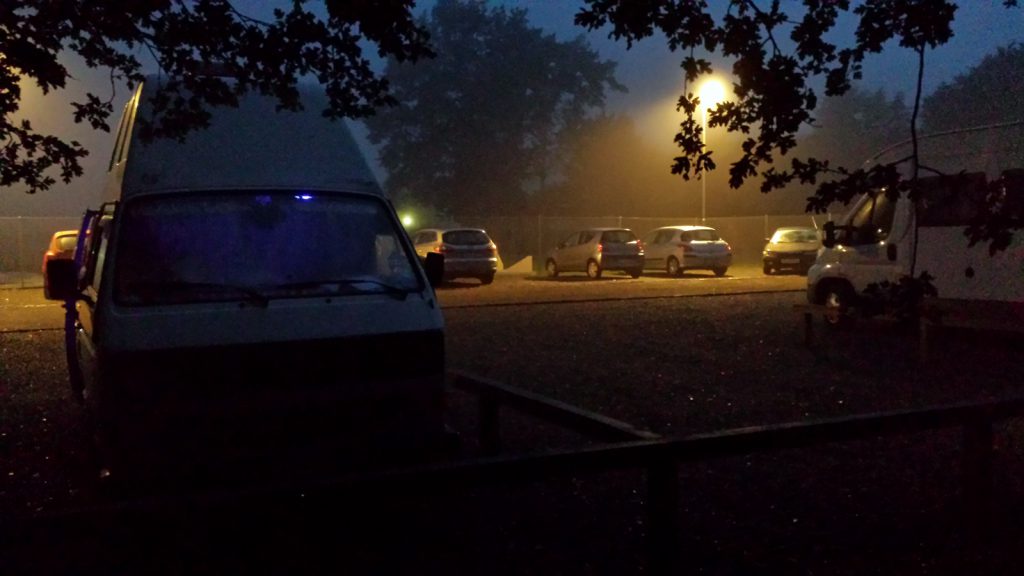 Denmark, half past five in the morning

Yesterday evening we had already placed the Didimobile in front of the campsite’s barriers since they only open at 7am and we have to leave an hour early. We left the tent on its original space so we have to carry it the 200 meters to our campervan and stowe it there this morning. 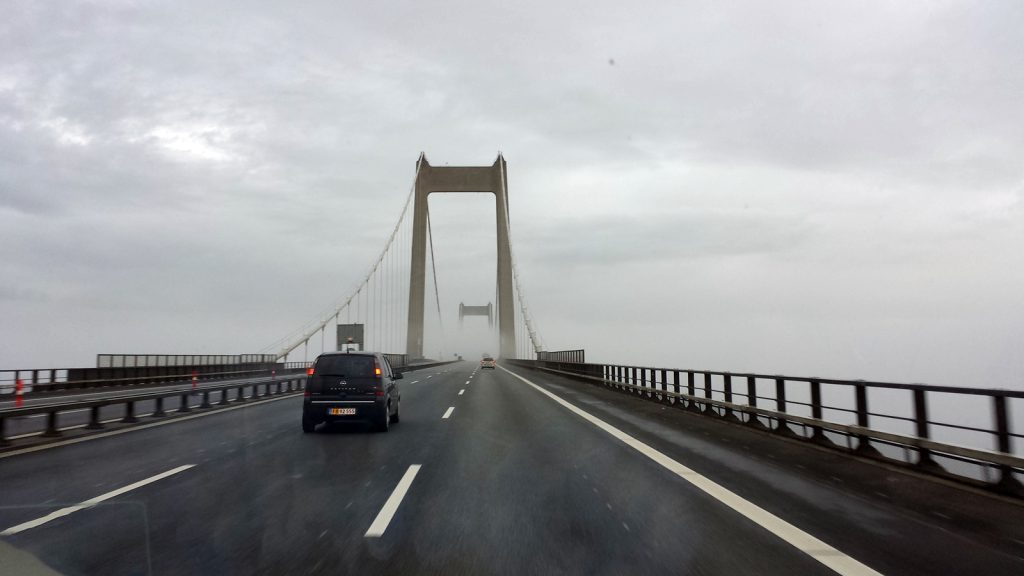 We are on the road again, further to the north. Slowly the morning fog is lifting. Driving on the empty Danish motorway is pleasant and my three fellow passengers soon fall asleep again. At around half past ten we arrive at Hirtshals harbour where we fill up the Didimobile to the brim with Diesel because Danish petrol prices are more than fair compared to Norwegian ones. 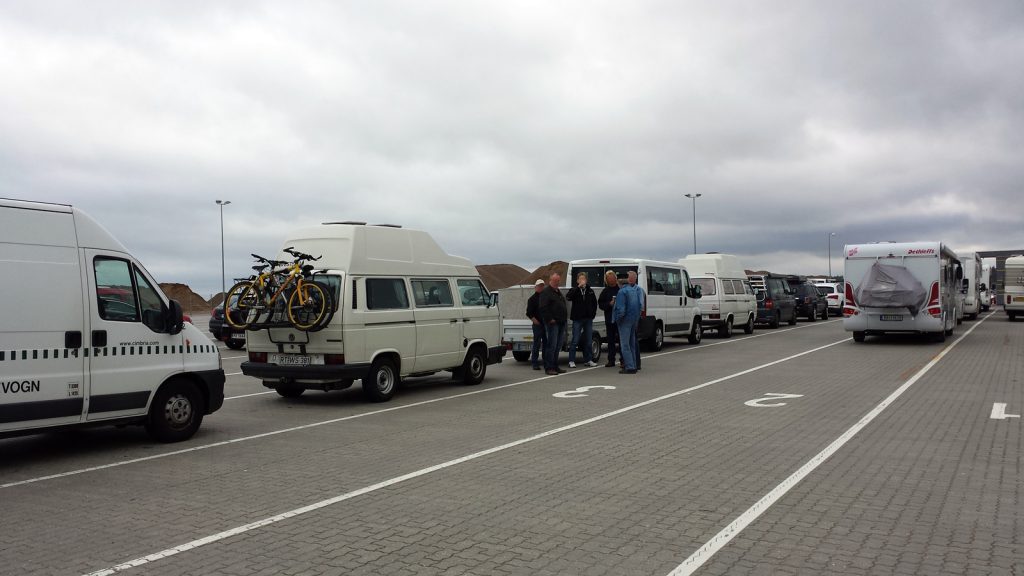 Another Didimobile waiting for the Hirtshals to Kristiansand ferry

Check-In is easy going, the waiting room consists of a heated container with two benches and a coffee machine inside. When boarding begins at 11am we are suddenly standing in front of the wrong car. Another Didimobile is waiting two cars behind us, white and with a high hard top roof, just like the real Didimobile. As luck will have it we shall meet once again later on. 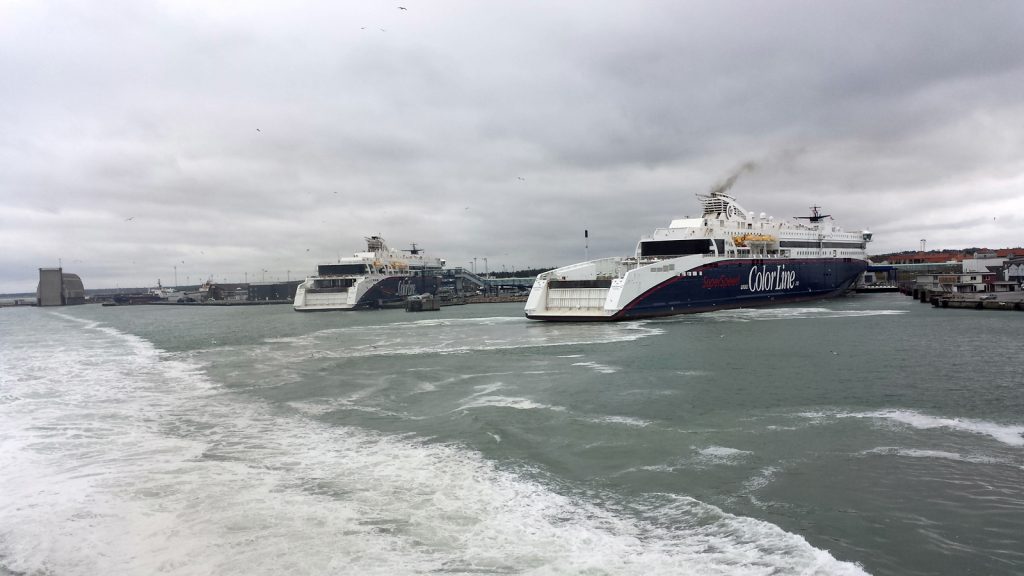 The Hirtshals – Kristiansand ferry itself is a modern speedferry, therefore travel time for the 120 kilometers between Hirtshals and Kristiansand is only barely two hours. The ferry’s interior looks more like an oversize airplane but with a caféteria and a duty free shop on board. 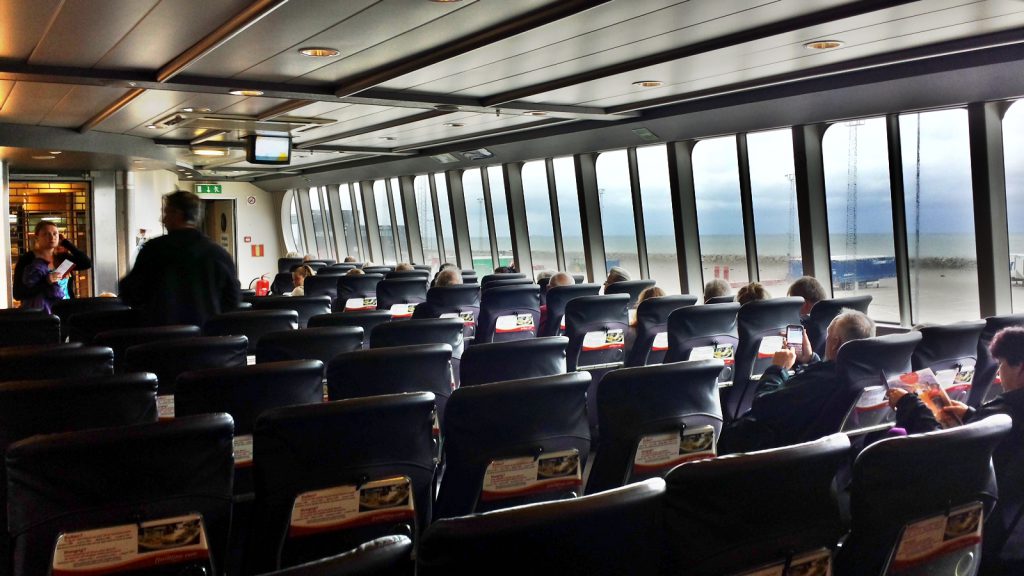 Like in an airplane: The Kristiansand – Hirtshals ferry’s interior

The weather does not want to become much better. The closer we come to the Norwegian coastline, the darker it gets, and just in time for our arrival it starts raining cats and dogs. As true Hamburg people we are used to a weather like this and do not become discouraged. Excellent Norwegian country roads lead us further north from Kristiansand, always following the number 9 road. 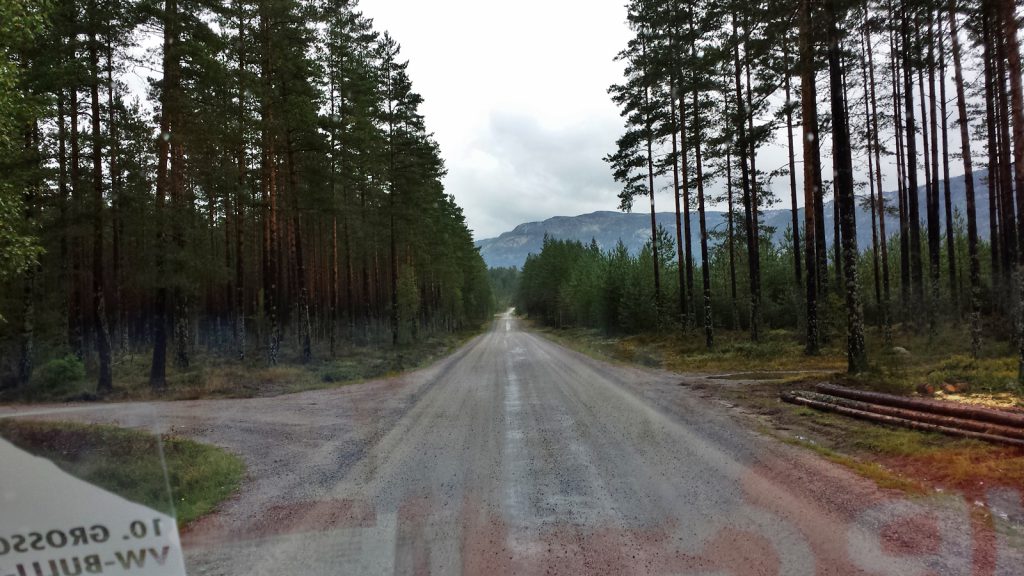 Norwegian road off the beaten track

At Reiårsfossen, an impresive waterfall, we are having one of many short breaks. Behind every corner in Norway there are lurking landscapes way to fascinating as to only quickly pass along. 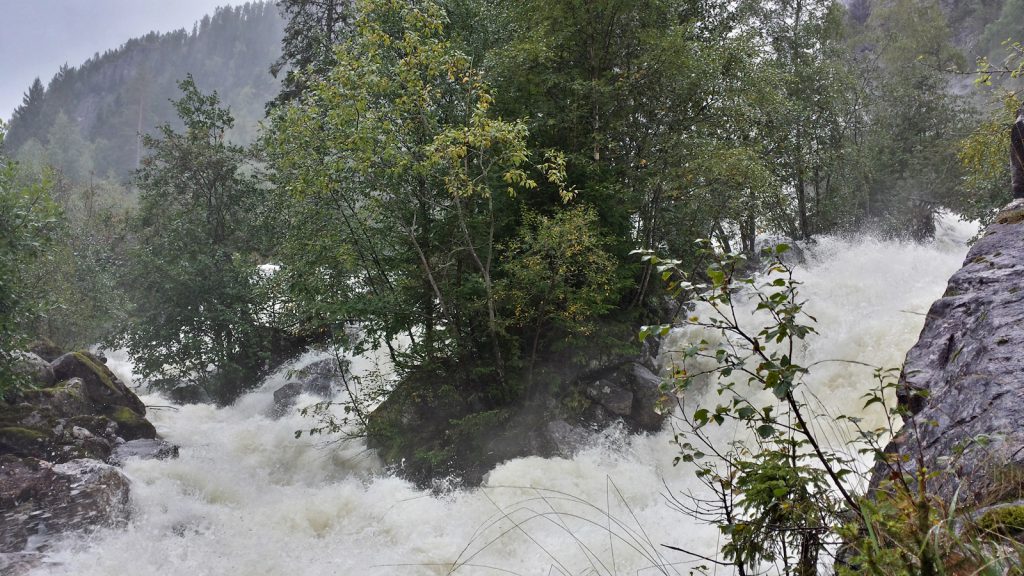 Along RV 9 road from Kristiansand to Haukeli, Norway

Riksvej 9, that is the road’s official name, is continuously gaining height on its way from the coast at Kristiansand to Haukeli and reaches its highest point at more than 900 meters above sea level shortly behind the winter sports resort town of Hovden. Here we find a halfway deserted campsite at Hovden Fjellstoge which shall become our accommodation for the night.

We are the only guests far and wide, but whether the adventourus power connections are a reson for this eludes our knowledge. For dinner we are having a barbeque, but soon we draw back into the Didimobile due to temperatures becoming cooler and cooler.