It has stopped raining, so for breakfast we take the local bus to the town center (as an overnight guest the council forces you to pay a kind of tourist tax where in return you receive some cupons for reduced entrance fees and – in our case – free use of public transport) of Garmisch-Partenkirchen, just to enter the next bakery. Despite being a winter sports stronghold the town has managed to keep its provincial charme. 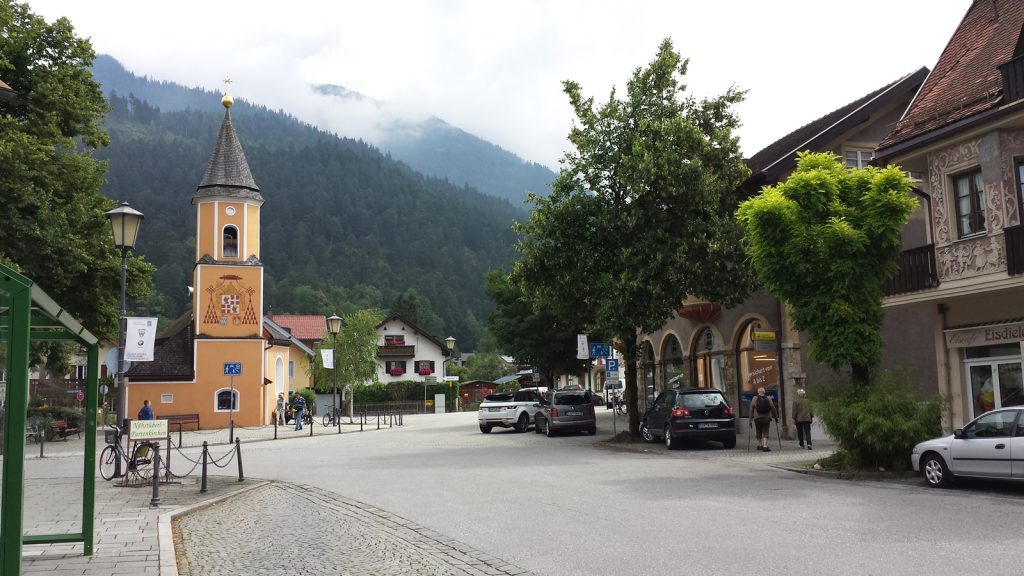 The district of Partenkirchen

After breakfast we are looking for a bus to famous Partnachklamm, a ravine where the Partnach creek has dug deep into the rocks. The gorge can be walked on a narrow path carved out of the rock, which is quite a cold and wet issue due to the narrowness and the many small waterfalls coming down from above. At the gorge’s end there is a beachlike clearing inviting the visitor to relax or build little cairns. 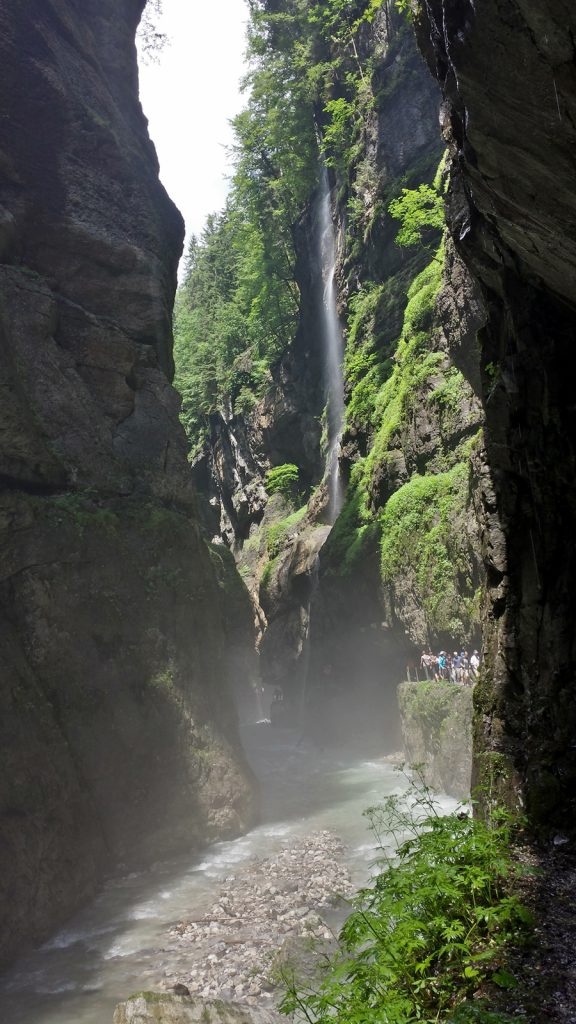 From here the willing hiker has got two possibilities to go back to Garmisch. Either he can go back the path trough the gorge, or he can climb up further past Graseck Forester’s Lodge and take the world’s oldest small gondola ropeway, the Graseckseilbahn, down to the entrance of the gorge. We decide for the latter. Just by looking at the decrepit gondola I can’t help myself but remind me that I urgently have to write down my last will. 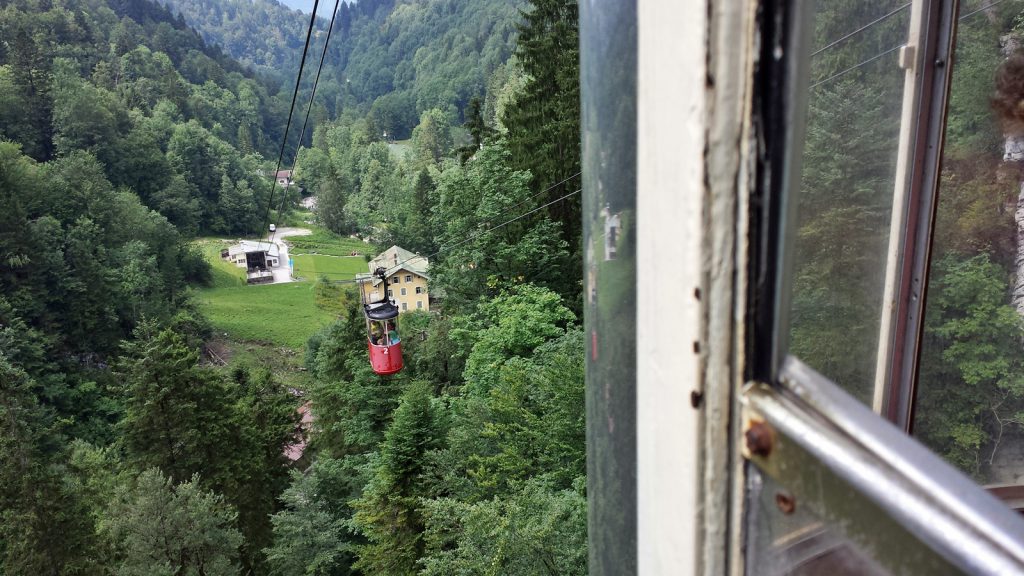 Meanwhile the weather is at its best so we enjoy some rounds on the local tobbogan. On the way back to the Didimobile we come past a supermarket where we spontaneously by some goulash for dinner, because we still have some vanagon noodles left. One thing is that none of us has ever made goulash before, the other thing is that we only realize at home that goulash takes about two hours to prepare. In the end, however, we have made the world’s best goulash that we both have ever eaten – and that is by far not meant ironically. ♥ 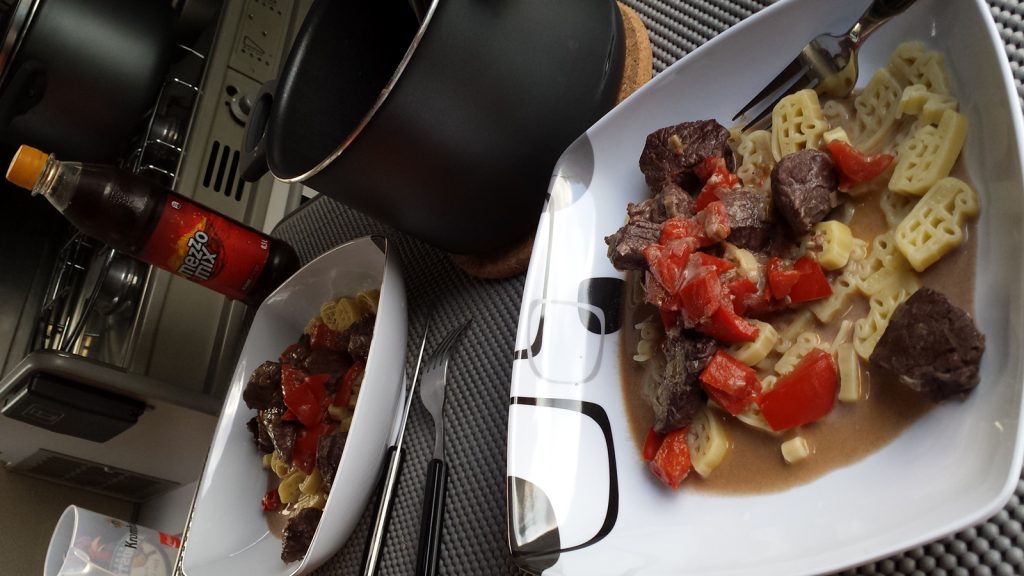 Farewell to the Mountains

Today we have to say goodbye. On Saturday it’s the son’s birthday, and I have promised someone a ticket for a FC Sankt Pauli football home game, but that ticket still lies in a desk drawer at home. Since the Didimobile can only do the 880 kilometers home from Garmisch-Partenkirchen in no less than 13 hours we decide to just drive as far north as we fancy. 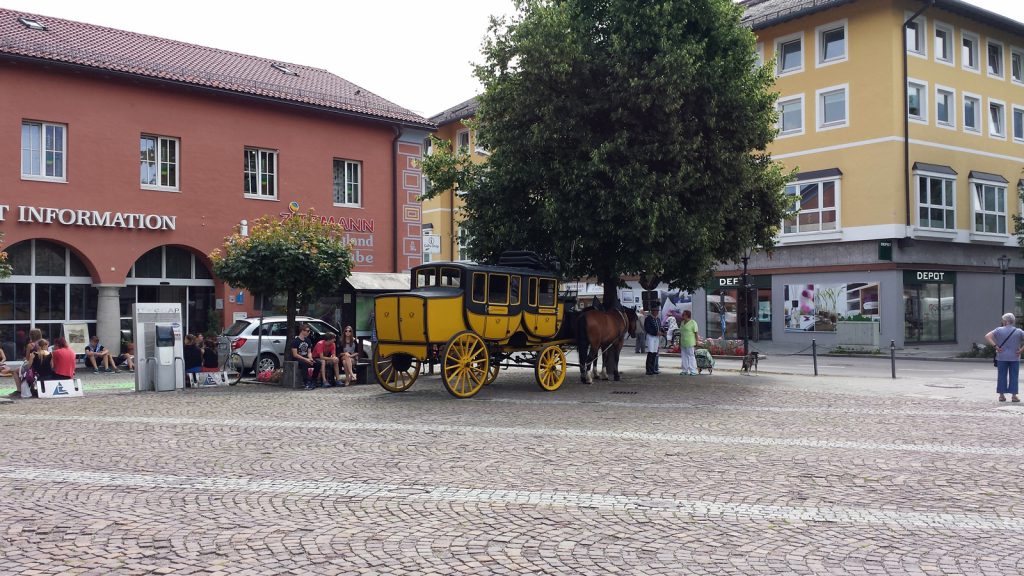 To avoid same routes we decide to take the road via Reutte – Füssen – Autobahn A7 which is quite scenic. After Ulm we don’t feel like staying on the Autobahn, so we leave it for the benefit of country roads. That’s why we now know where our second division opponents Heidenheim and Aalen derive from. 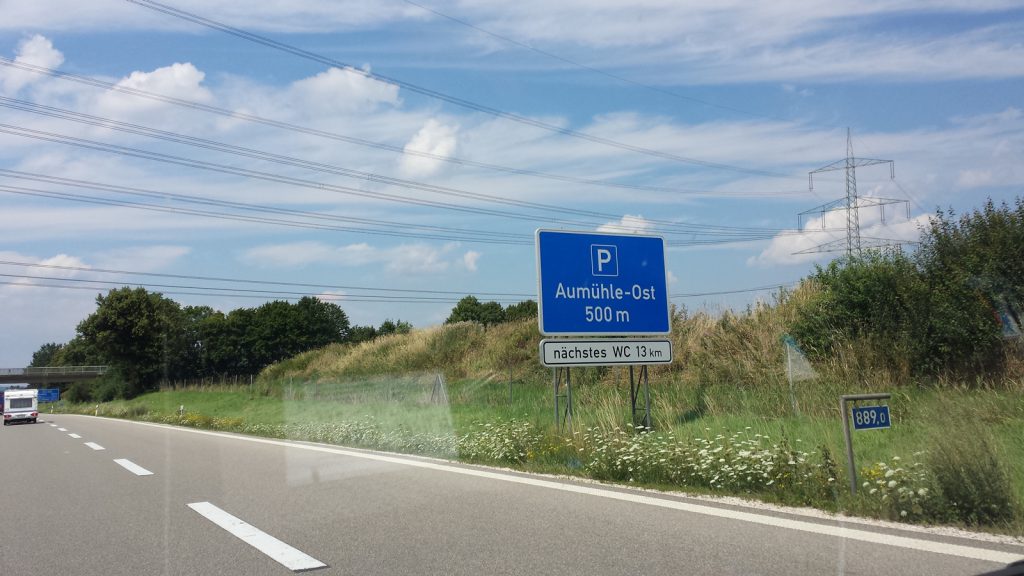 800km south of Aumühle near Hamburg

Around seven o’clock in the evening, after having gone back onto the motorway and having just passed Biebelried junction, we are looking for a nice caravan site and find one far off the beaten track at Forellenhof in Diebach near Hammelburg. 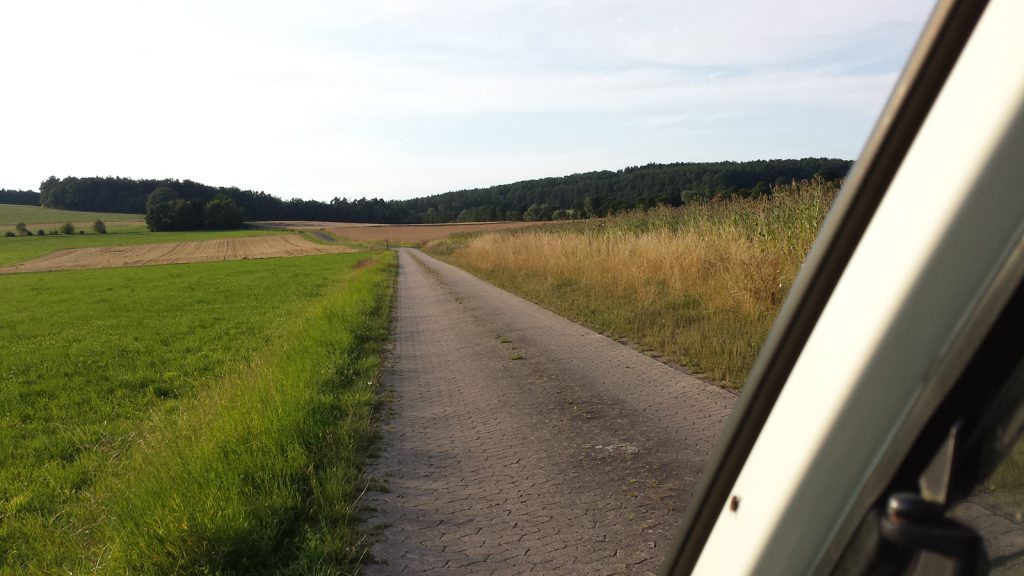 The caravan site is situated quite remotely in the middle of nowhere. A small signpost leads us the way along a gravel road, which we follow for a good kilometre until we spot the first white tops of other campmobiles. We must actually be right here at the end of the world. 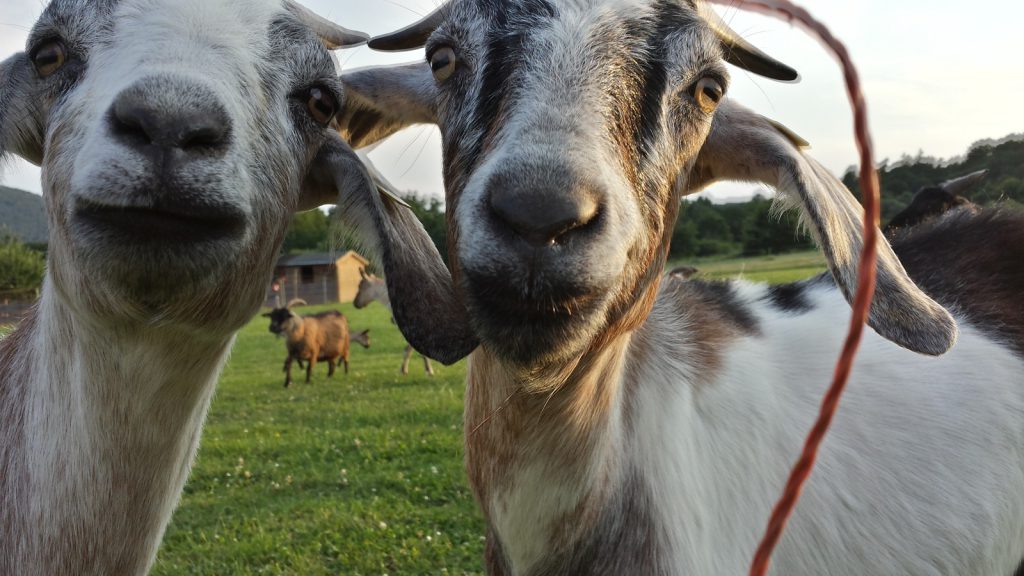 And yes, next to a small tavern with affiliated animal shelters, there is a pretty caravan site with electric hookup and all kinds of facilities. Unfortunately the restaurant is closed today. A lovely camper couple therefore supplies us with a tincan of canned meat so we won’t starve. They had actually planned to stay here for only one night, but today it was there fifth consecutive night here, they tell us. One day we have to go back here, just to see if they will still be there. 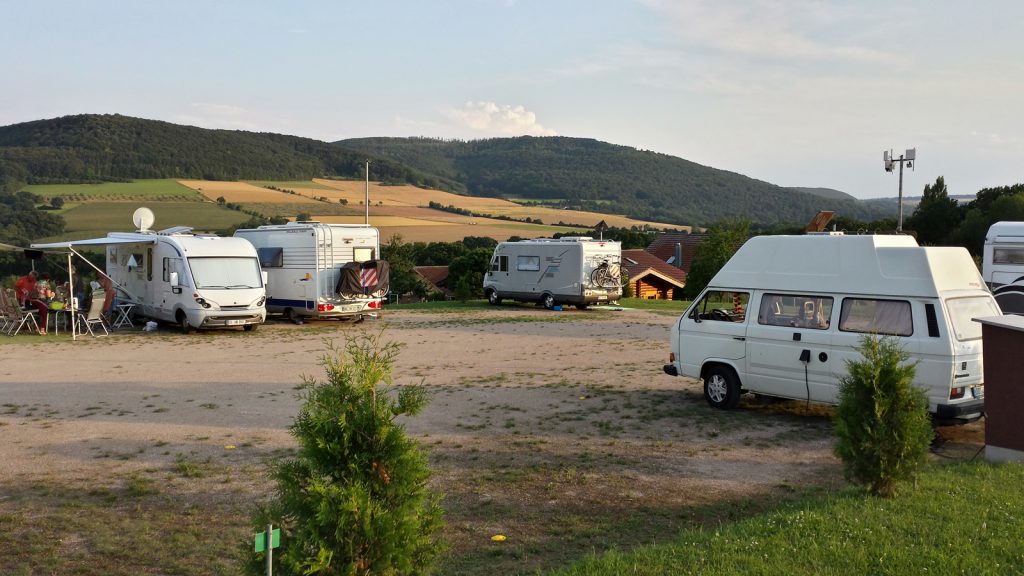 However we decide against the canned meat (we want to keep it for another tour in case we will stay here once again) and order a pizza. And yes, after half an hour a dust cloud becomes visible on the horizon, the pizza service really delivers to the Republic’s most remote caravan site. 🙂 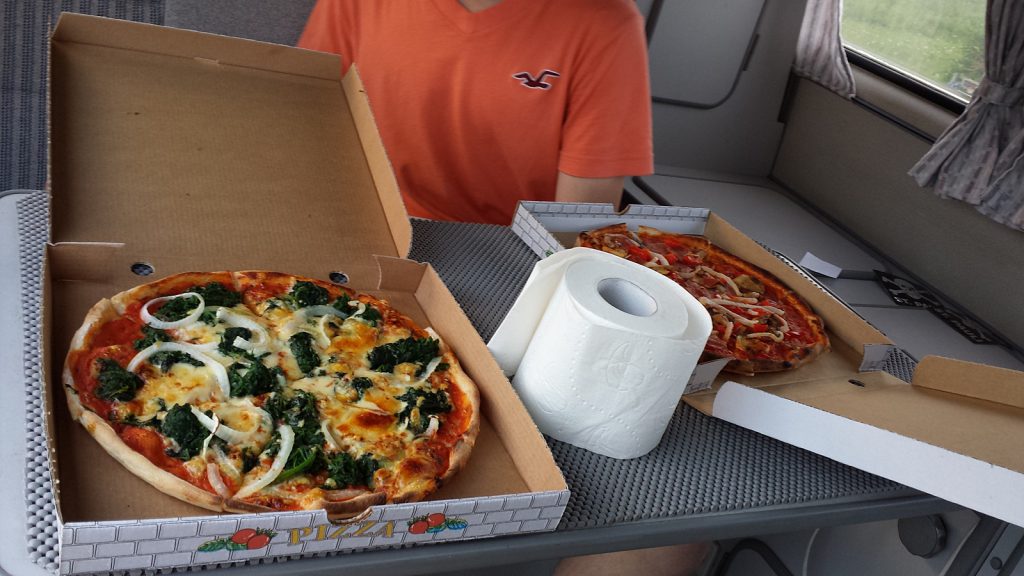 Pizza delivery even in wasteland

On the next day we are heading directly home to Hamburg. After ten days and about 2,500 kilometers the first major Didimobile tour ends way too soon, but the next journeys are already about to commence.